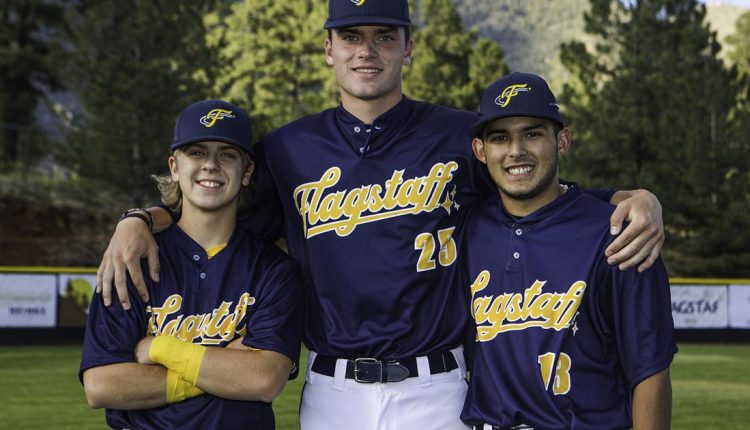 Players have trekked from across the United States to play with the Flagstaff Star Chasers collegiate summer baseball team in its first season, which began earlier this summer.

A trio of players has added a little bit of local flare, though.

Infielder Gabe Faust, catcher Tristen Figueroa and pitcher Justin Hanson are all recent Flagstaff High School graduates, each on their own journey in collegiate baseball but back home for the summer to develop their skills in the offseason.

Hanson finished his freshman season at Yavapai Community College this spring, Figueroa is set to officially sign to play at Oklahoma Wesleyan in the near future, and Faust attended Berea College in Kentucky, but is looking for his new home come fall in the transfer portal.

While each player, in their own position, is aiming to honor their craft and be more prepared for the next season, an added benefit is getting to play together again, just as they did a couple years ago for the Eagles.

“It’s awesome. I didn’t think I’d play with them again after high school, so for me it felt like the last hurrah. But, seeing them on the roster and playing with them again — even if we’re not always in at the same time — is so much fun,” Faust said.

“It’s been great. It’s what I looked forward to, one day being able to play with those guys again,” added Figueroa.

Needing every chance possible to showcase his skills while he attempts to transfer to a new school, Faust was the first to join the Star Chasers. Hanson, looking to develop ahead of his sophomore year, what next. His catcher and friend Figueroa, who shared a hometown and long-built chemistry, was the last of the trio to sign on.

The opportunity has paid dividends to this point. Faust did not play in his freshman year at Berea, and Figueroa just graduated. Thus, both Figueroa and Faust experienced their first college-level at-bats and innings in the field.

“I was nervous, of course, but I got the job done like I needed to,” Figueroa said. “Now I’ve gotten a taste of the type of pitching I might see, so I know what I need to do to prepare.”

Even for the experienced players on Flagstaff’s roster, like Hanson, there are several at two-year schools looking to improve their stock to potentially sign at bigger, four-year schools in the future.

They, Hanson hopes, will be able to do so in their time with the Star Chasers.

“We’re going to try to help some kids out, get some exposure and just have fun playing baseball,” he said.

And, recruiting and development aside, there is a sense of honor unique to what the three local players bring to the roster. Before the Star Chasers began their first-even season this year, there was no college-level baseball in Flagstaff.

Now the trio is part of the first chapter in what they believe could be a long history of success in town.

“It carries a lot of pride. Growing up here going through Little League, high school, representing a smaller portion of Flagstaff and now to represent the entire city at a very high level is a great feeling,” Faust said.

Flagstaff is set to visit Prescott for a three-game series beginning Friday.

Phoenix Center to look at needs of Jacksonville LGBTQ community