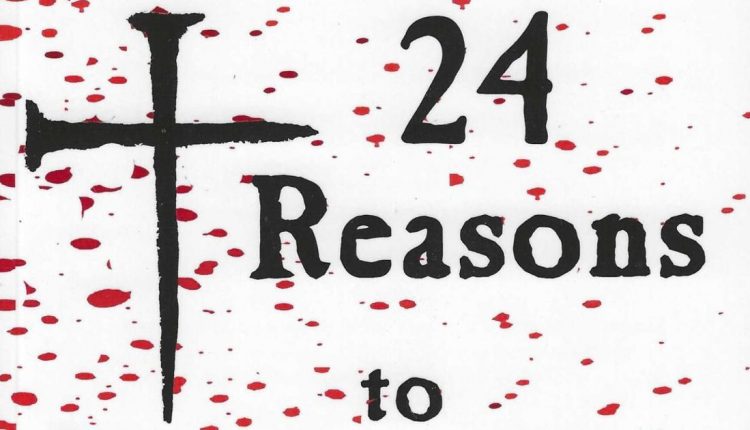 Special to the Arizona Daily Star

Not to put too fine a point on it, author Charles Bufe is dismayed by Christianity. To demonstrate why, he enumerates what he considers Christianity’s most destructive aspects in an articulate summary of evils perpetrated in the name of the (“probably nonexistent”) Almighty that run the gamut from witch-burning and child abuse to misogyny, homophobia, anti- Semitism and environmental degradation.

Based on fear and powered by coercion and hypocrisy, says Bufe, Christian morality is at best an oxymoron and at worst a justification for unspeakable cruelty. He cites the works of philosophers, historians and scientists to support his arguments in this extensively footnoted and indexed book which includes a bibliography running to several pages. The wording of the title was deliberate, he notes, to avoid dictatorial language, because attempting to suppress belief is not as effective as providing information with which to make an informed choice.

Tucsonan Charles Bufe is the author, co-author, translator or compiler/editor of 13 books.

The ties that bind are at the heart of this deeply moving account of one family’s unraveling during the cultural and political upheavals of the tumultuous 1960s. The Hamiltons were the quintessential, All-American family until everything was changed, pitting the conflicting ideologies of brother against brother and driving them from home, one to Vietnam and the other to Canada. The fateful ramifications of their decisions would splinter the family for decades until the intercession of their dying sister.

Told from the perspective of the youngest Hamilton brother, born too late to be more than an observer of the drama and, subsequently, the mediator piecing it all back together, this highly readable novel offers a window on an era in American history when the rules were rewritten and the concepts of honor and patriotism diverged. Author Jeff Hartman is a retired educator who lives in Tucson. This is his second novel.

“Flourishing in the Desert: A Novel of Resiliency, Courage, and Connections” By Deborah A. Lonergan. Independently published. 270 pp. $15.99; Kindle $5.99.

Preparing for adventure with her newly-retired husband of 40 years, Holly instead finds herself suddenly widowed. Are new beginnings possible? Leaving friends and family behind, Holly strikes out for aptly-named Nirvana, Arizona. Optimistic and comfortable in her relationship with “the Divine,” Holly’s path to rediscovering herself involves making new friends — including a rescue dog as sensitive to spiritual energy as she is — and reigniting an old flame, an unanticipated trick the universe had up its sleeve for her.

A second chance at love is not the only surprise the universe has in store, but Holly is nothing if not open to new experiences in her mystical Sonoran Desert surroundings. Author Deborah A. Lonergan, who describes herself as a spiritual seeker, lives in Tucson. This is her first novel.

From its humble beginnings in a tiny South Fourth Avenue warehouse in the mid-1970s, the Community Food Bank of Southern Arizona has become one of the most respected in America, with a $125 million budget and more than 6,000 volunteers.

Its founders, discouraged by the ineffective Food Stamp Program and by the amount of food they saw being wasted, were committed to ending hunger in Tucson — and the rest is history, recounted here by Seth Schindler in an engaging, profusely illustrated, chronological account.

The Community Food Bank owes its success in large measure to dedicated, enthusiastic staff and volunteers; many of their reminiscences are included, providing the text with an up-beat, personal vibe. The charismatic Punch Woods, longtime executive director, is central to the story; his goal of putting himself out of a job by making food banks unnecessary was not realized in his lifetime, but, as Schindler shows, his forward-thinking organization is continuously innovating, blazing new pathways out of poverty.

Don’t mistake this book for a victory lap. Rather, the author’s intention is to demonstrate how communities can win the war against hunger, and he succeeds admirably. Seth Schindler is an anthropologist and former curator of the Arizona State Museum.

“Everything in Creation,” says author Eugene Sierras, “is connected by the energy of a universal force.” It’s a concept about which the author has given a lot of thought. Influenced by catastrophist Immanuel Velikovsky’s 1950 bestseller “Worlds in Collision,” Sierras suggests that Earth suffered close contacts with other planets during ancient times with cataclysmic results that may be inferred from scripture.

Framed as a conversation between two friends — one a Catholic priest, the other a Navy pilot — Sierras offers a complex synthesis of comparative mythology, science and religion as the two friends enjoy a wide-ranging discussion about the nature of the Kingdom of Heaven. The author chose a graphic novel format to mitigate the complexity of his topic. A retired Naval flight officer and the author of several books, Sierras lives in Tucson.

This fascinating memoir is worth the price of admission for its first “act” alone. In a time when works abound about World War II in Europe, you don’t see much about life under Japanese siege in Asia. “A Life in Three Acts” remedies that. dr Solomon K. Samuels was born in Burma in 1930, the son of an educated Christian Indian working in Burmese civil service.

In remarkable detail, Samuels describes war and Japanese occupation and his family’s disintegration. Samuels’ second and third “acts” — covering his hard-won medical education, Burmese independence and consequences, and his emigration to the US — demonstrate historic insight and admirable personal discipline and tenacity.

“Bear Child” is Rick Church’s fifth Noel Two Horses mystery. A Stockbridge-Munsee Mohican, Two Horses is an ex-cop who runs a private investigation firm from his Prescott mystery bookstore. Tucsonan Church knows his territory, as he’s a member of the Stockbridge-Munsee Mohican Nation himself and a Vietnam veteran with a background in state and federal law enforcement. What you see in this book includes law-enforcement territoriality, corruption in police ranks, reservation and border issues, and disrespect for natives.

Noel Two Horses gets called in, and as the Chicago detectives go after Bear Child, the FBI pursues another, related case. No jurisdiction consults with another, and, when Two Horses’ young assistant is murdered, he’s determined to protect Bear Child and nail the killer.

Rick Church keeps the action going, and laces his dialogue with entertaining, cop and intertribal ribbing. It’s enough to make you check out his other mysteries.

John L. Abraham pulls no punches in this account of his personal and professional life as an Episcopal priest and his disappointment in organized religion. The retired priest is a thanatologist — a speaker, trainer and consultant focusing on patient health care and end-of-life issues. In his 22 years as an active priest, Abraham served 10 congregations. Things didn’t always go smoothly. His ’60s participation in student and anti-war demonstrations may not have prepared him for pastoral life in a staid, hierarchical institution that’s resistant to change.

Abraham chronicles serving churches from DC to Tucson, at times getting crosswise with parish culture or the ecclesiatical administration … the most rancorous occurring in a certain large Episcopal church in the Tucson foothills.

Abraham’s book denounces hypocrisies of organized religion. It elucidates commonalities among world religions — including beliefs he has long abandoned. These are not sympathetically presented. What it does, however, is present a heartfelt, informed argument for dignity in death. And it provides resources for compassionately addressing the inevitable in life.

Helene Woodhams is retired from Pima County Public Library, where she was literary arts librarian and coordinator of Southwest Books of the Year, the library’s annual literature review.

Christine Wald-Hopkins, a former educator and occasional essayist, has long been a book critic for national, regional and local newspapers.

If you are a Southern Arizona author and would like your book to be considered for this column, send a copy to: Sara Brown, PO Box 26887, Tucson, AZ, 85726-6887. Give the price and contact name. Books must have been published within a year. Authors may submit no more than one book per calendar year.

State Briefs: EV Plan and this week’s lane restrictions on I-17 | The Verde Independent