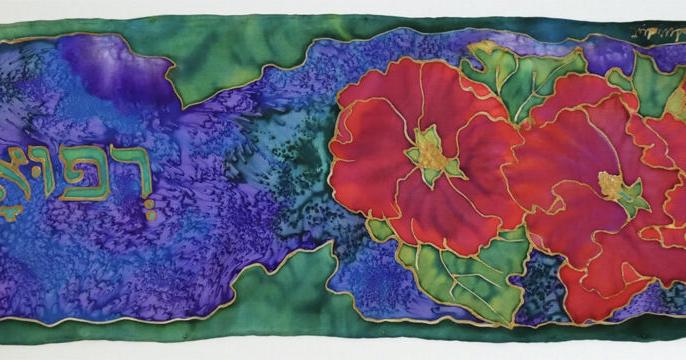 Artist Beth Surdut is a wildlife illustrator, environmental educator, stained glass designer and writer. She began painting on silk in the 1980s, starting with scarves, which have been on display at the Smithsonian, in Washington, DC, and then moved on to larger paintings. She also creates chuppot, Torah covers, tallitot and healing scarves.

She first got the idea to create a tallit while sitting in temple at HaMakom: The Place for Passionate and Progressive Judaism in Santa Fe, New Mexico.

“I belonged to a wonderful congregation, and it was so small that we could sit in a circle and you could see who you were davening with,” said Surdut. “I thought, ‘I should start doing custom prayer shawls,’ which personalize that invitation into what I think of as a portable house of prayer.”

She talked to her rabbi, Rabbi Malka Drucker, about the idea and she said, “Great, I’ll buy one.”

People started commissioning her to make custom tallitot. Her clientele varied from kids to adults, with many women in their 60s, or older, who hadn’t had a bat mitzvah. She starts the process by interviewing the individual and asking them about their interests, what makes them happy and if they had a day to do anything they wanted — and if money and time travel were taken care of — what would that day look like?

As people discovered that she was a wildlife illustrator, they also began asking her to put animals on their tallit. There was one client who had three Sulcata tortoises and she wanted one on her prayer shawl because of what the animal represented to her: “ancient wisdom, a creature that has lasted for so long and has been in the universe for so long.”

Surdut also likes to suggest that people put the Hebrew names of their family members on the corners. “During services, when you gather those four corners together, you’re gathering your family together,” she said.

The tzitzit on the tallit come from Israel. “I think of them coming from very happy sheep,” she said. “There is a directive that the wool for the tzitzit needs to come from sheep that are clean and don’t have burrs and dirt in them. So, I picture happy sheep that are gently and lovingly sheared.”

Surdut’s first introduction to Tucson came in 2012, when she visited the annual Tucson Festival of Books. The following year, she returned to accept the festival’s Literary Award for Nonfiction for “Listening to Raven,” a compilation of illustrations, stories and personal essays. In 2014, Surdut gave a presentation, “The Modern Tallit,” at the Tucson Jewish Community Center and during that visit, she was featured in shows by Arizona Illustrated and a radio piece on Arizona Spotlight. Drawn to the wildlife in Arizona, she moved from Santa Fe to Tucson in 2015.

She started making refuah shleimah, healing scarves, to represent “the essence of the Jewish Mi Shebeirach prayer said aloud in direct recognition of those in need, in pain, in suffering.”

The first one was a request from a former tallit client who had a friend who had lost her hair due to chemotherapy treatment for breast cancer. Surdut made her a headscarf to wear.

Most of the people she’s made healing scarves for have fully recovered from their illness or injury and went on to wear and enjoy the scarf for many years. She had two dear friends, however, for whom this was not the case.

She met Lynn Saul when Saul was running a writing group at Congregation Bet Shalom in Tucson and asked Surdut to co-team it with her. Miriam Blum joined the writing group and she and Surdut became almost friends.

Blum had numerous health issues; she had open-heart surgeries and was on dialysis six days a week.

“She was writing and was cheerful, bright and funny,” said Surdut. “I would shlep her places in her wheelchair and we would go on adventures together.”

The refuah scarf with hummingbirds Beth Surdut made for Miriam Blum.

Surdut had made a refuah scarf for Blum with hummingbirds on it and after she died, nobody could find the scarf. One day, Surdut was talking to Blum’s husband, Bennett, and he asked why it was so important to her, besides the fact that it was beautiful and she had made it, that he find the scarf. “And I said, ‘Because I made it with kavanah (intention) and it was just for Miriam,’ because my life is guided by paying attention and intention.”

He called Surdut about two hours later to tell her he found the scarf. When she asked him where it had been, he told her, “As soon as you said kavanah, I had a feeling I knew where it was. She had tucked it into her tallit bag.”

“That was very beautiful to me,” she said.

When her friend Lynn Saul was in the hospital, Surdut picked up the book of Saul’s poetry, “In Our Language: Collected Poems,” looking for inspiration. The first poem in the book is about hollyhocks, so she painted a scarf with the flowers on it to bring to Saul the next day.

“I walked into the hospital — it’s the first time I put one of my scarves on a dying person — and I put it on her shoulders and she looked at me with these beautiful blue eyes and said, ‘This will help,’ and we both knew what that meant,” said Surdut.

Surdut told Saul’s daughter-in-law to leave the scarf on and not to take it off unless Saul wanted her to. She told her, even though it was silk, not to worry if it got wrinkled, dirty or torn. Surdut said that when Saul was in hospice, the daughter-in-law took the scarf off to wash it. Saul had been in and out of consciousness, but when she woke up, the first thing she said was, “Where’s my scarf.”

“I think we all don’t want to see the people we love in pain and sorrow,” said Surdut. “We wish we could wave a magic wand to clear it all away. This is as close to a magic wand as I can get.” JN

Currently, Surdut has an exhibition at the Beth Shalom Temple Center in Green Valley called “Listening to Raven: Drawings and True Stories.” It is on display through Feb. 26. For more information, visit bethsurdut.com.