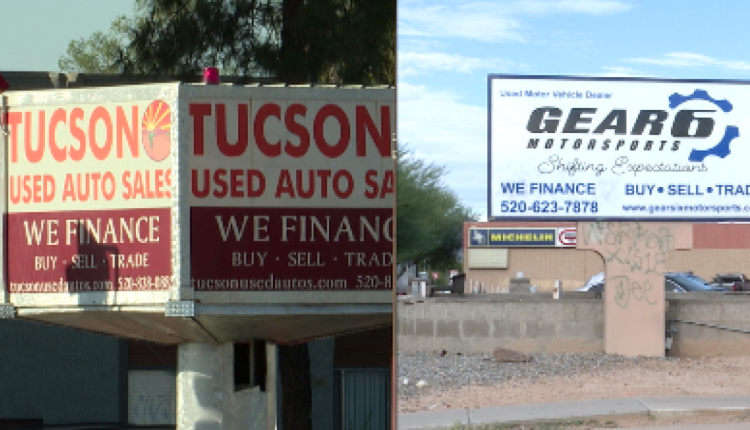 TUCSON, Ariz. (KGUN) — KGUN 9 is following up on a story we first told you about a few weeks ago. Two Tucson veterans had problems with a local used car dealer here in Tucson, leaving one woman paying for a van she didn’t receive and another paying for vehicle repairs out of her own pocket.

KGUN 9 followed up with them to see if the dealership corrected their situations.

Veteran’s Emily Landsverk and Sandra Barger both said they had issues after purchasing vehicles from Tucson Used Auto Sales and Gear6 Motorsports, both owned and operated by the same owner.

Landsverk was left paying for a van she never received and Barger was stuck with the repair bill for a vehicle she bought at the dealership.

Since our initial report the dealership has paid Barger $3,000 to cover some of her repair costs. She says the process still took some negotiating.

“It was a negotiation process because they were trying to knock it down even less, making excuses,” Barger said. “Because they had a fire at their dealership and about the lack of funds in their account.”

As for Landsverk, the dealership never gave her the van. The dealership did show us they paid off the van with Tucson Federal Credit Union, and wrote Landsverk a check for around $3,000 to compensate for her hardship.

We reached out to Steve Garcia, who was hired as the general manager to help correct these issues. He no longer works there.

“Be very vigilant when when you’re working with smaller dealerships, know where they get their stuff, get your Carfax look at the vehicle,” Barger said. “If you are not a mechanic, take your vehicle somewhere else to get it looked at.”

——-
Denelle Confair is an anchor and investigative reporter for KGUN 9. It’s been her dream to tell your stories for the past decade. She is extremely curious and wants to continue to use her storytelling for the greater good. Share your story ideas and important issues with Denelle by emailing [email protected] or by connecting on Facebook, and Twitter.