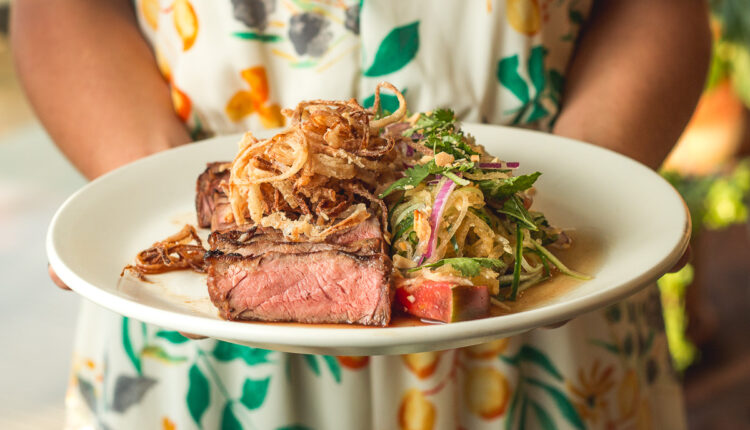 Seven years ago, Tucson was designated as an official UNESCO Creative City of Gastronomy. Today, Tucson City of Gastronomy (TCoG)a non-profit tasked with promoting and leveraging the designation, is celebrating the anniversary by unveiling the video “Sonoran White Wheat: A Heritage Grain Revival.”

the video produced by TCoG and directed by local creative agency BRINK, highlights the revival of Sonoran White wheat as part of our region’s culinary distinctiveness. It’s the first in a series being developed with federal American Rescue Plan Act funding from the Pima County Attractions and Tourism Office.

Additionally, the series sheds light on why Southern Arizona tastes like nowhere else, with a rich culinary heritage spanning more than 5,000 years and a border that encompasses distinctive Native American, Mexican, Spanish, Chinese, and African American food traditions that have blended here.

“These videos are the culmination of combined efforts by TCoG, Pima County, and Visit Tucson over the past seven years,” said Jonathan Mabry, TCoG’s Executive Director. “We’re designing them to shine a spotlight on Tucson’s deep and multicultural food history, and on our vibrant food scene, to attract more visitors who will stimulate the local economy.”

PUTTING TUCSON ON THE MAP

This year, Tucson’s heritage grain movement was thrust into the national spotlight in June when Don Guerra of Barrio Bread won the James Beard Award for Outstanding Baker. Guerra is a staunch advocate for utilizing heritage grains dating back to the 17th century, when the Spanish missionary Father Eusebio Francisco Kino first introduced Sonoran White wheat to the region.

While the use of locally grown heritage grains is expanding among local bakeries, breweries, and restaurants now, Guerra’s “local grain chain” vision was revolutionary when he began honing his skills from his Tucson garage in 2009. “Don’s labor of love is shared by many of the restauranteurs, farmers, ranchers, and producers in Tucson and Southern Arizona,” said Mabry. “They are dedicated to preserving and celebrating our culinary heritage in creative ways that are tied to this place.”

BIG THINGS ON THE HORIZON

Since Tucson earned the UNESCO designation in December 2015, TCoG has taken the lead on leveraging the designation to increase appreciation of our food heritage and culinary assets, highlight them on a global platform, and link them to economic development. It currently certifies 52 restaurants, 27 food and beverage artisans, four caterers, and nine local food retailers for innovation and leadership among local food businesses.

He has trained and sent Chef Ambassadors to Sister Cities of Gastronomy in seven countries to promote Tucson’s cuisine and food heritage at an international level.

TCoG has also worked to raise awareness of important food issues, such as hosting a Food Justice Expo highlighting more than a dozen food justice community groups at Tucson Meet Yourself over several years.

“When we started this journey seven years ago, we had no idea how much energy it would add to the local food movement and how much it would inspire the creativity of our chefs and entrepreneurs around heritage ingredients,” said Mabry.

Janos Wilder, TCoG board director and a James Beard Award winner, stated that “the impacts have grown exponentially, and we want to increase our local connections to expand our reach, impacts, and funding so we can contribute to how the UNESCO City of Gastronomy designation takes on new meaning to the community over the next seven years.” Mabry says the non-profit has ambitious goals for 2023, including expansion of the Pueblos del Maiz Fiesta, an international event that TCoG produced for the first time in May of this year. In 2023, a grant from the Arizona Office of Tourism will connect Pueblos del Maiz to two other long-standing annual heritage events — the Agave Heritage Festival other Tucson International Mariachi Conference — all of which occur in quick succession.

In June, TCoG will send several Tucson bosses to the 2023 Lyon Street Food Fairthe largest of its kind in France, to sell street food and educate the 40,000 attendees on Tucson’s food heritage.

Also in the works are an update of its 2019 directory of more than 150 unique Southern Arizona food and drink products crafted with native, heritage, and wild-harvested ingredients, a new annual awards program for local Food Heroes, and partnerships to provide a path to higher paying management positions for top graduates of local culinary programs. With a recently received USDA grant, TCoG will team up with the University of Arizona, Arizona-Sonora Desert Museum, and Local First Arizona to identify and promote climate-smart food crops.

Tucson City of Gastronomy formed in 2016, with the mission of “Growing a sustainable desert community by supporting our creative food cultures.” The organization’s most important purposes are to meet UNESCO’s objectives sufficiently to keep the designation, and to leverage the designation to broadly benefit the community. Visit our website at tucson.cityofgastronomy.org.