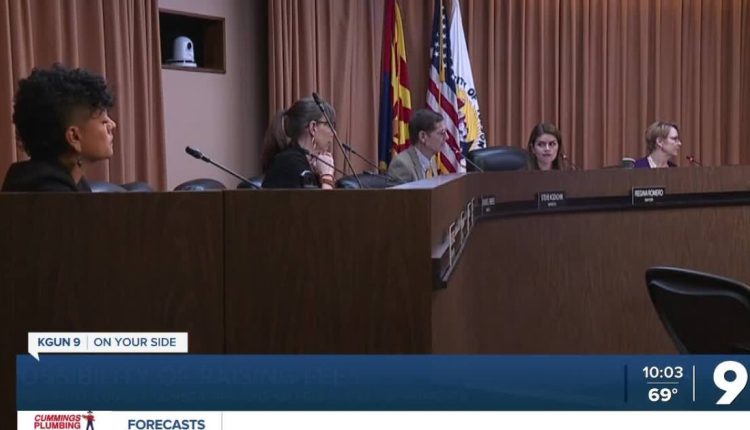 TUCSON, Ariz. (KGUN) — At their regularly scheduled council meeting, The Tucson City Council and Mayor Regina Romero started a process for public input on raising fees, but are also considering some fees at a later date.

They are considering raising fees for parking, water, garbage collection, parks, and transportation.

The Water Department is proposing to raise their surcharge from 70 cents to one dollar.

John Kmiec, the director of Tucson Water said even though fees have been going up every year, the increase in water fees is related to the drought.

Kmiec said the department would collect around $5 to 8 million in fees over time.

However, some Tucsonans say increasing the water fee isn’t a good idea during a time of high inflation.

“We moved to this town because of what it offers and everything like that and because of the pricing, so the fact that they’re raising it, it’s like why? Nothing’s changed,” Tucson resident Ashley Zirkle said.

On Tuesday the City Council decided they would be getting input from residents about the water fee in January.

They will also be getting input from residents about increased fees for environmental services at the same meeting.

The mayor and City Council are also considering raising Park Tucson fees next year through 2027.

However, one Tucsonan said raising the fees won’t make a difference.

“I don’t know that they would make any more revenue on it because the volume doesn’t seem to be as high of people going out anymore,” Tucson resident Thomas Slanina said.

The City Council and mayor are also considering raising fees for parks and adding a fee to rent fields.

One resident said it shouldn’t be a priority.

“I think we could get back to the drawing board and think of other things to raise taxes on,” Tucson resident James Diaz said.

However, some residents like Randall Reynolds said the fees wouldn’t impact them, but they would impact residents who aren’t as financially stable.

“It won’t affect me that much, but it will the poorer people in our community. They’re the ones that get victimized by raising the fees,” Reynolds said.

The mayor and city council decided to consider increasing the financial impacts of the parks, transportation and parking fees at later date.

As Links to MS Deepen, Researchers Accelerate Efforts to Develop an Epstein-Barr Vaccine