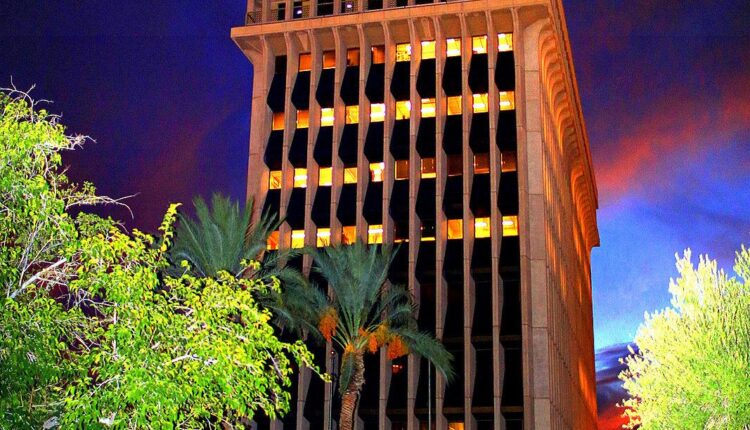 Tucson mass transit users could get another six months of free service if the City Council follows the recommendations of City Manager Mike Ortega.

In March 2020, the Council stopped charging riders of Sun Tran and related transit services as a way to help the community cope with COVID-19. Federal relief money helped keep the program free but that cash will run out on Dec. 31

The old fares were set to start up again on Jan 1, but the Council has been looking for ways to keep the service free.

So Ortega now is suggesting the Council fully subsidize transit service for another six months while officials see if they can find a more permanent funding source.

Options include partnerships with the University of Arizona and Tucson Unified School District. US Sen. Kyrsten Sinema will need to get in good with Democrats sometime. Maybe she can shoot the necessary $10 million Tucson’s way with an amendment to some appropriations package for the Department of Agriculture or some such thing.

During a Tuesday study session, Council members will discuss extending the fare.

The Council has to get a lot done soon and has crammed this week’s agenda with aa bunch of stuff that needs approval – pronto.

For instance, there’s redistricting, which will be reviewed during a public hearing on two proposals to shift a handful of precincts from one Council ward to another.

Council members run city-wide in general elections (although they’re nominated by ward), so there’s no serious gerrymandering going on here. Just some inside baseball turf battles over who gets what.

One option would shift three precincts and the other would change five. It’s not a major overhaul.

The Council is being strongly urged to establish the new precincts as this is the last meeting until the end of the year when the new maps are supposed to be done.

Earlier this year, I strongly urged the Council to create more infill incentive districts like the one in place Downtown.

Well, that one is also on the agenda for extension.

Infill incentive overlay zones are just parts of town the city would like to encourage higher-density development without changing the a bunch of zoning designations.

So they offer the option for developers to build at higher densities.

The district has been around since 2009 but is about to end because of a sunset clause that would take effect in January.

Downtown is in the district’s name but it includes more than that. The boundaries extend to West Starr Pass Boulevard and South Mission Road over to the Iron Horse neighborhood near Tucson High School and then north-south from Grant Road to 22nd Street.

The Council will vote on a change to the city’s zoning code to allow for marijuana dispensaries to be opened and operated with a special permit in commercially zoned areas.

As part of a statewide ballot initiative approved in 2018, recreational marijuana use was decriminalized social equity licenses were established.

As some people in Arizona were – shall we say – stomped under the boot of the pot ban, the initiative was crafted to allow for them to have an inside track on some of the dispensary licenses.

However, licensees can’t open a business without the change in zoning that lets them operate. These licenses must be turned into businesses by October 2023. So the Council has to get a move on.

The Council will also vote on a pair of economic development incentives for a two companies looking to add high-end jobs to Tucson.

The big one would give American Battery Factory up to a $4 million break on construction sales taxes as the Utah-based company looks to build a 2.2-million-square-foot lithium ion plant near Tucson International Airport.

The company claims to be planning to add up to 1,000 jobs with average pay better than the median income.

The second, Sion Power, is looking to add 25 jobs in Tucson to the 100 the plant already has on the rolls. These positions would be paid about $88,000 — well above the threshold required for the tax benefit.

The incentives in waived construction taxes would not exceed $278,378.

Turns out, public safety workers find it challenging to find childcare as police and fire work shifts during all hours of the day and night.

Mayor Regina Romero has an idea to fix that: work with the Erik Hite Foundation to create a childcare facility for these highly essential workers. They’re probably going to want to go for facilities – plural – near police substations and fire houses.

Maybe they can come up with a voucher?

Either way, it’s not a bad idea given the labor shortage and the need to fill key positions.

The job market still favors the buyer, folks, and workers have the power, for now.

Council members will discuss the suggestion during an end-of-year study session Tuesday but there’s nothing close to a policy. Romero is only bringing an idea to the table.

It’s not secret that police officers are suddenly hard to find. There are a lot of difficult/sticky situations as to why and this is one of those few issues where both sides – police and the activists who bird-dog them – have points.

It’s worth a chinwag.

The Council will get an update on the Housing Affordability Strategy for Tucson. They call it HAST, for obvious reasons.

The plan was adopted a year ago and has 10 policy prescriptions that involve building city-owned rental units, giving developers incentives and seeking outside funding.

What this will come down to is what everything comes down to and that’s how does a city address a housing problem without much of that thing called “money.”

Utilities use public rights of way to transmit their cable, internet, gas or electrical service to customers. The good news for the industry is that a single land owner requires a single agreement. The bad news is that the land owner is the public and the public asks for a some flesh.

It doesn’t have to be a pound, but the city will ask for something thrown in for the people. They haven’t really negotiated anything and state law does limit what cities can request/demand.

Currently, TEP (and its customers) pay a 4.5 percent franchise fee that goes into the city coffers and this includes a separate utility tax.

State law limits the franchise agreements to cover access to rights of way and the terms under which a utility must operate when servicing equipment.

TEP’s current deal ends in 2026 but the utility wants to hold the said election in 2023.

I find this interesting.

The Legislature makes it extra hard for the people to practice direct democracy on issues they actually care about but insists voters sign off on this technical agreement the people almost certainly do not understand.

As my college neighbor Jeffe of Brooklyn would say…yeah, well, whatever. Y’know?

Raises and bennies for Pima workers

Meanwhile, the county? Not really doing a lot.

Sheriff Chris Nanos is asking for a 7.5 percent raise for correctional officers. The minimum pay would increase from $22.58 to $24.27 per hour.

Pima County’s jails have lost 30 percent of their work force since the depths of the coronavirus pandemic in 2020.

So the county’s administration staff is recommending Nanos get his money.

These raises will cost $1.7 million.

In other personnel moves, the county is looking to give employees 40 hours of sick time for new employees and let them accrue 24 additional hours every step up the classification ladder that determines their compensation.

The maximum leave time would be capped at 320 hours – 80 more than now allowed.

Supervisors are also slated to vote on giving $5,000 to Tanque Verde High School’s class of 2023 to host a party at Golf-N-Stuff.

The party would run at from 9 pm until 5 am, and be under the supervision of the police and parents. Because cops and parents are exactly what ever high school partier wants to see at their graduation bash.

However, let’s not be too snarky because the money comes from anti-racketeering funds. RICO funds can be something of a black box for law enforcement (like buying speedily delivered model airplanes and such). So kudos for trying to do something nice, for somebody else.

It would not be a Pima Supes meeting if Republican Steve Christy weren’t holding the county Elections Division’s feet to the fire over something.

He wants an after-action report on how the election went off with a nod toward costs.

Notice he’s not asking for the election results to be thrown on account of bamboo and international space lasers. He’s conspiratorially adjacent, so he can tell GOP MAGAs that he’s got his eye on the county’s elections team.

For this, Christy wins my inaugural Nigel Tufnel Award for walking the “fine line between stupid and clever.”

The trick is to ask legit questions.

The Santa Cruz County Board of Supervisors will vote to appoint a new county recorder after the retirement of Suzanne Sainz.

Sainz’s replacement must be registered to vote in her party, and that Democrat must live in the county.

The board will then vote on who will fill out the position until it is up for election in 2024.

The South Tucson City Council will vote on how to proceed with the appointment of a city manager and a city attorney. The name of the candidate isn’t on the agenda but right now the jobs of city clerk, city manager and human resources director are being held by Veronica Romero.

So she’s a bit busy to knock out detailed agendas.

The Marana Town Council has invited state lawmakers to a special meeting Tuesday to discuss legislative priorities for the upcoming session.

During the regular meeting, the council will vote on approval of transferring $750,000 from the town’s general fund contingency account to the technology services account for computer equipment