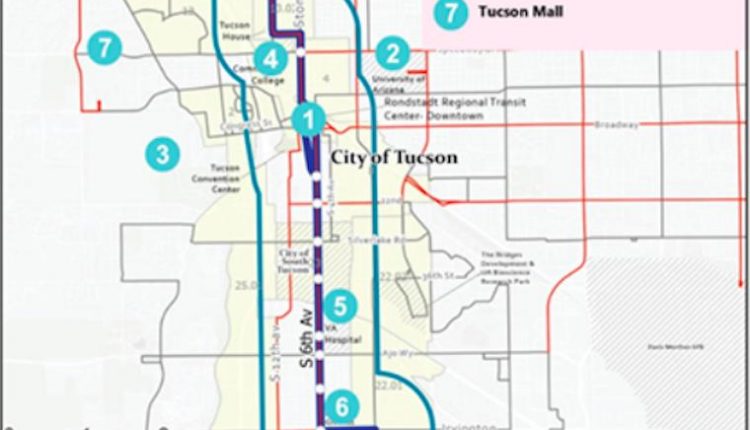 Tucson’s community-led group responsible for reviewing city housing policy will introduce a plan for creating affordable housing along transit routes that run from the Tucson Mall to the international airport.

The CEHD was created in summer 2020 to review plans for affordable housing, protecting barrios and involving landlords and developers in equitable housing goals. The meeting will feature a proposal by the group on how to bring more affordable housing to multiple parts of the city and South Tucson. The commission is made up of 18 members, and a few of them are local government employees like Betty Villegas, executive director of the South Tucson Housing Authority, and Liz Morales, director of the Tucson’s Housing and Community Development Department.

The city has been using $950,000 awarded by the Federal Transit Administration, in partnership with South Tucson, to study the best way to create affordable housing that’s accessible to everyone regardless of “income, race, age and ability” and that prevents “loss and involuntary displacements of residents, businesses and cultural assets,” according to city documents.

The city calls the federally funded effort its equitable transit-oriented development, or eTOD, strategic plan. One of the city’s stated goals with eTOD is talking to vulnerable, underserved populations” including low-income and minority groups, immigrants, low or zero-vehicle households, people with disabilities and limited English proficiency communities.

At the heart of the plan is a 15-mile “north-south transit corridor” that runs along Oracle Road, South 6th Avenue and ends at the Tucson International Airport and extends almost a mile wide in both directions along that route. The CEHD is working on a plan for how to guide investment to that area and trying to include input from people who live and work there.

The transit corridor runs along or near bus routes that travel both north-south and east-west. About 126,000 residents live within the transit corridor’s boundaries, according to the city, and it accounts for about 15 percent of the city’s public transit service area. There are also 2,430 employers with 57,000 employees and 1,900 small businesses with fewer than 20 employees, and the route gives access to 15 areas where there’s a cluster of businesses from key industries like health care, finance, manufacturing, warehouse, aerospace and information technology.

Parts of the corridor also reach 17 different federal opportunity zones, which provide tax benefits to investors in those areas.

Echoing some of the goals of eTOD, city officials wrote that “the proposed route runs through areas of our city that have been historically under-invested, with a particularly high concentration of low-income communities of color and mobility-vulnerable residents that face the greatest transportation barriers due to age, poverty, disability, lack of vehicle access and other factors,”

CEHD wants to be able to recommend financial strategies and city policies — including zoning overlays and design guidelines — that will find vacant properties and land to purchase for future affordable housing and public spaces and increase mixed-income housing and housing types (single-family, multi-family, apartments, etc.). The commission also wants to improve walkability and connections to other forms of transportation along the transit corridor.

The CEHD’s timetable for coming up with an affordable housing plan for the transit corridor began last summer and ends in Winter 2023, when the city is expected to adopt then implement an eTOD strategic plan and start making zone overlays. Right now, the CEHD is in its second phase of planning, which means community engagement, data collection and research. By the end of the year, CEHD should be ready to summarize and publish its research and comments that came from the public.

The city is looking at the Sun Link Streetcar as a model for successful transit-oriented development. The four-mile street care line began operating in July 2016 and has brought in more than $3 billion in public and private investments to the area in and around its route as of 2020.

To Be One in a Million: ‘Who Thinks It’s Going to Be You?’