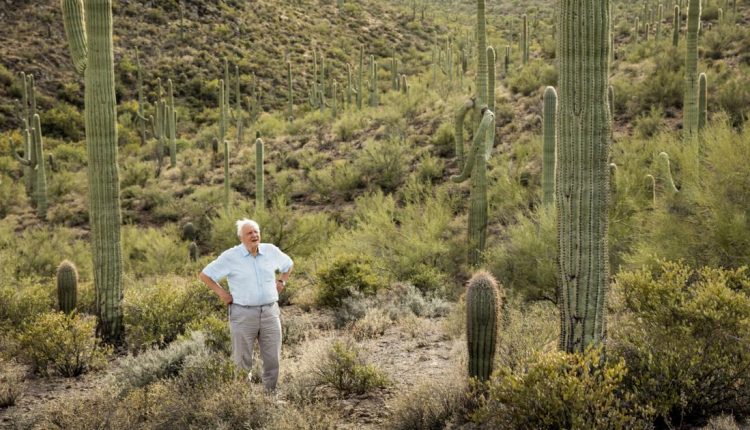 Our little corner of the Sonoran Desert gets the full David Attenborough treatment in a new BBC nature documentary set to premiere on PBS on July 27.

Tumamoc Hill, Saguaro National Park and Phoenix’s Desert Botanical Garden all show up in “Desert Worlds,” the fourth episode in “The Green Planet,” a globe-spanning, five-part celebration of plants narrated by Attenborough.

They were helped along the way by several local experts, including desert ecologist Ben Wilder, who served as academic consultant for the episode.

“It was one of the most rewarding and fun collaborations I’ve ever been a part of,” said Wilder, former director of the University of Arizona’s Desert Laboratory on Tumamoc Hill.

He first met BBC producer and director Paul Williams and assistant producer Lance Featherstone in May 2018, when they came to his office on the hill to discuss the project.

“They asked me, ‘What stories would you like the world to know about the Sonoran Desert?’ I said, ‘Well, I hope you don’t have to go anywhere for the next 20 hours,’” he remembered with a laugh.

The following January, Wilder and fellow local desert ecologists Robert Villa, Trica Oshant Hawkins and Erin Riordan led the BBC crew on a last-minute trip into the Gran Desierto in search of flowers.

Wilder had been tracking the remnants of a hurricane that swept up the Gulf of California and parked itself over the massive dune field near the mouth of the Colorado River. He thought conditions might be right for a rare bloom in the sand.

Williams, the UK-based director, was worried about traveling so far without knowing for sure if the flowers would be there or how long they might last.

“Nevertheless, knowing that this could be our only chance to capture such an event, we gathered our equipment in haste and headed to Arizona,” Williams wrote in a story about the making of “Desert Worlds.”

Wilder said they reached the middle of the dunes — two hours from the nearest road — just as the bloom was hitting its peak.

“We got out of the car and the perfume smell of sand verbena just knocked us off our feet,” he said.

It ended up being the first new footage shot for the miniseries.

The crew would make several return trips to the site over the next two years, staying four or five nights each time to capture the bloom as it waned and the plants as they dried out and dissolved into seeds.

That footage is played forward and backward in the finished episode to show the dunes erupting in purple and white blossoms, then bleaching back to barren sand.


Wilder said some of the long time-lapse shots of blooming sand verbena and evening primrose were actually filmed in a studio greenhouse in Bristol, England, using plants grown from seeds sent from Tucson.

Wilder also guided the crew to Isla San Pedro Mártir, the most remote island in the Gulf of California, where he has been studying a unique relationship between seabirds and saguaro-like cardon cactus for the past 15 years.

He talks about his work on the island in a short “On Location” video that was released along with “Desert Worlds” when the BBC first aired it January.

The mile-and-a-half-wide dome of volcanic rock is home to an unusually dense cactus forest that serves as a nesting ground for tens of thousands of blue-footed and brown boobies.

In return, Wilder said, the birds coat the island in “unlimited fertilizer” that’s too nutrient-rich for most plants but seems to suit the cardons just fine.

Filming on the uninhabited island — about 280 miles southwest of Tucson, as the booby flies — was originally scheduled for March of 2020, but those plans were derailed by the worsening coronavirus pandemic.

Wilder said the crew was about 12 hours from catching a flight to Mexico, and he was packing his car to go meet them, when “everything shut down.”

The production resumed a year later with major COVID restrictions in place, including 10-day quarantines for the filmmakers when they arrived in Mexico and again as they prepared to fly home to the UK, he said.

Videographer Robin Cox films narrator David Attenborough in the desert outside Tucson on Nov. 9, 2019, during the making on the new nature miniseries “The Green Planet.”

The filming in Arizona was much easier to get to but no less exacting.

In the Tucson Mountains north of Gates Pass, the crew erected scaffolding around a crack in the rocks and spent several weeks filming a packrat at night inside its nest as it gathered spine-covered teddy bear cholla buds for food and protection.

At the Desert Botanical Garden, they recorded time-lapses of saguaros expanding and contracting like accordions as they stored and consumed water.

The sped-up footage lasts for about 20 seconds in the finished episode, but it took three years to collect it using remote, solar-powered cameras programmed to shoot one photo every hour.

The garden in Phoenix is ​​also where Attenborough put on a kevlar-lined glove and plunged his hand into a cholla for an on-camera demonstration that still resulted in him getting painfully jabbed with a cactus spine.

The twice-knighted Sir David came to Tucson in November of 2019 to film portions of the episode in the Rincon District of Saguaro National Park and the Tucson Mountains.

During one scene in the park, the then-93-year-old appears to take a stroll through time, as a 1940s black-and-white photograph of a dense saguaro forest dissolves into a present day scene from the same spot, only with far fewer cactuses in view.

As Attenborough explains, the two images document a strong decline in saguaros in this part of the park, but they also reveal the beginnings of a recovery.

Wilder said he was thrilled to get to spend a little time with the world’s best-known nature narrator while he was in Tucson. They say you should never meet your heroes, but Wilder said Attenborough was extremely kind, engaged and interesting to talk to.

The Rincon Mountains and Saguaro National Monument in 1935


The entire crew of filmmakers impressed Wilder with their incredible work ethic, their knowledge of the Sonoran Desert and their approach to storytelling. The plants were always treated as the main characters in the narrative, and every decision the team made seemed to flow from there.

The results blew Wilder away, even when he watched the episode in rough-cut form while it was still in the editing process.

He said the naturalist in him was most excited to see actual footage of how desert plants use the wind to disperse their seeds.

He was also struck by an amazing time-lapse sequence of a saguaro boat being formed, which was cleverly filmed from inside the cactus as it healed around a hole made by a Gila woodpecker.

Even someone who studies arid regions for a living can learn something new from “Desert Worlds,” Wilder said.

“It’s really global in scope,” he said. “It really puts our desert in a global perspective.”

Fort Bowie was an Army outpost the served as the staging point for the hunt for Apache Indian leader Geronimo. It had a short and bloody history…

Established in 1937 by Pres. Franklin Roosevelt, Organ Pipe NM in Southwestern Arizona encompasses more than 330,000 acres, much of it poaching…

The site protects one of the largest prehistoric structures ever built in North America.

The Franciscans began work on the mission at Tumacacori in 1800, but the bell tower was never finished. President Theodore Roosevelt proclaims…

Under-the-radar and usually not crowded: The three national monuments easily accessible from Flagstaff – Wupatki, Sunset Crater and Walnut Can…

The Grand Canyon in Northern Arizona was designated a national park in 1919. Along with Yellowstone and Yosemite, it is one of the crown jewel…

Phoenix calls on artists for a 2023 Super Bowl mural project