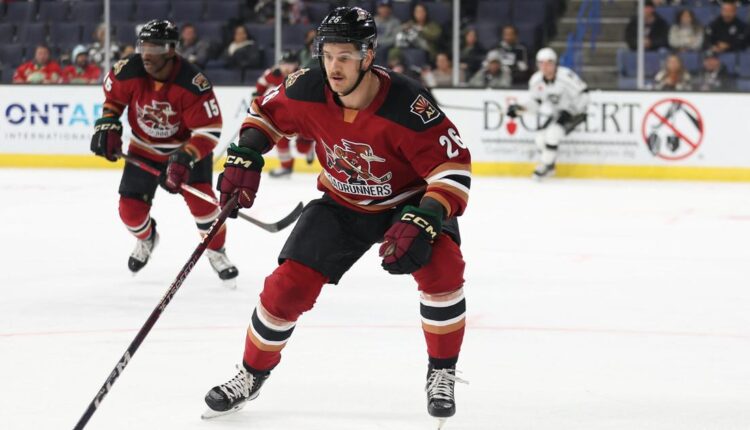 Roadrunners left wing Travis Barron didn’t have a lot of options when he came to the Old Pueblo. He has since found a home.

Barron joined Tucson last season after splitting three seasons between the Colorado Eagles of the AHL and the Utah Grizzlies of the ECHL.

Tucson is “a good spot for me,” Barron said. “Two years ago now, to be honest, (it) was really the only option I had, so I came in here expecting to work hard and hopefully make the team — and I did. And every day’s a new day here.”

“I think he’s coming in with real intent,” said Tucson coach Steve Potvin. “He’s come in with a real good attitude as he always does. He’s a leader, he’s a guy that keeps the guy galvanized in the room.

“Honestly, he’s a guy that we can rely on and depend on defensively and you know what his numbers offensively this year started off pretty good, we’re happy to have him on the team and we know what he does on and off the ice for us.”

Barron, 24, is one of the few Roadrunners players on an AHL contract. Others are on two-way deals, allowing them to move between NHL clubs and their top minor-league affiliates.

“Sometimes there’s scenarios and circumstances that are a little bit different for the American League-contracted guys,” Potvin said. “That’s what we deal with in the American Hockey League. It’s not always real conducive to an equal amount of ice time, and sometimes the business side of things come into play for them and that’s just the reality of it.

“But he’s a guy that knows that and he knows what balance he needs to bring everyday and does a good job of keeping himself going in the right direction.”