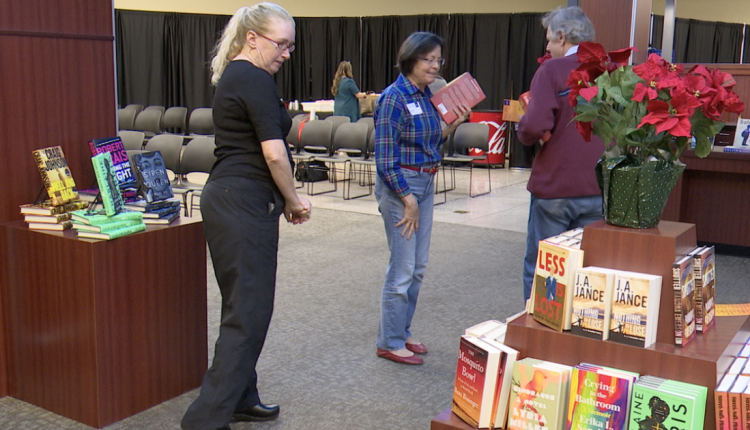 TUCSON, Ariz. (KGUN) — The festival bringing together book lovers from across the Tucson area will be here in just a few more months!

The Tucson Festival of Books isn’t until March, but on Sunday book lovers gathered at the University of Arizona’s bookstore to get a preview of the authors participating in the festival.

Jane Moore has been going to the festival for years, but started volunteering last year.

She said her favorite part about the festival is getting to transport the authors across the campus to each of the events. It’s an opportunity for Moore to get to know them on a more personal level.

“When you escort the authors to the places they’re actually going to be speaking, you hear them, you talk to them, you hear more about their books,” she said.

Moore feels like the preview event is already bringing together the Tucson book community.

“It’s a real privilege to be able to read what other people have written and try to have your own mind sort of expanded by what others have written,” she said.

She said a lot of authors come every year and some have even become people’s favorites.

Some of the authors revealed include JA Jance, Thomas Perry, and Luis Alberto Urrea.

However, other authors who have written children’s books, romance novels, and political books are also participating in the event.

Lindy Elkins-Tanton is one of the authors who will be a part of the festival. She was at the preview event on Sunday and spoke about her book “A Portrait of the Scientist as a Young Woman.”

Her novel details her experiences as a student at MIT

Authors are chosen by a committee. Melanie Morgan, the festival’s executive director said in late summer, people submitted who they want to see at the festival and the committee chose them based on feedback.

“They’re recent books within the last 18 months published by major publishers that were able to get them through the University of Arizona’s bookstore,” Morgan said.

Morgan said the festival itself is free but some of the events do require people to buy tickets.

She said people can make reservations for those events about a week before the festival starts.

Jessica Pryde is on the committee and chose some of the romance authors who are attending the festival. She said she’s been volunteering for a few years and said her favorite part of the festival is getting to choose the authors with people who also love books just like her.

“Being able to commune with all of these people who have been involved with the festival for so long and to share ideas and people and all of that is just really great,” Pryde said.