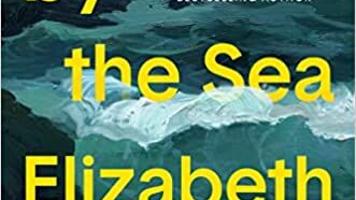 “Best movies of the year.”

If you are curious about the year’s best books, a quick Google search quickly reveals dozens of newspapers, magazines and literary groups that have posted their own year-end lists.

The Tucson Festival of Books is not one of them…but that doesn’t stop festival volunteers from having their own thoughts on the subject. “What was your favorite book this year?” The community volunteers who recruit festival authors were happy to offer a list of their own:

“Lucy by the Sea” by Elizabeth Strout is a story many of us can relate to. With the onset of the pandemic lockdowns, Lucy Barton must leave her life in Manhattan and relocate to a small town in Maine … with her divorced husband and her on-again, off-again friend William. What could possibly go wrong? — Sarah Hammond

“You Made a Fool of Death with Your Beauty” by Akwaeke Emezi has been featured on a number of “best of” lists for romance novels. Meet Feyi Adekola, who is finally ready to live again, five years after the love of her life died. It’s not easy. She is a different person now, and the world is a different place. — Jessica Pryde

“O’odham Lifeways Through Art” by Michael Chiago and Amadeo M.Rea. Released by University of Arizona Press this fall, “Lifeways” features day-to-day scenes of O’odham life painted by Chiago. Each comes with a short narrative by Rea. — Margie Trujillo-Farmer

“Shutter” by Ramona Emerson. One of the year’s most intriguing mysteries, “Shutter” was a finalist for the National Book Award in fiction. It features a crime scene photographer in Albuquerque who often helps investigators crack their cases. Her specialty: homicides. Her secret: She sees the ghosts of the victims, who point her to their murderers. — Gay Vernon

“masa” by Jorge Gaviria. Founder of cult masa brand Masienda, Gaviria has written a love letter on this Latin American staple. Masa wants to be the next “big thing” for home cooks, he says, following hot on the heels of sourdough. Find new ways to perfect the taco. — Jennifer Slothower

“The Many Daughters of Afong Moy” by Jamie Ford. The grandson of a Chinese immigrant, Ford began his writing career with “Hotel on the Corner of Bitter and Sweet.” Here, he continues to explore his heritage with an epic tale about the descendants of Afong Moy: the first Chinese immigrant to step foot on American soil. — Shannon Peters

“Demon Copperhead” by former Tucsonan Barbara Kingsolver is a modern reset of the Charles Dickens classic, “David Copperfield.” It features a 10-year-old boy in Appalachia who charms us even while we’re appalled at his struggles with childhood poverty. — Thea Chalow

“Path Lit by Lightning” by David Maraniss is a deep dive into the life of Jim Thorpe, who became a larger-than-life American hero after surviving a horrific childhood. Thorpe was a Native American who was orphaned on the reservation when his father was hanged. He became the most famous athlete in America and one of the greatest of all time. — Jack Siry

“Racing the Light” is the 19th installation in Robert Crais’ series featuring Elvis Cole and Joe Pike. This time, Cole is hired to find a woman’s missing son. He quickly learns he isn’t the only one looking for the man. Crais will attend the Tucson Festival of Books this spring. — Bill Viner

“Initiating Joy” by Ross Gay is a collection of bright, happy, refreshingly feel-good stories. We are bombarded every day by divisiveness. Here we have a 256-page antidote. — Meg Files

“The Whalebone Theater” by Joanna Quinn. When a dead whale washes ashore near her home in England, a 12-year-old orphan decides to turn its skeletal rib cage into a theater. She then directs plays that provide an escape from her oppressive stepparents. — Kim Peters

“The Goldenacre” by Philip Miller follows a journalist and an art expert looking for the connection between a legendary painting and a series of brash murders. It is a mystery that takes place in the world of art galleries and Edinburgh. — Hilary Hamlin

“The Marriage Portrait” by Maggie O’Farrell is a fictional visit to Renaissance Italy, where we find a 16-year-old duchess who is forced to marry the duke. Her one and only job: providing him with a son. Not exactly the happily ever after she had dreamed about. — Helene Woodhams

Keep current with news from the Tucson Festival of Books by visiting TucsonFestivalOfBooks.org.

Survivors of Gangs and Gun Violence, These Women Now Help Others Navigate Grief

Value on Total in Phoenix