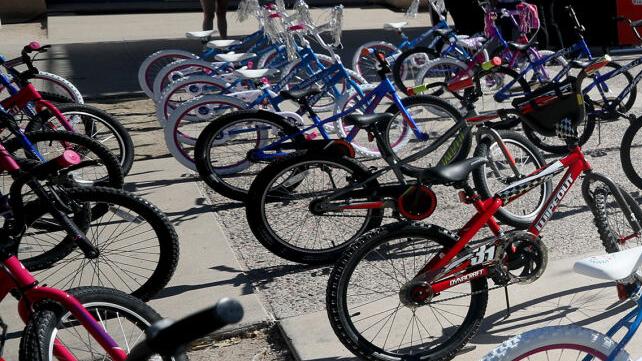 Tucson Bikes for Change is, quite literally, facilitating cycles of giving.

“There are so many physical, social and emotional reasons that a first bicycle is important. Biking is truly healthy for kids: They should be exercising outdoors, and bikes provide a great opportunity for them to enjoy life outside. Bikes also gives kids the opportunity to be mobile, which gives them a bit of independence. And biking is a lifetime activity. All it takes is that first bike to get you started,” said TJ Juskiewicz, executive director of El Tour de Tucson.

El Tour de Tucson is one of numerous partners determined to give kids that chance through Tucson Bikes for Change. Other partners in the project include Tucson Conquistadors, Tucson Electric Power, Canyon Ranch, Jim Click Automotive Group, Pace Ranch, Pantano Christian Church and other faith-based organizations, businesses and government agencies.

“Our purpose is to get kids cycling. Many of these kids have never seen bikes like these and don’t necessarily have the means to obtain a bike. We felt it would be a great idea to give a whole bunch of bikes to kids right before the holidays and just in time to ride in El Tour de Tucson if they want,” said Juskiewicz.

The prospective cyclists and their families will receive bikes — along with helmets, locks and T-shirts — with the assistance of Serve Our City volunteers at locations citywide. Each recipient will also receive free registration in El Tour de Tucson Kid’s Fun Ride on Saturday, Nov. 19.

Juskiewicz is excited about promoting awareness about the impact of El Tour de Tucson on the community. More than 50 local nonprofits partner with El Tour to fundraise, including Ronald McDonald House Charities of Southern Arizona, Big Brothers Big Sisters of Southern Arizona, Beads of Courage, ALS Association Arizona Chapter, and many more.

“Sometimes I think people don’t know a whole lot about El Tour de Tucson and the amount of good that it does in the community. We have helped to raise over $100 million for charitable causes in the community since we started 39 years ago, and many local nonprofits have teams that ride with El Tour as part of their main fundraisers. It’s more than just a bike ride and getting kids bikes is just another example of how we are sharing some love,” Juskiewicz said.