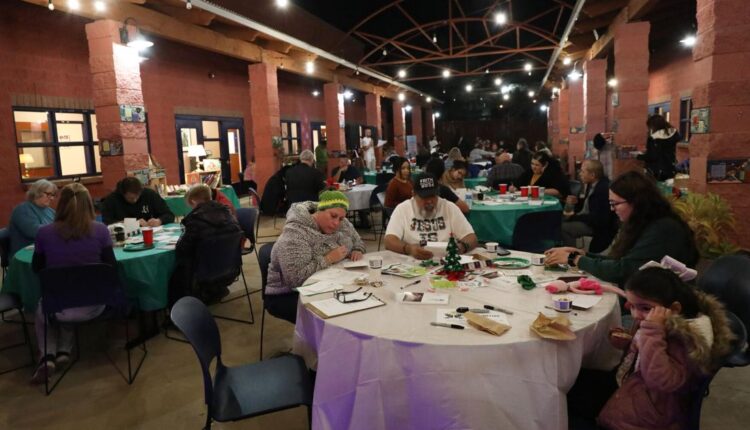 Dozens of Tucsonans turned out to write holiday cards and send messages of hope to some of the thousands of people incarcerated in Arizona prisons.

It was still a balmy 65 degrees after the sun dipped out of sight, but between the lights, decorations and holiday music and cheer, the courtyard of the YWCA’s main campus felt downright wintry on the Friday night the cards were written.

The event was co-hosted by a handful of groups that work with incarcerated individuals and people returning from prison or jail, including Just Communities Arizona, The START Project, Death Penalty Alternatives for Arizona, Southern Arizona Legal Aid and the YWCA of Southern Arizona.

The next day, over at Tucson Mall, the Tucson Second Chance Community Bail Fund set up shop in the Southern Arizona Arts and Cultural Alliance’s Catalyst Arts and Maker Space, inviting community members to brave the rain for some gingerbread house-making, crafts and holiday -themed drinks. The fund is a donation-driven group that works to pay the bail for or help secure lower bail amounts for people in the Pima County jail.

The pair of holiday parties helped raise awareness of Arizona’s high rate of incarceration and the groups’ causes, while providing those who attended a way to give back, either through holiday cards, donations or simply learning more about how to help.

‘It’s about being human’

Attendees at the card-writing party fueled up from a spread of tamales, hot cocoa, coffee, baked goods, kettle corn and more before sitting down to write — or, in the case of younger participants, to draw pictures.

Prior to the pandemic, the party was an annual event for Just Communities Arizona, an abolitionist group formerly known as American Friends Service Committee Arizona. Just Communities seeks to end the current punishment system and what it calls its emphasis on criminalization, surveillance and mass incarceration.

Claire Tate, vice president of The START Project, writes messages of hope and encouragement to people in Arizona prisons at YWCA of Southern Arizona on Friday.


Just Communities’ executive director Caroline Isaacs was happy to see the event return and encouraged by the strong turnout, with many familiar faces in the crowd. Many attendees had stacks of completed cards in front of them but went back for more during the two-hour event.

Rebecca and her husband Hector were one such pair, writing card after card while also chatting with the woman and child sitting at their table.

Rebecca said she’d been to a similar card-writing party several years ago, but this one felt more meaningful because of the people receiving the cards.

“My husband was incarcerated, so I’m doing this for what he’s been through and passing hope along to other people,” she said.

Hector called the event a full-circle moment. He said he remembers what it’s like to be inside and not hear his name called during the daily mail call.

“It’s especially hard this time of year,” Hector said. “It’s about being human, because in the end, no one’s perfect.”

In Pima County, the jail population has increased by about 45% since the onset of COVID-19, says a recent letter to the Pima County Board of Supervisors from Sheriff Chris Nanos. Nanos said the jail is running at 92% capacity, with inmates sleeping on cots on the floor due to lack of space.

Claire Tate, vice president of co-hosting nonprofit The START Project, brought her children to the party, with her daughter drawing colorful pictures for card recipients.

“Email is nice, but it’s so important for incarcerated people to get physical mail,” Tate said, adding that personal letters and cards have more of a personal touch.

Through community involvement and outreach, the group works to ensure a better corrections experience for incarcerated people and their families.

Just Communities’ Isaacs said the groups ordered 2,300 cards, twice as many as previous years, with the addition of partner organizations’ inmate lists. While not every card was completed, the groups are working to finish the handful that remains.

The survey was available in English and Spanish and received more than 1,200 responses across all six Tucson wards between December 2021 and Aug. 15.

Preliminary results are available on the group’s website. Housing, affordable and accessible mental health services, and better-resourced schools are the three most requested resources. Respondents indicated the need to have city budgets better reflect steps that create day-to-day safety, according to Just Communities.

The group is drafting a report from the survey results it expects to release in the spring, but select data is already up on Just Communities’ website.

The survey addressed issues including policing and incarceration, neighborhoods, housing and more. Forty-four percent of respondents said the city should prioritize community-based alternatives to arrest and detention, and 39% wanted more accessible mental health and substance use services.

Isaacs has said the goal of the survey was to learn what safety looks and feels like to community members who have been historically overlooked.

“We have to start asking different questions of different people instead of doing the asking and answering,” she said. “When you ask communities ‘what does safety look like’, you have to get really hyperlocal.”

Vicky Campo looks at the work of Candace Gastelum Fernandez and Fransisco Javier Gamez-Aguliar during a holiday card-writing party at YWCA of Southern Arizona on Friday.

The Tucson Second Chance Community Bail Fund, in addition to helping people lower their bail or paying their bail in some cases, also hosts an annual holiday commissary fundraiser.

The goal this year is to put $25 on the books of 150 inmates at the Pima County jail before the holidays, with donations still being accepted.

“It’s really a reflection of the fact that we know that we can’t help the vast majority of people at the Pima County jail,” Rainey said. “This is our way of giving back. They can get something from commissary that’s better food, they can email their family or they can call someone.”

Rainey said poverty is a huge barrier, preventing many defendants from being able to pay bail, hire private attorneys or even purchase phone time or items from the jail commissary. Rainey pointed to a recent article in The Atlantic that said the average family doesn’t have $400 to cover an emergency.

“(Pima County) is one of the poorest counties in the country, not just Arizona,” Rainey said.

In 2021, 14.9% of Pima County residents were living in poverty, according to the US Census Bureau.

The bail fund is part of a national nonprofit bail fund network. His work is funded largely through donations.

“We know that we don’t have infinite oodles of money, so a big piece of the advocacy when we’re working with families is fighting the system to get the bonds reduced,” Rainey said, adding that the average bail amount the group pays is $5,000.

The bail fund is seeing an influx of retail theft cases from big-box stores with robust security systems and off-duty police officers on staff, according to Rainey, who said these cases tie up the system and can have major repercussions on a defendant’s life .

“And if you’re not facing jail time, you’re representing yourself,” Rainey said.

Pima County, like much of the country, is facing a public defender shortage. In misdemeanor cases, a person isn’t eligible for public representation unless the County Attorney’s Office indicates it will be seeking a sentence involving jail time, said Pima County Public Defender Megan Page.

Rainey said people often will take plea deals on a crime they didn’t commit just to get out of jail.

“The system is very backed up from COVID. It’s catching up for sure, but it’s very much backlogged,” Rainey said. “Can you afford to sit in jail for two years and wait? Most people can’t.”

For some people, even prison is a better alternative than jail because of the ability to work.

“In jail, there aren’t jobs. You’re truly just sitting around and you’re fully dependent on your family to supplement you,” Rainey said. “And everything costs money there, including going to the doctor.”

“People tend to think that people committing crimes is a separate bucket from ‘Tucson is having a housing crisis’ or ‘inflation or food is really expensive’. These things are all interconnected,” Rainey said. “We are advocating for giving people what they need. We know we have an affordable housing crisis in this community and that’s very much related to what’s happening at big-box stores and with bail.”

Continued community education on the issues and interconnectedness of social problems is important to the goals of reforming the system or advancing change, Rainey said.

“It’s not sexy, it’s not the actionable thing, but if we ever have a chance of winning, it’s going to take a lot more community education.”

Everything You Should Know About Visiting Arizona

Yuma County will recount all ballots cast in 2022 general election