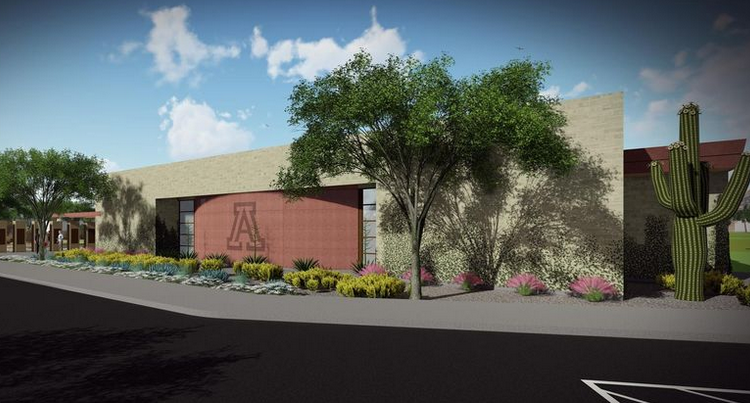 Tucson Historic Sports Venues and Artifacts: The Hunt for our First Golf Course

University of Arizona artist rendering of the new Clements Golf Center at the Tucson Country Club.

NOTE: The 19th in a series of tracking down lost or forgotten sports venues, trophies and artifacts in the Old Pueblo.

Some say the Tucson Country Club had the first golf course in the Old Pueblo and they would be partially right because they often claim “1914” as the year the course opened. Well, try 1905 and then thank you Mayor CP Skinner of Moline, Illinois.

A winter visitor, Skinner made true on the Articles of Incorporation filed by the Tucson Country Club in 1904 to provide for “golf links” and “tennis courts.” He volunteered his services in January of 1905 and it was ready by March of that year. The dirt course was often in need of repair and it went in and out of use for several years and was worked on in 1908 and again in 1909: Complaints about the course started coming in again in 1911: By 1914, Tucson started to look into hosting golf tournaments and three places of interest were discussed: The land between the railroad and the Santa Cruz River, the University of Arizona farm (still there) and the Country Club. The site by the Santa Cruz River was turned down due to “adobe soil” or what we call caliche. No word on why the UA farm was turned down but the Country Club had to fence its course to prevent “wagon wheels” from ruining the course and putting “greens” had to be oiled sand (skinned). 1915 was the year when golf was here to stay: The El Rio Country Club was the first grass course in Tucson (1929). Bisbee and Douglas did have golf courses long before Tucson but there was talk about the University of Arizona having one, or discussing one, in 1902. Research on this comes to a dead end. If true, students played golf on the campus before anyone else in the Old Pueblo: Arizona is building the Clements Golf Center at the Tucson Country Club for home matches. More on the history of the various Wildcat Courses can be found HERE.