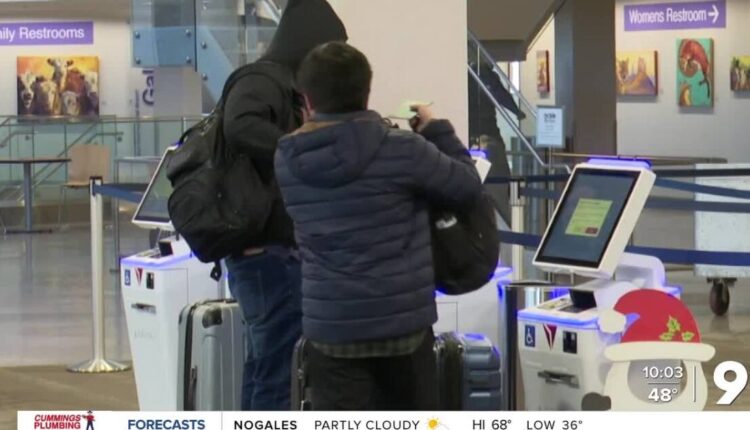 TUCSON, Ariz. (KGUN) — Tom Stewart and his family were heading to Rochester, Minnesota from the Tucson International Airport when their flight got delayed about 3 hours.

While he wasn’t all that thrilled, he wasn’t exactly disappointed with the idea of ​​having to stay in sunny Tucson instead of Minnesota.

“It’s kind of mixed in a way. We wouldn’t mind it being totally delayed because then we could’ve stayed here. The weather is awesome here.

He said he was hoping if he had to stay overnight that the airline would accommodate a hotel and maybe some extra snacks.

However, getting home was more important to him.

“Hopefully, knock on wood, looking forward to getting home,” he said.

At least 2 flights leaving the Tucson International Airport were delayed and at least 10 flights arriving were delayed. There were also at least two arrivals cancelled.

Officials with the Tucson International Airport said they’re expecting about 210 thousand people to be traveling this week and next week. They said that’s about a 25 percent increase from last year to this year.

As for how many people are expected to arrive at Tucson, airport officials said over 100 thousand.

John Hohn was about to leave McAllen, Texas when his flight got delayed about an hour.

Hohn was only traveling for a day and was returning back on Friday, hoping to make it home before Christmas Eve.

Maria Navarro was in the opposite situation, waiting for her daughter and husband to get to Tucson from Denver.

However, they were delayed after coming from Germany to Denver and she was forced to find something to do to fill in the time.

“Now I have to find some place to hang out for 5 hours,” she said.