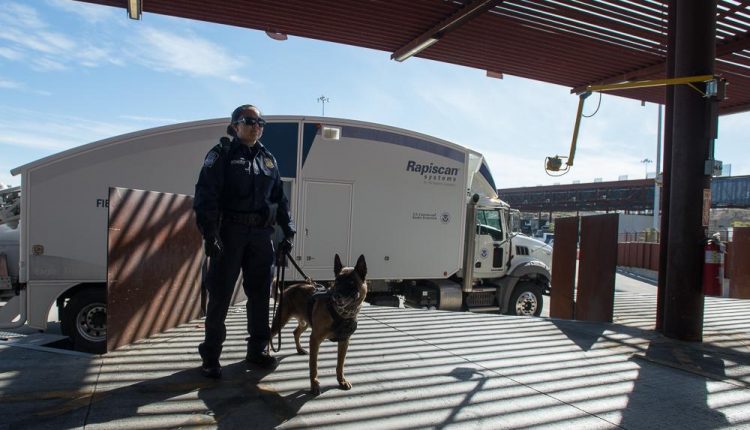 A Las Vegas man was found guilty Monday of weapons smuggling and threatening federal officers after a trial over a 2019 armed standoff at a Lukeville, Ariz. border crossing.

John Milton Lee, 62, was found guilty by a jury in Tucson’s federal courthouse following a trial last week in front of US District Judge James A. Soto.

Lee faces sentencing on Aug. 3, 2022, on his convictions for impeding and threatening federal officers, and smuggling firearms and ammunition into Mexico.

On Nov. 1, 2019, Lee drove his 1984 Chevrolet Suburban into Mexico through the Lukeville Port of Entry, about 110 miles southwest of Tucson. But he quickly returned to the US after Mexican border officials balked at the dirt bike he was carrying in a rack attached to the SUV and refused to allow him to continue into that country, according to court records.

When Lee crossed back, he told officials with Customs and Border Protection he was a priest, but refused to give them identification, so he was sent to the secondary inspection area. There he refused to get out of his vehicle, nor would he allow CBP officers to inspect the Suburban.

According to court records, Lee said that he did not believe that government=issued documents were “a valid form of identity.” Lee also told CBP officers they couldn’t touch him, or anything in his vehicle. He later reached into his jacket and threatened the officers, telling him “he didn’t want it to go there.”

“Although Lee never pulled out a gun, officers could see the handle of the firearm in his jacket,” wrote Esther Winne, a Justice Department spokeswoman. Over the next hour, Lee engaged in a standoff with five CBP officers at the Lukeville border crossing. Eventually, the officers convinced Lee to get out of the vehicle, but he still refused to surrender, continuing the standoff until a CBP officer tased him. According to the complaint filed in 2019, Lee “fell to the ground, and his firearm fell to the side.”

Officers removed the gun Lee had in his jacket, and found it was loaded with “one round in the chamber, the safety off, and the hammer cocked,” Winne said.

Officers also found he was carrying three loaded 30-round rifle magazines. They searched his vehicle and found an AR-15-style rifle within his reach during the standoff. They also found three more rifles, including an HK91, an Israeli-produced semi-automatic rifle known as a Tavor, as well as a Ruger .22-caliber carbine, and three more handguns.

All the firearms were loaded, and each had a round in the chamber, Winne said.

All told, Lee transported 8 firearms into Mexico, as well as 1,962 rounds in a mishmash of various calibers, and 17 loaded magazines.

After officials found the weapons, Lee was read his rights by special agents with Homeland Security Investigations, a part of US Immigration and Customs Enforcement. Lee told investigators at the time he wanted to travel to Guatemala to help the people there with “the injustices they face,” according to court records.

HSI’s office in Sells conducted the investigation in this case, with help from CBP. Assistant US Attorneys Angela Martinez and Serra M. Tsethlikai, District of Arizona, Tucson, handled the prosecution.