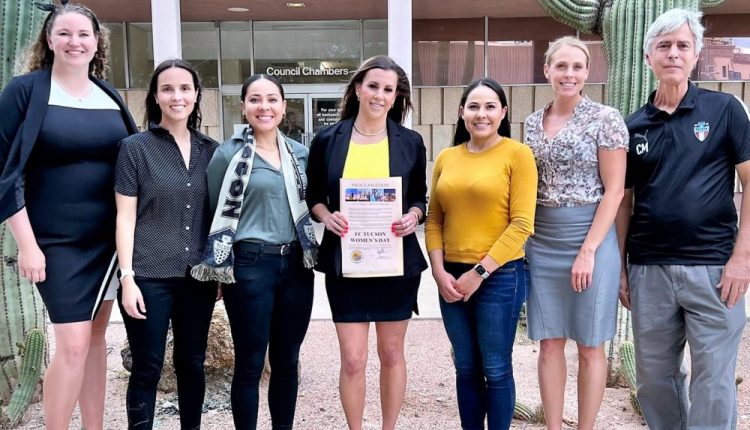 Head coach Kelly Pierce holding the Proclamation along with members of her staff and players. (Andy Morales/AllSportsTucson)

The list of Women’s Premier Soccer League (WPSL) recognitions for FC Tucson Women continues to grow with former Mountain View and University of Arizona standout Laura Pimienta earning her third straight All-Conference node as a defender. One of the original athletes in the program dating back to 2013, Pimienta was joined by Kourtney Kutscher on the All-Desert Conference Team as a midfielder and Ashly Martinez as a forward.

Head coach Kelly Pierce was recognized by the Tucson City Council on Tuesday and Mayor Regina Romero proclaimed August 23 FC Tucson Women’s Day. Several members of the team were on hand including family and community members. As a player, Pierce became the first and only member in program history to be named All-WPSL in 2014.

Today, I proclaimed August 23rd @fctucsonwomen’s Day! The talented squad of #FCTucsonWomen consistently go on to professional careers and are an inspiration for #Tucson youth. ⚽️🌵 pic.twitter.com/U5nHZ2m5rU

Former Mountain View and @ArizonaSoccer standout Laura Pimienta was once again named to the @WPSL Desert Conference Team as a defender for @fctucsonwomen @coach_kel14 @amandapowers82 pic.twitter.com/h6yMRwTJf2

Named one of “Arizona’s Heart & Sol” by KOLD and Casino del Sol, Andy Morales was recognized by the AIA as the top high school reporter in 2014, he was awarded the Ray McNally Award in 2017 and a 2019 AZ Education News recognition. He was a youth, high school and college coach for over 30 years. He was the first in Arizona to write about high school beach volleyball and high school girls wrestling and his unique perspective can only be found here and on AZPreps365.com. Andy is a Southern Arizona voting member of the Ed Doherty Award, recognizing the top football player in Arizona, and he was named a Local Hero by the Tucson Weekly for 2016. Andy was named an Honorary Flowing Wells Caballero in 2019, became a member of the Sunnyside Los Mezquites Cross Country Hall of Fame in 2021 and he was a member of the Amphi COVID-19 Blue Ribbon Committee. He earned a Distinguished Service Award from Amphitheater and he was recognized by the Sunnyside School District and by Tucson City Councilman Richard Fimbres. Contact Andy Morales at [email protected]