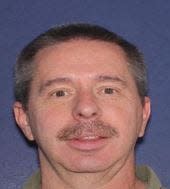 A middle school music teacher in Tucson was charged with making a terrorist threat after state investigators said he sent an email targeting Arizona state Sen. Wendy Rogers and a Trump merchandise store in Show Low.

The Arizona Department of Public Safety arrested 58-year-old Donald Glenn Brown, who teaches orchestra at Pistor Middle School in Tucson, on Sept. 7 following an investigation of the incident.

Though Brown lives in Tucson, authorities believe the email was sent from his mother’s residence in Pinedale, about 15 miles from the eastern Arizona town of Show Low.

Brown emailed the threat to the Trumped Store in Show Low on July 4 from a fake account with the subject line “Wendy Rogers is going to (expletive) die,” according to a DPS report. Rogers was in Show Low for the Independence Day parade.

The expletive-laden email, which appeared to come from a “Jessica James,” stated that “Jim and Jessica” were parked at at a fast-food store located next to the Trumped Store with “a pair of AR-15s.”

“We are going to walk in your … joke of a store, and start shooting,” the email said. The writer threatened to shoot Rogers — who is called a “traitor” — in the head before shooting up the store.

“Some real patriots are going to hit back and … Rogers is going to die,” the email continued. “(Expletive) your Traitor… tRump.”

Brown could not be reached for comment. The Tucson Unified School District didn’t immediately return a call about Brown’s employment status. A receptionist at Pistor Middle School said he wasn’t at work Thursday.

The small northern Arizona town’s parade, which featured elected officials including Rogers, R-Flagstaff, and state Attorney General Mark Brnovich, had just ended when the email was sent around 11 am

Rogers, a Trump-supporting Republican who has gained national prominence for promoting election conspiracies and harsh online rhetoric, had posted a photo of herself and supporters at the Trumped Store on her Twitter account at 9:40 am before walking in the parade.

The store’s co-owner, Steve Slaton, said Rogers came back to the store at about 11:30 am along with another parade participant, Eli Crane, the Republican nominee running against Democrat Tom O’Halleran in Arizona’s Congressional District 2. Crane’s family members and several campaign workers also were in the store. By the time Slaton checked his email at about 1 pm, Crane and his family had left but Rogers was still inside. 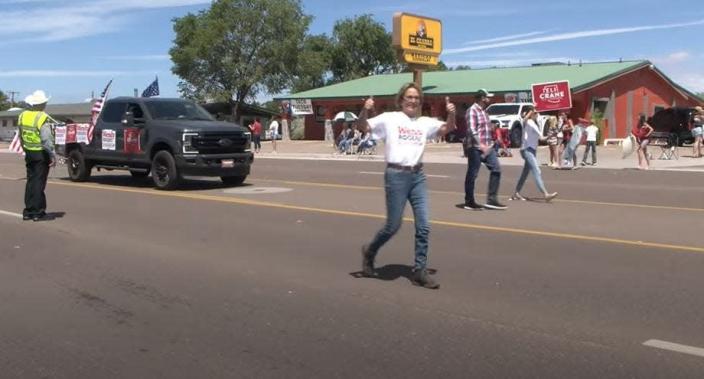 Slaton and a Rogers’ campaign worker hustled Rogers out of the store and notified police, Slaton wrote in an email to The Arizona Republic. Rogers worked with Show Low police “the rest of the day and night” as they changed locations, Slaton wrote.

“Needless to say we had a lot of high-value targets here at the store that day,” Slaton said in the email. “We’ve had threats over the years, but this one was more chilling than those in the past. We took it very seriously.”

While in custody after his arrest, Brown told DPS officers he had created the email account and sent the threat, records state.

“Brown stated he sent the email out of frustration and was apologetic,” according to DPS records.

Pima County Attorney Laura Conover’s office sent a letter to Slaton last month informing him that prosecutors have “tentatively” decided to decline prosecution of Brown based on the evidence. Navajo County Attorney Brad Carlyon then took the case and sought the indictment. Both Conover and Carlyon are Democrats.

Carlyon declined to discuss specifics of the case but released a copy of the case report to The Republic.

A Navajo County grand jury indicted Brown on Oct. 4 on a charge of making a terrorist threat, a Class 3 felony. He faces a potential of 3.5 years of prison.

Brown was released after his arrest and has a court date for his initial appearance at Navajo County Superior Court in Holbrook at 9 am on Oct. 31

Rogers, with her far-right politics and Trump endorsement, has an intensely loyal following nationwide and has raised millions in campaign funds. Yet she’s also caused division in the Republican Party.

She was censored by her Republican peers in March for “conduct unbecoming of a senator” for inflammatory posts, including one in which she called for the public hanging of political enemies. The state Senate investigated her for a bizarre post referencing “fed boy summer” — interpreted by some media outlets as the promotion of an anti-FBI conspiracy theory — following the massacre of 13 Black people at a grocery store by a racist gunman in Buffalo.

Rogers beat fellow election denier Kelly Townsend in the August primary election and appears headed to reelection in her heavily Republican district, which stretches from Flagstaff to Apache Junction, against Democrat Kyle Nitschke.

Other AZ officials targeted by threats

Three other men, all from other states, were arrested in recent weeks by federal authorities on suspicion of sending threats to Arizona officials.

A Massachusetts man was arrested in July for sending a bomb threat directed at secretary of state and gubernatorial candidate Katie Hobbs, a Democrat. A Missouri man was indicated in August for leaving a threatening voicemail for Republican Maricopa County Recorder Stephen Richer. And this month, an Iowa man was arrested in connection with an email threatening to “lynch” Maricopa County Supervisor Clint Hickman.

The US Department of Justice’s Election Threats Task Force are handling those cases.