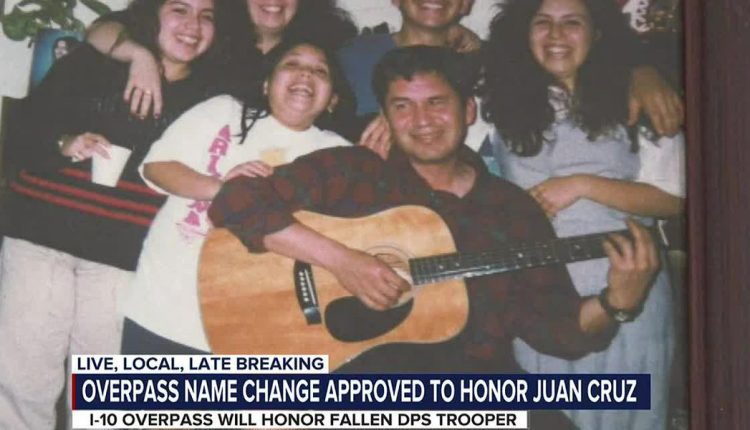 TUCSON, Ariz. (KOLD News 13) – A fallen hero honored. After years of trying to get the I-10 and Ruthfauff overpass named after Officer Juan Cruz, family and friends are rejoicing.

The last three years friends, family, and thousands of supporters have been petitioning to honor Officer Cruz by renaming the overpass after him.

It’s been 24 years since Officer Cruz paid the ultimate sacrifice and it’s been tough for family and friends to even drive past the area, but now when they drive passed this overpass, they’ll soon see a sign that honors him.

A father, true friend, police officer, and a musician are just a few of the things Officer Juan Cruz was known for.

His daughter, Marissa Cruz-Long played some of his music Tuesday as she was celebrating that the overpassed will be renamed to honor her father.

“To see my dad’s name be put up there and know that this was done with love and honor toward him, is going to be so fitting,” said Marissa Cruz-Long.

The stretch of road where the accident happened has always been difficult for her and other family members to drive through, but now, after all these years, she’ll have something to look forward to.

“I dread driving that stretch right there and now we have something happy to look at. It’s something that is celebrated rather than just mourning all the time,” she said.

Family friend, Jim Sayre was the applicant who’s been working for all these years to get the overpass renamed.

“He was a family man. Someone that really instilled really good, core values ​​in his family. if you were around him, you would find the most important thing to him were the people who were around him. That’s why he translated into an amazing police officer,” Sayre said about Officer Cruz.

Sayre acquired more than 7,000 signatures on a petition for the name change and 25 state lawmakers wrote letters of support. Tuesday, all of the work paid off and the renaming was approved at an Arizona State Board on Geographic and Historic Names meeting.

“As I told the board, on that night and on every shift, he was here just to help the people of Arizona and I hope that, by naming this and having a physical sign with his name on it, allows more people to understand and recognize that,” he explained.

They plan to have the sign up before the anniversary of Officer Cruz’s death on December ninth. The family is hoping to have a ceremony to celebrate and honor him.