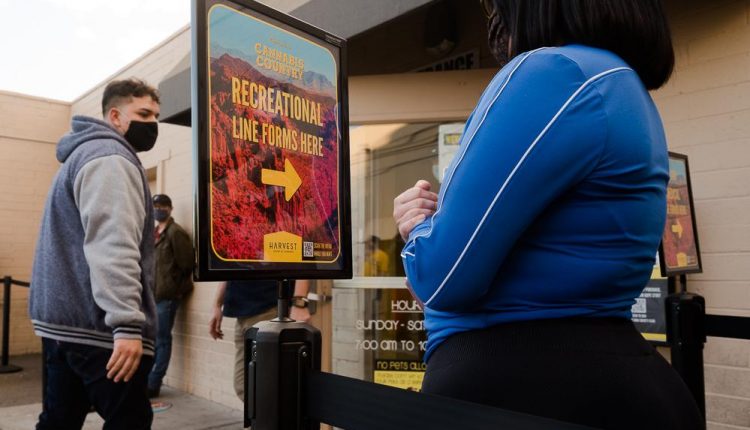 The city of Tucson and Pima County have launched public outreach campaigns as they prepare changes in zoning codes to allow the opening of dispensaries that sell only recreational marijuana.

There are currently no stores offering just recreational cannabis products in the area; all local dispensaries are operating under dual-use permits, meaning they sell both medical and recreational pot.

The county and city are looking to ease the zoning restrictions that have kept such dispensaries from opening, as state officials have awarded four “social equity” licenses to local businesses.

Local planning officials are saying “it’s time to catch up” with marijuana laws after the state rewarded more adult-use licenses through their social equity program. Also known as recreational dispensaries, adult-use dispensaries sell marijuana that is regulated and taxed differently from medical marijuana, which requires a doctor’s recommendation to buy.

Prop. 207, the voter initiative that led to the legalization of adult-use pot in Arizona, called for the creation of 26 adult-use licenses intended to help groups harmed by the enforcement of marijuana bans, such as low-income communities and people of color. The Arizona Department of Health Services awarded those licenses on April 8 in a lottery-style drawing.

The four Pima County businesses that were awarded state licenses are located in areas that are zoned residential, which means no commercial establishment can open there. It’s likely that those four winners will transfer their licenses to locations in a commercial areas, a county planning official said.

But while Tucson has just more than a dozen dispensaries that sell both medical and recreational marijuana, stand-alone adult-use stores are not allowed under current zoning regulations. That has city officials looking to make changes.

Pima County allows adult-use dispensaries, but the permitting process is so “stringent,” a planning official said that shops have been unable to operate outside of city limits.

The names and addresses of the four businesses that won the social equity licenses are:

Juicy Joint LLC has an address outside of the city limits of Tucson in unincorporated Pima County. The rest are inside Tucson with the exception of Higher than High in Ajo.

No dispensaries — either medical or adult-use — exist in unincorporated Pima County, and in Tucson, all the dispensaries are dual-use, meaning they sell both medical and recreational pot. All of the local establishments that originally opened with medical-only licenses and are still operating have also obtained dual-use licenses.

A dispensary did open near Ajo but moved to Phoenix after closing up shop in Southern Arizona. It was the only licensed marijuana establishment to operate in unincorporated Pima County.

That’s about to change though, said Chris Poirier, a planning official with Pima County. The county could have changed their zoning in 2021, after the passage of Prop. 207, Poirier said, but “there wasn’t any demand” to allow adult-use dispensaries.

“We knew that could have been a time to take a fresh look at our code then, but the way they issued those (adult-use) permits we weren’t in any sort of hurry,” Poirier said. “There wasn’t any demand until now. Generally, we’re feeling more pressure because there are social equity licenses out there that could potentially benefit from landing in unincorporated Pima County. So now there is a bit of demand.”

Committing to a theme, the county started a public input process on April 20 — or 4/20, a celebrated day in pot culture — by publishing the proposed changes to country zoning codes on their social media channels along with a meme that featured an elated Jeff Spicoli, the long-haired stoner from the 1982 film “Fast Times at Ridgemont High” played by Sean Penn.

A draft ordinance laid out the proposed changes, which included amendments that would allow adult-use dispensaries to grow marijuana in rural areas and sell it in general business zones. The County Planning and Zoning Commission has to approve the amendments before the draft goes to the Board of Supervisors, who have the final say.

The Planning and Zoning Commission expects to decide on the zoning changes in May, and the supervisors should decide on it shortly after, Poirier said. The county is also trying to align their zoning codes with the city of Tucson, according to county documents, as the city is undergoing a similar public input process but with a different timeline.

‘The only tool we have is our zoning codes’

About a week before the state awarded the social equity licenses, the Tucson City Council directed staff to begin an outreach campaign to inform the public about their proposed special exception process for those social equity dispensaries and then amend the city’s zoning code.

The special exception process would allow these social equity licenses to become the first adult-use-only dispensaries inside the city. At their March 22 meeting, City Council members talked about making the exceptions a way of vetting the establishments to make sure social equity winners aren’t selling their licenses off to the highest bidder.

“The only tool that we have is our zoning codes,” Midtown Councilman Steve Kozachik said. “We can’t usurp state law and say we’re going to adopt our own licensing processes locally. We can attach conditions that are unique to each new application.”

The city’s public outreach process will last longer than the county’s. Dan Bursuck, a principal planner for the city, said zoning amendments generally take six months but can take longer depending on the amount of interest in the changes.

The city will start by consulting an “extensive stakeholder list” that includes existing dispensaries in town. The city’s Planning Commission will then look at the proposed changes and have their own public input period at their meeting. The City Council will then have final say.

The dispensaries with the social equity licenses won’t be able to open their doors until after the Council approves the exception process. The license winners in Tucson also have to wait for that approval before they can transfer the address for their license to their storefront addresses, which is likely why their addresses are listed in residential zones for now, planners said.

What this special exception process includes depends on the outreach process with stakeholders, Bursuck said. At the March 22 meeting, Mayor Regina Romero said they should consider “a similar process that we use for liquor licenses when they come to us that allows the public to give input and feedback.”

Eastside Councilman Paul Cunningham echoed that by suggesting the Council have a chance to consider each social equity dispensary at their meetings, where the public can also speak on the item, then vote to approve their establishments.

“The ultimate shape of the code amendment is going to be dependent on that public outreach process,” Bursuck said. “We have a pretty extensive list of stakeholders and those people will help us develop that.”

Notice requirements also exist once the amendments get to the Planning Commission. The city will post an ad in the local newspaper, mail out a notice about the public hearing times to all the neighborhood associations in the city and post information about the hearings in the Planning and Development Services newsletter.

‘The timing is right’

“If you look at (the county’s) proposed regulations, they’re very similar to what we’ve done in the past except for that social equity piece, which we’re both addressing right now,” Bursuck said. “We had already addressed dual-use and prop. 207 except for the social equity licenses back in April (2021). There could be other changes to other parts of that code that may come out through the public process, but the reason we’re back doing this right now is because of the social equity licenses.”

Both Poirier and Bursuck said that Pima County has restrictive zoning rules that have led to just the single dispensary opening in unincorporated areas for a short time. The city, however, is focused on allowing these social equity licenses while the county is looking at opening up to all adult-use marijuana dispensaries.

The county’s focus in their outreach effort, Poirier said, “is whether or not a dispensary is appropriate land use, yes or no.”

“When we first wrote our rules, this was voted before voters even to allow medical marijuana,” he said. “This was when it was very much still sort of new, and our law enforcement community was very concerned. They didn’t know what to expect, so we came up with arguably very restrictive zoning rules.”

“Now we see how they handle licensing, and there’s a tone of security embedded,” he said. “We’re not seeing the things we were most concerned about — the secondary negative impacts of (pot) use. We thought there could be spikes in crime, they could be targeted, people would be getting mugged, or it would attract a bad element, and that’s not happening. We could’ve been wrong, and we’re willing to take a fresh look at our code.”

With the social equity licenses awarded, Poirier said, “the timing is right” to reconsider letting dispensaries set up shop.

Under the county’s proposed amendments, dispensaries would be able to get permits to operate by right, which Poirier said means that if they meet the code, they’re good to go — with no public hearing required.