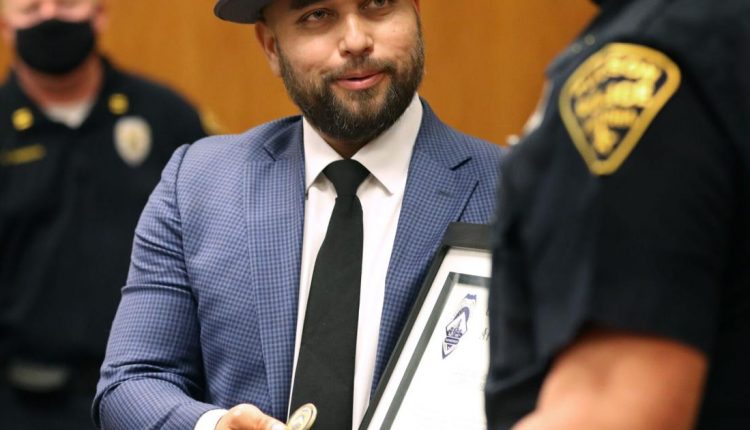 Fernando Ledesma receives a Law Enforcement Coin from Deputy Chief Kevin Hall and is honored with her Everyday Hero Recognition by the Tucson Police Department. In June, Ledesma braved traffic on I-10 to rescue a toddler who was thrown on the highway.


The Tucson Police Department presented an Everyday Hero Award to a man who rescued a child who was thrown into the Interstate 10 lanes on June 4th.

Fernando Ledezma was traveling east with his wife and children on I-10 near the Speedway and Congress exits when he noticed a collision in front of him. He saw that one of the drivers involved was okay.

As he drove on, he saw the other car on the side. He said he saw a woman with a toddler in her hands and then threw the child into the highway lanes.

Ledezma stopped his car on the side of the road and ran over the traffic to save the child. Ledezma could call for help.

The child was safe and secure after the incident, said Detective Beau Wilson of the Tucson Police Department.

“His heroism saved a life that day,” said Wilson. “If he wasn’t there, I’m confident that we would investigate a completely different incident.”

With young children of their own, Ledezma said his fatherly instincts were activated when he saw the child being thrown.

“It was an adrenaline rush,” said Ledezma. “I dodged cars and there were a few close calls, but my mission was to reach the kid to prevent tragedy.”