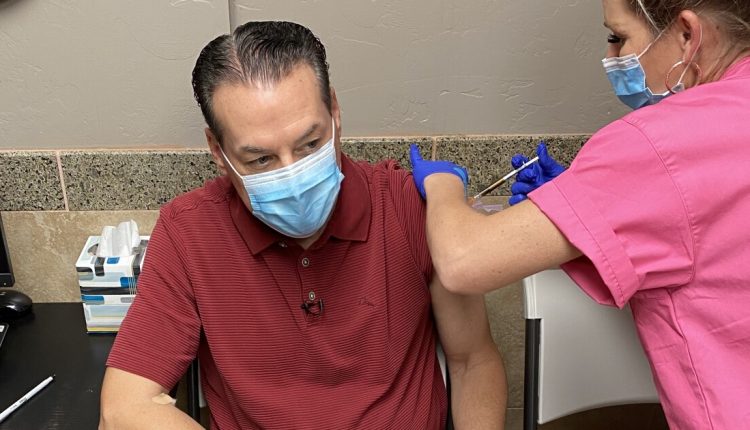 TUCSON, Ariz. (KGUN) — When the pandemic began there was a rush to produce vaccines to fight COVID-19.

KGUN 9 news anchor Pat Parris was a volunteer for the Moderna vaccine trial here in Tucson.

Two years later, that trial is coming to an end.

“I think we’d have to call it a huge success,” said Dr. Jack McGettigan, who led the Tucson portion of the Moderna trial.

In the double-blind trial, half of the 30,000 participants received the vaccine, the other half a placebo. As it turned out, Pat was one of the participants who did receive the vaccine.

Pat’s involvement in the trial began with a first dose on Aug. 4, 2020. His second dose came on Sept. 1, 2020, at Quality of Life Medical and Research Center near TMC.

Nearly 1,000 of the participants in Moderna’s national trial were right here in Tucson.

“We were fortunate, we were the top enrolling site in the United States,” McGettigan said. “Thanks again to Tucson and the huge outpouring of help.”

Two years after the start of the trial, McGettigan tells KGUN 9 the Moderna vaccine did its job well.

As the trial ends, Pat has never gotten COVID-19. He is not alone.

dr McGettigan says nobody in the Tucson portion of the Moderna trial ended up with a serious case of COVID, and no one ended up in the hospital.

“Which is what we were hoping for,” said McGettigan. “Obviously we’d love for people not to have gotten it at all, but when they did get it, in the people I saw, their symptoms were so minimal relatively speaking. We were all very grateful that that’s how it turned out.”

Some have criticized the vaccines for not preventing more cases of COVID. McGettigan says the vaccine does what the trial set out to prove.

“The fact that so many people were not hospitalized, were not on ventilators, didn’t die, that’s a success.”

Phoenix to take on El Paso Locomotive on the road