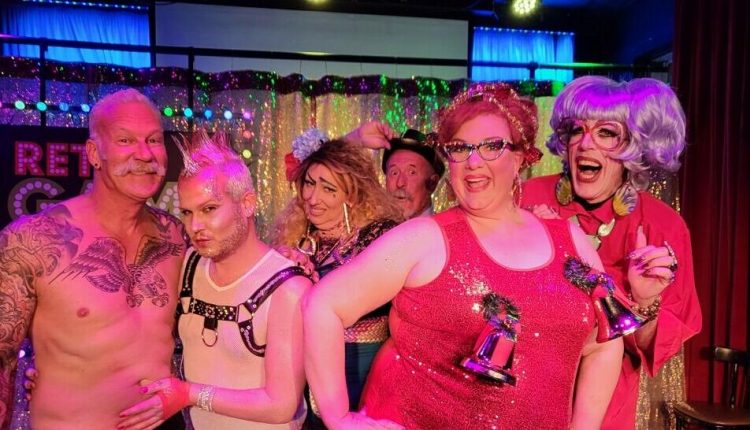 It’s the kind of game show your grandparents used to watch on their Westinghouse and RCA televisions, except with more laughs, more adult themes and significantly bolder wig and costume choices.

Retro Game Show Night, an evening of off-the-cuff comedy featuring some of Tucson’s most talented drag queens and LGBTQ personalities, returns to the Club Congress stage on Saturday, May 14, after taking most of the last two years off due to the COVID-19 pandemic.

Show producer David Hoffman said the crew did manage to squeeze in a 10-year anniversary show in December, between COVID surges, on the Hotel Congress Plaza, but it “didn’t have the same intensity that the club brings.”

“In the club, you are enclosed,” Hoffman said. “The energy builds. You can hear the audience a lot better.”

Hearing the audience is key for the Retro Game Show folks, who are known for their regular interactions with people in the crowd, often tapping willing participants as contestants.

In The Mismatch Game, the chosen game for this Saturday, audience members will fill in the blanks with a more adult version of the traditional Match Game, with character participation from host Chatty Kathee; executive assistant Swish Manley; Bubba the Queer Redneck; drag royalty Fulta Burstyn; and lonely divorcee Bernaise, who Hoffman describes as “a pushy, middle-aged cougar, always on the prowl.”

Almost everything that takes place is unscripted.

“The game is our structure, but what people do with that surprises me,” Hoffman said. “This is a very talented bunch. There is no way I can write most of the stuff that happens.”

That spontaneity is not lost on the contestants.

“You leave feeling good, like you’ve made a connection,” Hoffman said. “They have the time of their lives, whether they realize it or not.”

Hoffman hopes this weekend’s Retro Game Show Night will be the official return of a semi-regular schedule; once every two months, with the exception of a follow-up to this May show in June.

Hoffman said he and his team are ready to make people laugh again.

“When something just so unexpected happens on stage, the audiences is just crying, they are laughing so hard,” he said. “When that happens, I know my job is done and I can order another drink or two for myself.”