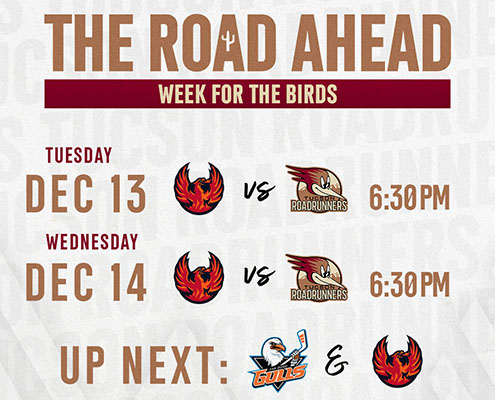 Tucson Roadrunners Road Ahead: Week For The Birds

Who’s On The Schedule

The Roadrunners four-game home stand continues Tuesday night at the Tucson Arena with the first of two midweek matchups with the Coachella Valley Firebirds. Tucson has faced off with the AHL affiliate of the Seattle Kraken twice this season on their home ice after a weekend set November 11 and 12. The 10-7-4-0 Roadrunners have earned a standings point in each of their last three contests, while the Firebirds come to town with a 5-0-1-0 record in their last six outings.

The Roadrunners weekend set with the Ontario Reign was only the start of a fun-filled home stand at the Tucson Arena. The week kicks off with $2 Twos-Day Tuesday night for the series opener with Coachella Valley, featuring $2 popcorn, $2 draft beers, and select tickets at half-price at the Tucson Arena Box Office. The home stand concludes the following night with Kid’s Free Wednesday, as all kids 12 and under can receive a free ticket to the 6:30 pm game with a paying adult at the Arena Box Office. For more information and to purchase tickets, visit TucsonRoadrunners.com/Fun. 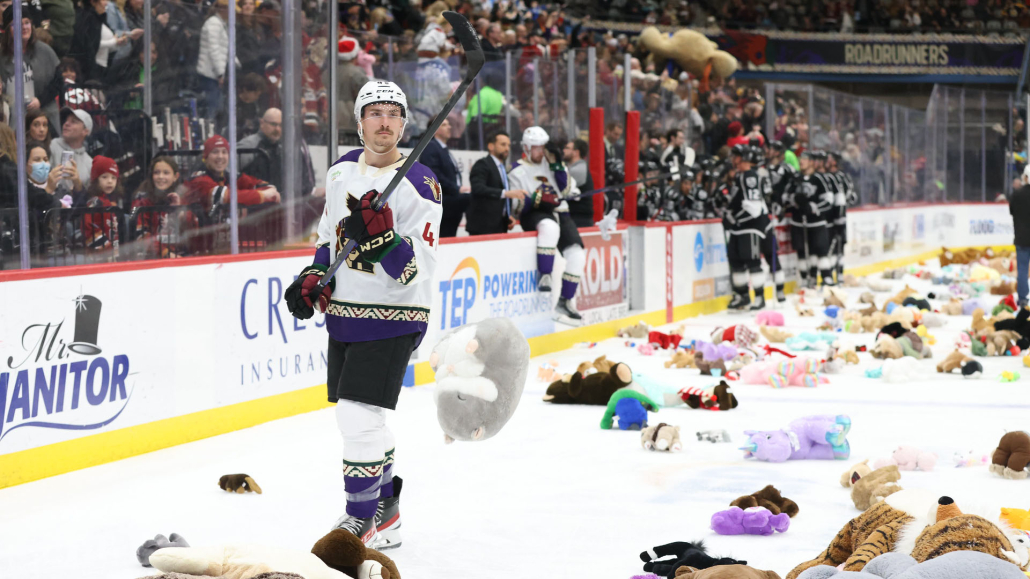 During the weekend series with the Ontario Reign, the Roadrunners hosted a Toy Drive at the Tucson Arena with fans encouraged to bring new, unwrapped toys with them to the games. Mascot Dusty will be delivering the donated toys on Monday to Banner Health’s Diamond Children’s Medical Center. In addition, the thousands of stuffed animals collected from Saturday’s Teddy Bear Toss Game will be given to Aviva Children’s Services of Tucson. 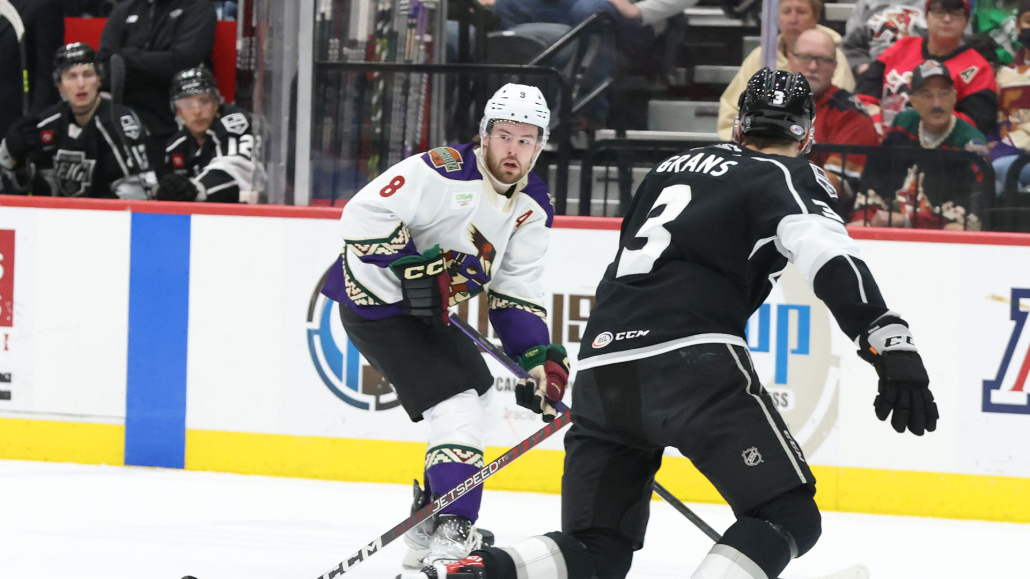 Tucson’s 2022 Teddy Bear Toss Goal was scored Saturday night by forward Travis Barron. The goal came with 6:01 gone by in the second period against the Ontario Reign and sent thousands of Teddy Bears flying onto the ice at the Tucson Arena. The goal was Barron’s fourth of the season and continued a busy night for the Roadrunner nicknamed “Bear,” as he dropped the gloves with Ontario’s Austin Wagner for his team-leading fourth fight of the year. A crowd of 5,171 was on hand at the Tucson Arena to witness the special goal, the largest attendance number at a Roadrunners home game this season. 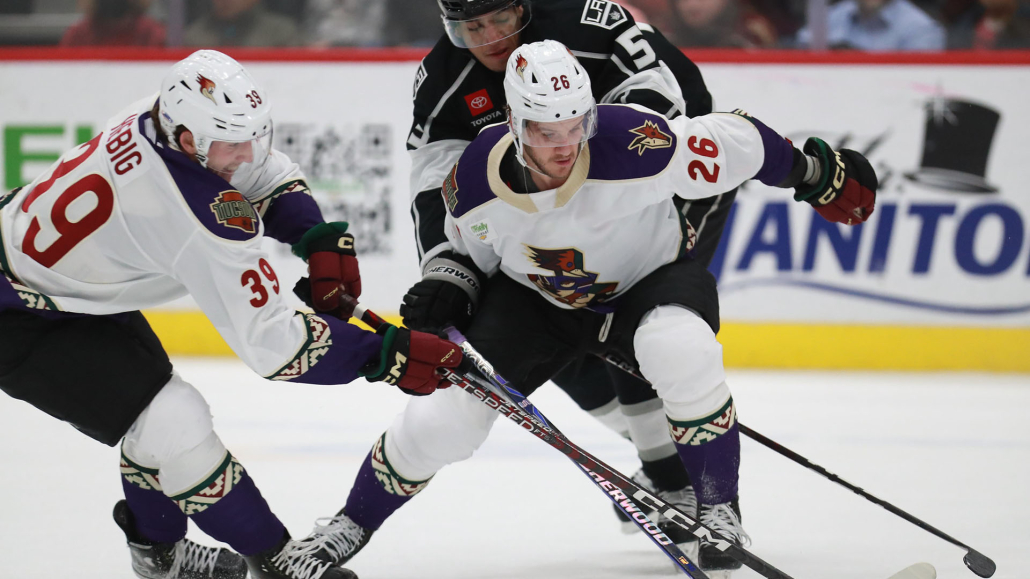 Roadrunner’s Captain Adam Cracknell is off to a strong start to December. Cracknell has eight points (4g 4a) over his last four outings and tallied three consecutive multiple-point performances for the first time in his AHL career from December 3 to December 9. His six-on-four goal in the final 1:06 in regulation on Saturday extended his active scoring streak to four games and sent the series finale with Ontario to overtime. In his first year as a Roadrunner, Cracknell is tied for third on the team with 16 points (9g 7a) in 21 games.

Carcone Keeps It Up

Tucson leading scorer Mike Carcone enters the week on a six-game point streak, tied for a season-high. The 26-year-old has tallied a point in 15 of his 20 total appearances this year and is tied for sixth in the American Hockey League for total scoring with 27 points (8g 19a). His 19 assists is already a career-high and his first-period score against the Reign on Friday, December 9 was his 100th AHL goal. The Roadrunners Alternate Captain made his National Hockey League debut last season with the Arizona Coyotes on December 28, 2021, before he appeared in 21 total games at the NHL level. 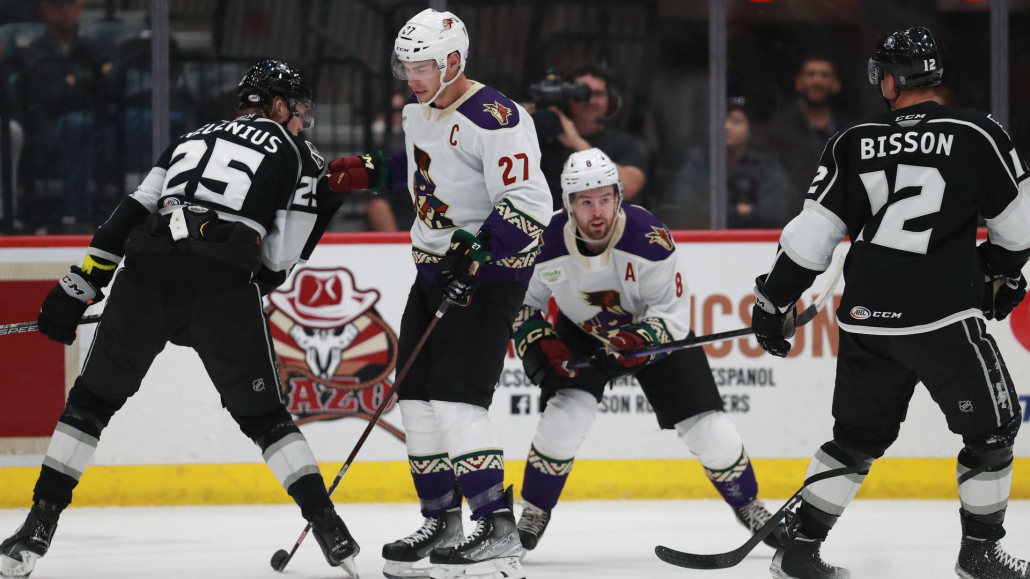 The Roadrunners have had three-straight games go past regulation for the fifth time in team history and the first time since January 2018. Tucson won three-straight overtime matchups by scores of 2-1 from January 19 to 26 of 2018: twice against the San Antonio Rampage, and once against the Chicago Wolves. Tucson had a stretch of three consecutive overtime games twice in 2017-2018 and twice in their inaugural 2016-2017 season.