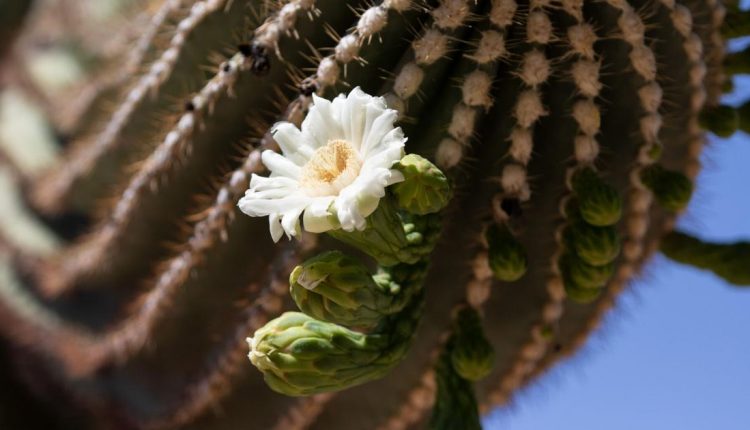 Tucson has failed to enforce a policy meant to preserve native plants like saguaros for at least the past 20 years, a shortcoming that officials said saps limited groundwater, hinders the city’s climate goals and wreaks havoc on the area’s iconic Southwestern landscape.

The 1997 law requires developers to preserve at least half of the native plants growing on the lots where they want to build. It covers 29 species and includes special protections for saguaros and ironwoods, only allowing 30% to be bladed rather than the 50% rule applied to the other plants.

It touts big environmental and economic perks, promoting native landscaping that requires little water and protecting the cactuses that draw millions of tourists to the area each year. Some of the protected plants, such as saguaros, also suck massive amounts of carbon out of the air and could be an important piece of the city’s plan to become carbon neutral by 2030.

But despite the potential benefits, Tucson has all but forgotten the ordinance even exists: staffers rarely confirm that the rules are being followed, developers are free to skirt reporting requirements and the city doesn’t inspect the sites after construction to make sure some plants were saved.

“We’ve got this ordinance in place and we’re simply not enforcing it,” said Councilman Steve Kozachik, who raised the issue at Tuesday’s council meeting along with Councilman Kevin Dahl. “If we’re going to be focused on climate (and) this whole climate action plan, and we have ordinances in place that are specifically intended to address that, then we need to walk the talk.”

The policy’s failure isn’t a recent discovery. Troy Goodwin, a University of Arizona master’s candidate, sounded the alarm in a 2001 study that showed 100% of the developments he reviewed failed to meet the policy requirements.

It’s unclear why the ordinance remained unenforced over the next 21 years, though officials said staffing issues in Tucson’s Planning and Development Services Department is the largest barrier to implementing the policy today.

The city department is one of the offices that still faces a staffing shortage after Tucson’s recent hiring efforts, which brought the city’s overall job vacancy rate down significantly over the past few months.

Officials said the department is struggling to carry out its basic functions, like issuing construction permits, so making the time to count the number of native plants on a lot hasn’t been easy.

Still, it doesn’t appear that anyone in the department raised the issue. Council members said they weren’t aware that the policy was failing and that they “assume that when an ordinance is passed that staff is going to implement it,” which proved wrong in this case.

“How do we make sure that when the mayor and council request policy and require certain things to be done in a department, how do we make sure they’re being done?” Mayor Regina Romero said. “I believe it is the responsibility of the directors of our departments to call attention when something is not working. When something is not being instituted because of lack of staff or (just) because it’s not working.”

Council members recently voted to spend about $300,000 on three new positions at the planning department — one landscape architect and two city inspectors — in an effort to better implement another policy called the Commercial Rainwater Harvesting Ordinance, which has also gone unenforced for years.

The new staffers might be tasked with enforcing the native plant ordinance as well, though officials doubt that’s enough to turn things around. Future positions might also be hard to fill because the highly-skilled roles require expertise about local plants and landscaping.

“I don’t have a number (for how many staffers are needed), but three is not going to get it done. Especially if they’re also required to enforce the rainwater harvesting ordinance,” Kozachik said. “We’ve been waiving the flag about the whole climate program, if that’s going to be our mantra we need to make sure we have staffed up appropriately.”

It’s not clear what extra steps the city might take to increase staffing levels at the planning department, but experts said the clock is ticking and the impact of blading more saguaros could be felt for centuries.

Experts said the cactuses aren’t able to reproduce for the first 60 years of their lives and their reproductive cycle isn’t consistent, meaning it’s impossible to know how many will crop up in a given season — though that number has been consistently decreasing since the 1990s.

“We had a really nice cooler, weather period during the 1980s that lasted until the early 1990s. Since then, the number of new saguaros coming into the population has really declined dramatically,” said Don Swann, a Park Service biologist at Saguaro National Park. “That’s probably because we’ve been in this extended drought since the mid-1990s. We hope that changes, but that’s the current situation.”

Saguaros also grow very slowly, requiring nearly 30 years to grow a single foot in some instances, so it can take an entire human lifetime to replace even one mature cactus that’s bladed.

The timeline raised additional concerns about the city’s policy for Kozachik and Dahl, who also spearheaded the discussion of the ordinance Tuesday.

Both officials think Tucson should reduce the number of plants that are allowed to be bladed under the current rules, but that will be an admittedly pointless change until the city is able to provide some sort of enforcement.

“The time it takes to regenerate what we’re allowed to be bladed right now, we’re talking about generations beyond when anybody sitting on this call right now will be around to enjoy it,” Kozachik said. “That’s the reason why the enforcement of the (policy) is so important. Because the enforcement of this policy will affect generations beyond us.”

Council members didn’t take any votes to adjust the policy on Tuesday, but are expected to continue discussing potential changes in the coming months.