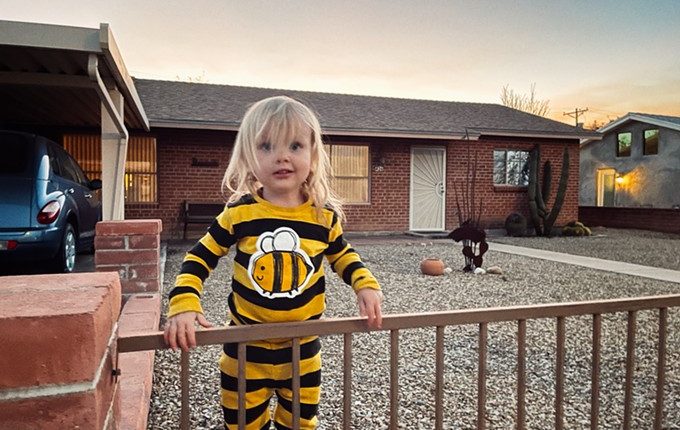 The old house on South Kenyon Drive in Tucson, where I spent the first eight years of my life. I am standing outside of it on a chilly sunset with my wife and daughters, two-year-old Rickie and 9-month old Zuzu. I am here because I can’t stop thinking of beginnings, now relative to my own children, how personal narratives coalesce like genetic codes. The melancholy swells and my patient wife listens. The old house is a foundation, a springboard of longing, of nostalgia, of euphoric and despairing recall, and therefore a teacher. How love can never be implied, or beaten into you, how silence can never be a thing.

The first memory: The smell of my mother’s cigarettes, her white bathrobe, night slippers, and the little blue spider veins webbing on her lower legs, and my three-year-old self in that kitchen attempting to articulate the sadness, those imprecise ways of seeing the world in embryonic logic, purely visceral, unformed words and twirling fingers to communicate some imperceivable frequency. How the light slanting into the kitchen from the window looking out at the carport deepened the sadness.

She was so pretty to me, the shyness I felt in her presence. I thought she would go on a TV variety show with Vickie Lawrence and then come home and make us dinner.

It is even in the steps, haunted strides over exact spots. We step round the block to the arroyo that still divides the alley behind our old house. The ever-tempting, dad-forbidden playground where my big brother slipped and dropped a boulder on my five-year-old head and split it open. The blood poured over my forehead and blinded me, drenching my shirt and pooling on the ground. We made it back to the house to my mom’s horrified expression and shriek. You can’t forget that look and sound from your mother. To me there was sweetness in it, no resistance, implying more; affection over intolerance, a love. The hospital rush, the stitches. I had thought the stitches kept the gunk inside my head from rising out and splitting two. I can caress that scar on my head now until it hurts, until it feels like a wound.

I hear my mother’s hisses directed at my father. My father disseminated them into rages, and his hands grew big, like they belonged to a beast in charge of a cave. I do something wrong and dad would snap a switch off a backyard tree, yank my pants down and give it to me hard in front of a friend or sibling. The screams and paralysis, the bruises, my desperate hands attempting to block the whips on my behind, pissing the ground in front of me, in shame.

I shudder at any ugly whispers of my future outbursts at Rickie, Zuzu and son Reece.

More beginnings. The silences. Silent, alone in the passenger seat of my Dad’s pickup truck heading out to cut dead mesquite trees for firewood with his chainsaw, somewhere toward Patagonia. The assiduousness in his tasks, and therefore mine, in lieu of laughter or storytelling, a resounding nervous silence the bond between us. It lasted decades. That silence had to connect us, had to show an unspoken, implicit love. Did he forget what it meant to be a boy? His father died before I was born and my father died before my children were born. I will never know.

He’d laugh hard at Foster Brooks and Red Skelton, I knew even then it was somehow a backside to a fierce if stoic intelligence. How he knew origins of anything, Mark Twain, Gibson guitars, electromagnetic radiations. I barely knew his fascination in broadcasting, in music, though his big band rehearsed occasionally in our living room, music my dad arranged on charts by hand, the home invasion of oddball sax players and drummers a wonder. He’d laugh on days-away mountain camping trips with all five kids. Stored Pabst in the cold-running creek, cooking on the Coleman, sleeping in the tent. The air prickly of pine trees, campfire and exploration.

A surge of sudden, honest affection: My dad’s love shone in kind of strict, militaristic ways, he served in the Air Force, and I know in dad’s mind it was as big as the Christmas trees he planted in the front yard after my big sister’s first Christmases here. Those trees grew four stories high, tallest damn trees on the street, in the world. The tender way he nurtured our family dog ​​Samantha, and the kisses at bedtime on his thorny, five-o-‘clock-shadowed cheek. How when he died several years ago he was my favorite human, I’d long ago lost any fear of him, whatever leftover rubble was mine to deal with.

My parents met and fell in love when they’d both worked at KOPO radio in Tucson. Maybe they shouldn’t have married. My mother later moved on after her infidelities. Things that were never talked about. The rape my mother suffered before they were together.

The three-bedroom, one-bath house met the more-than-modest standards of tract housing built for working-class families in the mid-1950s, mowed over creosote bush and prickly pear, Christian families settling in for work at Hughes Aircraft Missile plant (now Raytheon) or Davis Monthan Air Force base, or in my father’s case, cameraman and then chief engineer at KOLD-TV, channel 13, who raised five children here on that salary. How ours was built for safety, cared for that way, and protection. My parents were the first owners, proud, and you can see it in the eyes of my father in a black and white photo standing outside of the house with his father, when the construction was just completed. I was the fourth born here of five children, arrived home from St. Joseph’s hospital in the 1960s.

In the 8mm home movies my father shot of all of us growing up on Kenyon Drive, the grainy vérité reveals awkward, deceptively elated worlds beyond the known ones, Easter dresses and first communions, camping trips and a sparkly bike beside the Christmas tree for my big brother who wept in joy. Showed parents doing what they knew, likely what their parents taught them. So much of it a kind of DNA to unlearn.

The early dark nights in a dark neighborhood and the big kids down the street with long hair and the Rolling Stones, aliens banned to my father. Their stories of mythical murderers, “The Pied Piper of Tucson is coming to get you! Charles Manson is coming to get you!” would terrify me at night in our room, on the bunk bed with my big brother on top and my little brother on the rollout bed beneath mine. But I knew this house was my fortress, my father my protector, those big mean hands could take on anyone. I’d go into the darkness, finally. The whir of the swamp cooler, the damp air of indoor summer nights, lulling seven sets of eyes to sleep.

I lived in this house the first eight years of my life, we moved at my son’s age to a bigger home further east, where things fell apart.

I wish to tell the current owners of the Kenyon house I’m grateful for their obvious love of this sturdy red-brick home. It is well kept; gravel, cacti and concrete in place of lawns my big sister would trim along the sidewalk with hand shears. The Christmas trees are long gone. But the curb on which we sat waiting in burning sun for the ice-cream man, its rounded-top concrete, is the same.

Back in front of the house, two-year-old Rickie is running around in the yard, the exact spaces I played in at her age, laughing in her bumble-bee suit. The melancholy and old-world memory debris recedes, something else takes its place.

Rickie somehow knows she is trespassing, such mischievousness, and from old home movies I can see my big sisters in her. This is not our home, but I swear she senses a connection.