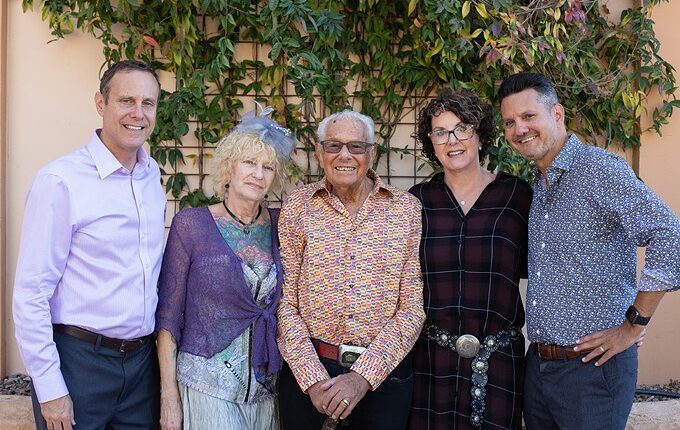 Tucson lost a true treasure on christmas. After an illness, local businessman and philanthropist Donald Luria died at home surrounded by his family. hey what 87

Luria owned and operated the Tasting Spoon Cooking School and later opened the Terra Cotta Cafe, where he met his wife of 35 years, chef Donna Nordin. He co-founded the Tucson Originals, an alliance of independently owned Tucson restaurants and food purveyors. He also headed the Council of Independent Restaurants of America.

Before he moved to Tucson, Luria worked for the US government and, for a time, with Washington, DC, Mayor Marion Berry. Luria worked in education, participating in seminars held around the United States.

He was a philanthropist and lived his philosophy of giving back, serving on nearly two dozen nonprofit boards.

“Dad was humble, kind, authentic, generous with his ideas and time and energy,” said Michael Luria, the older of his two sons.

“He truly encapsulated a spirit of philanthropy, giving back, being an active, engaged member in your community and doing one’s part to help make it better.”

Luria served as mentor to many Tucson business people, including Kate Marquez, director of the Southern Arizona Arts and Cultural Alliance (SAACA).

“Don was both a friend and mentor – personally and professionally,” she said. “Professionally, our paths crossed when he began his leadership as a board of director of the Southern Arizona Arts and Cultural Alliance over 11 years ago. Since that day so many years ago, he has played an integral part in SAACA’s success and dedication to thinking outside the box.”

Marquez said even after his restaurant closed,. Luria remained passionate about food and hospitality.

“Because of the soft-spoken Luria’s seamless ability to turn big dreams into action, his passion for culinary arts has helped pave the way for groups such as SAACA to think of food as a cultural art,” she added.

“As a result, food and art go hand in hand in defining the diversity of culture in Southern Arizona. In 2019, SAACA dedicated our Teaching Kitchen at the CATALYST Creative Collective to Don Luria and his wife, Donna Nordin, in honor of their passion for teaching and deep love for the community they call home.”

Luria was passionate about Tucson and his family. He inspired his four children to make their communities a better place to live.

Debbie “Wednesday” Loria said she never lived in Tucson, so she did not see him as a community icon. She lives in the Washington, DC, area.

“Even though I knew that he did all these things, really, I just feel like saying, ‘but he was just my dad,” she said, “and he was the best dad.”

Things between Wednesday and her dad weren’t always smooth sailing, she said, but a couple of years ago she spent time alone with him when the family embarked on a food tour of Europe.

“I stayed home with my dad in Tucson,” Wednesday said. “I just have to tell you, it was the best week and a half ever because we really bonded even more. We listened to country music. We watched the Ken Burns’ documentary about country music. We watched ‘Les Mis’ twice because that’s my favorite. We just spent a lot of time. To me that is always going to be my favorite memory, just him being my dad.”

In fact, Wednesday said she inherited her love of music and philanthropy from her dad. She runs a backyard venue where local music acts come to perform.

“Really, (dad) is the person who gave me folk music,” she said. “Joan Baez, Judy Collins, Arlo Guthrie, and that’s led to my love of Americana music. During the pandemic I just felt the need to support local music. Even though I’m not on any boards like my siblings, that’s my giving back to the community.”

Michael and his sister, Cindie Luria Wolfe, live in Tucson.

“As sad as I am, there’s just immense gratitude for who he was, the things he taught me and, I think, my siblings, about the importance of community and philanthropy,” Michael said. “How can we not be so proud of what he accomplished in his life?”

As he aged, Luria found pleasure in the simpler things.

“He loved his family,” Michael said. “He loved gardening. He got onto a kick about sunflowers. He had sunflowers everywhere. Last year he had one that was about 14 feet tall. He took such joy out of it”

Another of Luria’s pleasures was sitting in the sun.

“One of the things that makes us all smile is he went out the way he wanted to, with a full head of hair and a very deep tan,” Michael said with a laugh.

Cindie is a Tucson real estate agent. She said she spoke with her dad on Christmas. He was ready and he went quickly.

“It was what he wanted,” she said. “He felt like he was done, and he had been experiencing pain. He knew he had accomplished a lot and his last two targets were meeting both of his great-grandbabies and literally he had just done it.” They are Cindie’s grandchildren.

Luria also inspired Cindie to philanthropic causes. She has served on the board of Ben’s Bells and now she will serve on the Beads of Courage board.

“It was very important to him when we all started following in his footsteps,” she said.

Andrew Luria, youngest of the children and also a Tucson resident, said his dad inspired him to think about others first.

“His legacy is really his community involvement,” he said. “He had this passion for engaging in, and being part of, the community.”

Andrew began his own philanthropic work as early as high school, when he organized a Spirit Day and his dad showed him how to get sponsorship from corporations. As an adult he moved to Atlanta and the Los Angeles areas, where he worked with organizations that focused on those who were diagnosed with HIV/AIDs.

“I just remember being very proud to tell my dad that I was doing it,” Andrew said. “I think to me his legacy is just his passion for finding ways to give back to the community, to the underserved and to people who aren’t always seen by the general community.”

Andrew continues supporting those causes, and today serves on the board of Ben’s Bells, something his dad and sister also did.

There is something else, too, that Andrew said speaks to his father’s character.

“(As) part of the LGBTQ+ community, my father and (step-mother) Donna, quite frankly my entire family, accepted me for who I was with open arms,” he said. “It didn’t faze him when I came out to him, so much so that I was bothered. I waited all this time (to come out). I thought it was going to be a big to-do, and it was nothing. It was like, ‘What are we going to do for lunch?’”

Luria will be missed by his children, yes, but also by all of Tucson.

“I, along with the whole Southern Arizona community, will miss this man we will always call friend,” Kate Marquez said.