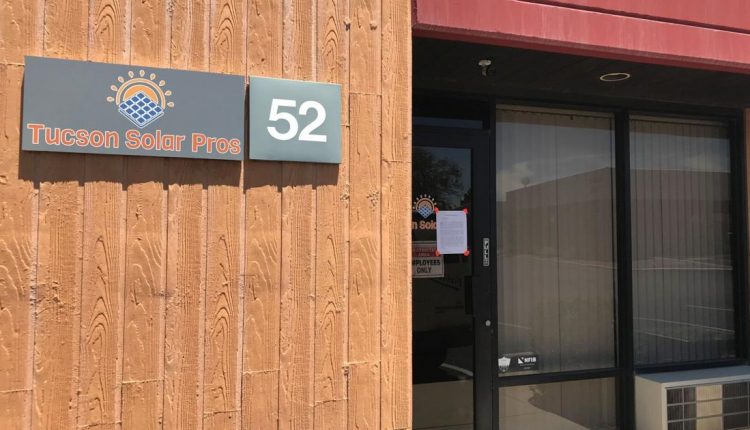 Dozens of Tucson residents are out thousands of dollars for rooftop solar systems that were never installed or left unfinished by a local solar company that has lost its state contracting license.

The Arizona Registrar of Contractors revoked the solar contracting license of Tucson Solar Pros last week, after investigating nearly 30 complaints from customers including many members of a local credit union.

The company is out of business and was recently locked out of its midtown office by its landlord.

Tucson Old Pueblo Credit Union says 39 of its members signed contracts with Tucson Solar Pros and took out loans with the credit union for solar installations generally costing $30,000 to $35,000.

The credit union, known as TOPCU, says the company has left more than $1 million worth of contracted projects unbuilt or unfinished, and it has temporarily suspended members’ payments on loans for those projects.

The owner of Tucson Solar Pros has blamed the credit union, along with economic conditions, for his company’s collapse and called prospects for customers recovering their money “grim.”

Nonetheless, customers are searching for answers and accountability from both the company’s owner and the credit union.

Kate Vesely said she and her husband were looking to help the environment and cut their power costs when they took a friend’s recommendation and signed a contract in February with Tucson Solar Pros to install a rooftop solar system on their east-side home.

They took out a loan with Tucson Old Pueblo Credit Union to finance the $37,000 system cost, but the company never began work to install the photovoltaic panels after months of delays and excuses.

Now, the couple is stuck with a loan that will cost more than $50,000 including interest, with nothing to show for it so far.

“This all started because we wanted to do something good for the environment, but the stress of this whole situation has been crushing,” said Vesely, a Pima County employee. “Over $50,000 — that’s college tuition, that’s a new car, that’s a big quality life issue for my family, my children.”

Last week, the Registrar suspended and then revoked the contracting license of Psalm 112 LLC, which does business as Tucson Solar Pros, and its owner, Daniel Ridlinghafer.

In a statement to the Star, Ridlinghafer blamed the company’s problems on TOPCU, which he said began delaying payments from loans on the company’s solar projects a few months ago, as well as “record-high inflation, supply-chain issues and staffing shortages. ”

Ridlinghafer said the company was “slightly behind on a few solar projects” when TOPCU began withholding payments.

Ridlinghafer said using TOPCU for most of its project loans put the company and its customers at risk and apologized for that “and any other mistakes I made.”

“It’s our desire to complete all our customers’ projects, but unless TOPCU is willing to work with us to achieve a favorable outcome for our customers, then I’m afraid the outcome looks grim for our company and customers,” Ridlinghafer said.

Ridlinghafer did not address what happened to the $1.1 million TOPCU says the company was paid for projects that were not completed.

Vesely and other customers left in the lurch by Tucson Solar Pros say Tucson Old Pueblo Credit Union bears some responsibility for their prospective losses.

They contend that the credit union had been improperly paying the solar company fully upfront for projects, instead of making payments as construction progressed.

Vernon Babilon, CEO of Tucson Old Pueblo Credit Union, said he sympathizes with the customers and the credit union is reaching out to them and doing what it can to help the affected members.

“Even though the contract is between the customer and the solar company, we’re not a part of the contract, we want to do everything we can for our members,” Babilon said.

“We’re going to reach out to every single one of those people and see what we can do about getting their projects finished, and for some or hopefully all of these at no additional expense to them, or minimal additional expense,” he said .

Babilon said the status of the affected members’ projects is a mixed bag.

TOPCU, which was founded in 1935 by Tucson firefighters, police and other city employees, began promoting its solar loans several years ago and has worked with about 25 local installers, including about a dozen most active recently, Babilon said.

The credit union began working with Tucson Solar Pros about three years ago, and 46 members had solar systems installed by the company without problems up until last fall, Babilon said.

“It was a great company at one point in time, and we really don’t know what happened,” he said, adding that the credit union began suspecting Tucson Solar Pros was having problems last fall.

“That’s when we started to ratchet back (on payments) as he was asking for more money for some of these jobs,” he said.

Consumer advocates advise against fully paying for any contract work upfront, and contractors typically require a down payment, then agreed-upon “progress” or milestone payments with a final payment upon completion and inspection.

Some states, including California and Nevada, limit the amount of down payment a contractor can require. Arizona generally requires project owners to make “progress payments” to general contractors on contracts lasting 60 days or more, based on a 30-day billing cycle or other agreed-upon schedule.

Babilon said the credit union had no marketing or similar agreement with Tucson Solar Pros, except the agreement the contractor made for access to an online payment portal.

Midtown resident Jordan Fernandez, who took out a $23,000 loan in January to pay Tucson Solar Pros for a system that was never installed, says TOPCU bears its share of responsibility for the members’ losses.

“I think the credit union needs to eat the loss,” said Fernandez, who runs a marketing agency and works as a freelance writer. “They were doing a very bad job of lending money and were handing money over to a guy who had no intention of getting the work done.”

Another affected TOPCU member, Vail resident Justin Villarruel, said credit union officials have been responsive but seemed to “backpedal” on their involvement as complaints grew.

Villarruel said he signed a contract in January for a solar installation and a required new roof for about $40,000, plus about $10,000 for a new heating and air-conditioning system.

After many delays, Tucson Solar Pros finished the new roof in mid-March and installed solar panels in May.

But the roof leaks badly and will have to be replaced, and Tucson Solar Pros never connected the solar panels and wiring and has since ignored his pleas to fix the problem.

“The roof has to come off because they didn’t know what they were doing,” Villarruel said.

He said he has filed complaints against Tucson Solar Pros with the Registrar, the Attorney General and the Better Business Bureau and intends to file a criminal complaint with local police.

“It’s not mismanaged funds. It’s a criminal matter when you have a business owner who’s out there and taking money and signing contracts with people with zero intention to do any of the work,” said Villarruel, who quit his job as a traveling pipeline inspector in May to stay home try and resolve the matter.

Tucson Solar Pros customers left in the lurch may have limited recourse to recover their money.

The company had posted a surety bond of $10,000 with the registrar, which can be tapped by consumers through a claim to the bonding company or through a court judgement.

The Arizona Contractors’ Recovery Fund provides refunds once a bond is exhausted, but payouts are limited to $30,000 per claim — and just $200,000 per licensee.

Vesely, who said she has retained an attorney to help her, said she thinks consumers need greater legal protection against unscrupulous contractors.

“Of course, I wish to be made whole — but on a larger scale, there needs to be better protection for others,” she said. “Whether it be nefarious intent or simple money mismanagement, it should never be an option for a solar company to take full funding without any demonstration of work completed or milestones achieved.”

Watch: How Nursing Homes Put Friends and Families on the Hook for Residents’ Debts