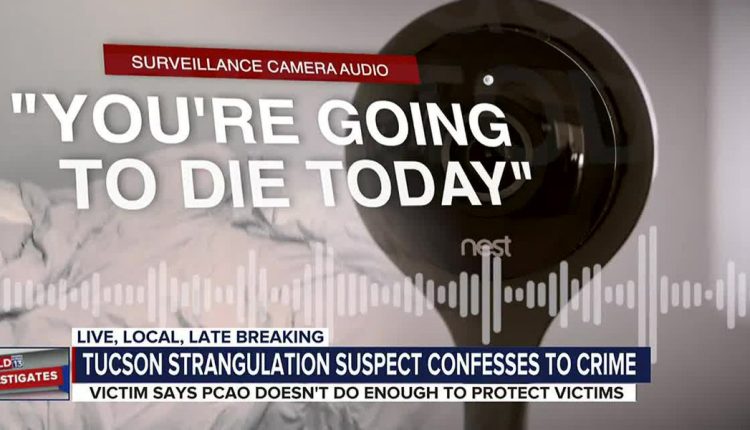 TUCSON, Ariz. (KOLD News 13) – A confession from a Tucson man accused of strangling his girlfriend.

Yet he’s released right after his arrest and offered a plea deal.

She and her family are angry calling it a rubber stamp process that’s putting lives in grave danger.

They have a son together, but when she recently broke off the relationship, she said, he beat her in her bedroom.

“He just started hitting me, like stomping on me with shoes on, hitting me in the face,” McDonough

In another room, a surveillance camera picked up the sound of her being strangled.

At one point Rodriquez tells her “you are going to die today”.

She said it wasn’t the first time he’s strangled her.

“It happened probably like 50 times throughout our relationship, if not more,” she said.

There are dozens of pictures of them depicting years of domestic violence, from bruises to blood.

McDonough finally called the Pima County Sheriff’s Department hoping her nightmare would be over.

But her family says that’s far from the case.

Deputies arrested Rodriquez a week later on charges of kidnapping and impeding breathing, both Class 4 felonies based on state statutes.

That’s after he confessed to the crime during questioning.

We obtained the audio.

In it, he had first denied he strangled her, but later admitted it.

The audio reveals detectives showed him pictures and told him they listened to the 12-minute audio of the attack.

It’s unclear whether the judge in his Initial Court Appearance knew about the confession.

The judge released Rodriquez and he’s out on his own recognition, the recommendation of Pretrial Services.

The Pima County Attorney Office recommended a $2,500 bond because Rodriquez is a “risk to the community” and there’s a “high risk to reoffend”.

A Grand Jury determined one of the charges wasn’t enough and moved it up from a class 4 to a class 2 felony that comes with a stiffer punishment.

The family thought they had a strong case, which included Angel’s confession, audio of the strangulation and photos of the domestic violence.

So the family was floored when the Pima County Attorney’s Office offered Angel a plea deal.

“The prosecutor came back and offered what they call a class 6 felony,” said Sharon McDonough, her mother.

Court documents show the prosecutor dropped the strangulation charge and reduced the kidnapping count to the Class 6 felony.

The punishment is the least severe of all felony crimes and the family was told the felony can be designated as a misdemeanor in the future.

”The commentary was, ‘It’s a he said, she said.’ And we said, ‘Yeah, well this one’s not, because we have this audio.’ And then they say, ‘Well usually you don’t have a willing victim who’s willing to go to court.’ I said, ‘She is. You don’t usually have the proof and the pictures and the willingness to just tell the story and here you have it. You have all the pieces,’” she said.

After fighting against the plea deal the Pima County Attorney’s Office revoked it.

A prosecutor dropped the Class 2 felony kidnapping charge, but brought back the Class 4 felony strangulation charge.

Sharon McDonough says a prosecutor later apologized for the first plea deal and thanked her daughter for being brave enough to report the attack. But it only happened, the family said, because they fought for it

KOLD reached out to County Attorney Laura Conover requesting a sit down interview on this strangulation case and the protocols.

She declined and sent a statement instead.

“As always, PCAO doesn’t comment on the facts of a specific case while it is pending in court, under Arizona rules 3.6 and 3.8 and to preserve a fair trial for the accused.

When talking about domestic violence cases, we can point out generally that most of these cases come in as an emergency after a trauma has occurred. That means there is limited information presented to both the court and our office in order to hold the initial court appearance and open the criminal file. However, prior to offering a plea agreement, we review the evidence, criminal history, nature of the charges, and potential sentence at trial. A plea is then drafted and sent to the victim to review and offer input. If a victim does not approve, we meet with the victim and reevaluate the plea. If additional evidence is discovered, such as disturbing audio or video evidence, a case will also be reevaluated. The plea offer may change, more serious charges might be added, or the case may even be determined to be a trial-only case.

Far from a rubber stamp, these domestic violence professionals stay in constant analysis and in constant communication with victims who choose to participate.”

We are far from done with this strangulation case as our investigation “A ‘Plea’ for Help” continues.