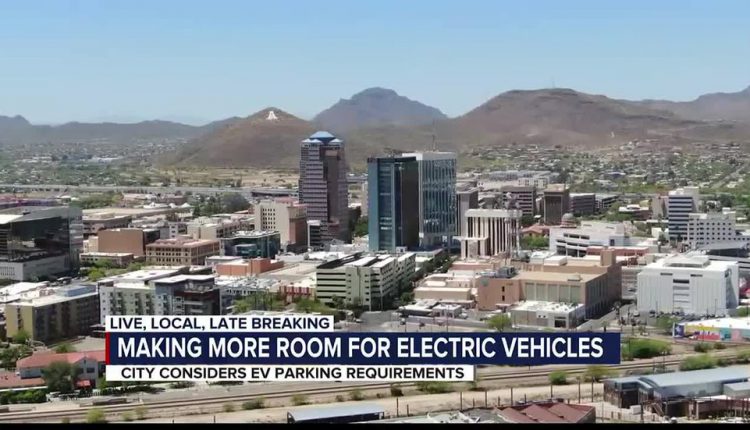 TUCSON, Ariz. (KOLD News 13) – The city of Tucson is taking another step towards becoming carbon neutral by 2030, a goal it set last year.

It will hold a public hearing next week to hear arguments on a proposed code amendment which will require new construction to set aside a certain percentage of their parking spaces for electric vehicles.

EV’s may be one key element to becoming carbon neutral.

The new construction will include office buildings, multi-family dwellings (apartments) and commercial retail.

“Really, we’re just getting started,” said Daniel Bursuck, the Principal Senior Planner for the city of Tucson. “But this is a really big step moving forward.”

Under the code change, all new multi-family dwellings will need to set aside 25% of their parking spaces for electric vehicles.

This is the second step the city has taken. Earlier it passed a code change which requires all new single family dwellings to be EV ready or capable.

The biggest reason, aside from the emissions savings, it that it’s much cheaper to put in the needed infrastructure when building rather than going back later to make the needed adjustments.

“It is three to four times as much after construction to go back in retrench, put in all the infrastructure than to do it when you first build,” Bursuck said.

EV’s are only 2% of the auto market right now but that’s expected to change rapidly.

“There are a lot of things pointing towards that,” said Bursuck “Available today there are 50 EV’s that are currently on the market, and by next year there should be 130 different EV’s on the market”

“The auto manufacturers have already signaled this is coming,” said Ward 6 City Council member Steve Kozachik. “So what we’re saying lets be proactive in the city of Tucson.”

By being proactive, Kozachik says it’s time to prepare for what’s inevitable rather than trying to catch up later.

“The reality is we’re trying to make sure people who enter the EV market that they have a fair chance of getting their cars charged,” Kozachik said. “All we’re saying is get your place ready for it because the manufacturers have already said that this is the wave of the future.”

The new rules will not cover existing apartments or commercial buildings, only new.

“We’re not going to require somebody to go back and retrofit what they already have there,” Kozachik said. “That could be a substantial cost and I don’t think that would be fair to the property owners.”

The city also says it will be flexible on some of the rules because not all construction is the same and it could cause issues for some of the EV owners.

“We don’t want to be in a situation where the apartment complex didn’t have enough parking b ecause there are there EV spots that no one is using to charge them EV’s,” Bursuck said.

The public hearing is Tuesday, April 19, 2022 during the evening city council meeting.

To Win The NBA Title, The Phoenix Suns Will Defy Convention