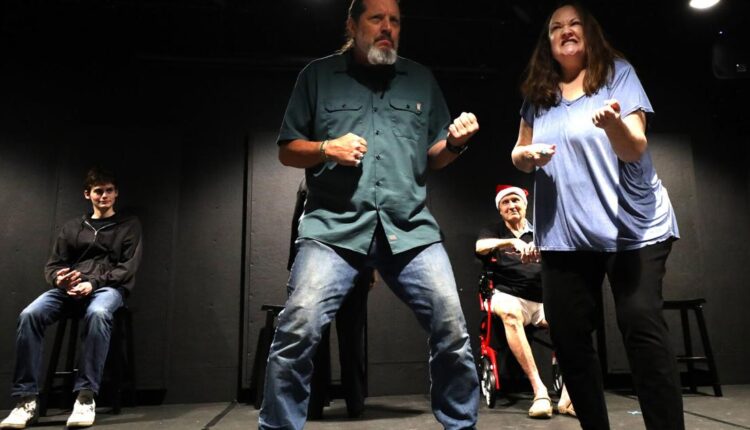 A local theater that has hosted donation drives for other area groups for years is now supporting visual artists by providing free gallery space.

Unscrewed Theater will celebrate its ninth birthday in January. The nonprofit is run largely by volunteers, including its performers.

“We’re doing this because we love what we do, we love making people laugh,” said its executive director Chris Seidman.

The theater was started by the group’s founding house troupe, “Not Burnt Out, Just Unscrewed,” which just celebrated its 20th birthday. After gaining momentum, the traveling group decided it was time for its own theater, setting up shop on Speedway across the street from The Loft Cinema.

Unscrewed moved into its current location in 2018, on East Speedway near North Swan Road, but because the space was smaller, Seidman and others started looking for additional space to use for classes or community rentals.

“We were fortunate enough that this place was directly next door to our theater, and a few months after we opened, the previous tenant moved out,” Seidman said. “It was pretty much turnkey when we moved in. The only thing was the sound was horrible.”

They fixed the acoustics, adding panels to the walls and ceiling, but it still wasn’t quite right, according to Seidman.

“There wasn’t really anything to kind of make the place pop,” Seidman said.

That’s where operations committee member Barbara Schork came into play, suggesting they get some art onto the walls.

“I found the artists in a couple of ways,” she said. “The first artist we used is a friend of mine.”

That artist recommended a photographer, who became the space’s second featured artist. Watercolor artist Pat Inman was the third to be featured and the theater is now on its fourth.

“We’re booked until at least the end of next year,” Schork said.

Seidman says they don’t consider it a gallery space, but the addition of art has benefited people who rent the space for meetings, as well as the theater’s improv students who take classes in the room and can be inspired by the creativity surrounding them, Seidman said.

The meeting space is in frequent use, meaning the artists’ work gets exposure.

“The initial idea was just kind of to allow artists to take things they might normally have in storage and put it on walls and have it displayed somewhere,” Seidman said. “But now that we’re coming out of the pandemic, any time we have a new artist put their work in, we want to have an opening reception that they can promote, as well.”

The meeting space is open during Friday and Saturday show nights for theater patrons and community members to visit and view the art. The space is free for artists to use and the theater doesn’t expect any compensation for works that are sold.

“This gives them a chance to get their work out to people who might otherwise not come to an art exhibit,” Schork said. “If they sell something and would like to make a contribution to the theater, that’s great. If not, that’s OK, too.”

After watercolor artist Inman found out about the opportunity to show her work at Unscrewed, “I hung 22 paintings.”

Inman said the exposure generated a couple of sales but that sales don’t fuel her artistic drive. “I just love it,” the retired educator said.

Inman also shows her work with the Southern Arizona Watercolor Guild, which has monthly shows. Still, she’s grateful for the opportunity to get in front of a different audience.


“Any time you can expose your work to people, that’s helpful, because art is one of these subjective things,” she said. “The thing about art is you’re putting yourself on the line. You’re putting something from your heart and soul out there and you really have to think about that before you display your art.”

Inman commended the theater for its desire to help visual artists, saying it has a “fine idea there of helping out the community.”

The theater has long given back to other nonprofits, through its monthly partnerships, Seidman said.

It has worked with national groups and grassroots organizations, spreading their messages, while raising awareness and collecting much needed donations.

“There’s a really good opportunity for us to give back to other nonprofits and provide them a place where we can collect donations for them and they can speak in their own words about their organization to the audiences at our shows,” Seidman said.

COVID put a damper on the efforts, but in 2021, the theater partnered with the Pima County Health Department to host vaccine clinics. It also hosts Red Cross blood drives, hoping to provide a convenient location.

Over the last five years, Seidman estimates the theater has raised tens of thousands of dollars.

“We like to put the call out to the people in our organization to connect us to organizations they’re passionate about.”

Readers and Tweeters Chime In on Disability Rights and Drug Discounts