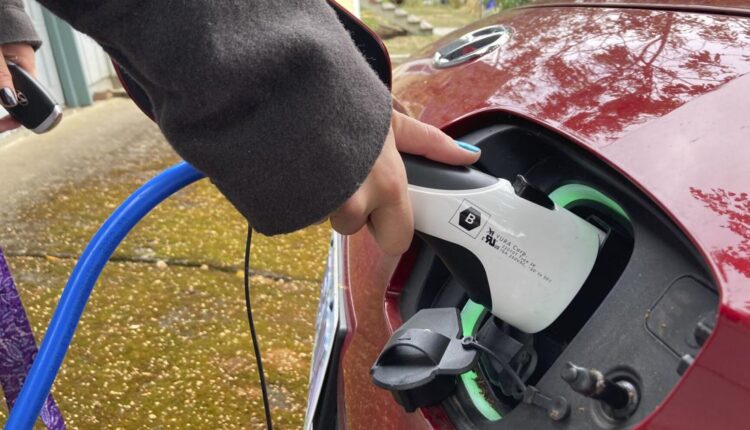 Tucson has significant headway to make in transitioning its fuel-powered cars to electric vehicles in the next 10 years as part of its efforts to reduce greenhouse gas emissions while realizing long-term cost savings.

The City Council adopted the “Electric Vehicle Readiness Roadmap” in April 2021, which includes the lofty goal of replacing the city’s entire light-duty fleet with electric vehicles, or EVs, by 2030.

The city’s current fleet of 2,405 vehicles only has three EVs, according to the Environmental and General Services Department. The figures don’t include Sun Tran services, which has 10 electric buses.

Tucson could save $15 million by replacing light-duty cars and trucks with EVs throughout the next decade, according to a recent report from the Arizona Public Interest Research Group Education Fund, which surveyed the fleets of the state’s 10 largest municipalities.

The report showed the surveyed cities and towns spend more than $65 million on maintenance costs and $33.5 million on fuel per year.

Eliminating gas and diesel-powered vehicles would help municipalities save on increasing fuel costs and maintenance. Plus, the study says, EVs are becoming more affordable and available in different models, including pick-up trucks frequently used in city fleets.

“Gasoline and electric vehicles are continuing to move towards parity when it comes to upfront costs,” said Diane Brown, the executive director of Arizona PIRG Education Fund. “However, electric vehicles do not require the level of operating and maintenance expenses, and therefore save electric vehicle drivers money each year.”

The environmental benefits of EVs are also a top priority for the city, as the transportation sector is the top contributor of greenhouse gas emissions in the US

City Council adopted a Climate Emergency declaration in 2020 with the commitment to reach carbon neutrality by 2030 — a goal that electrifying vehicles could help the city achieve.

Tucson is developing a policy to ensure EVs are purchased whenever available to replace retiring cars in its fleet, but the supply of EVs isn’t yet meeting the city’s demand for them.

Tucson has ordered 26 EVs at a cost of about $2 million since adopting the roadmap last year, according to the environmental department. However, supply chain issues are slowing the vehicles’ delivery due to short purchasing timeframes, increased demand for EVs and order cancellations.

The city determined that about 28% of its fleet could transition to EVs. But not every vehicle has an EV equivalent to perform the same function as a fuel-powered car.

This fiscal year, the city plans to spend almost $5 million to replace 90 vehicles. Only 35 of the cars are set to be replaced with electric or hybrid vehicles, according to Carlos de la Torre, director of the Environmental and General Services department.

Despite current challenges, the Arizona PIRG Education Fund report takes a positive outlook on the growing availability of EVs.

“The report documents the need to transition to electric vehicles, not to turn the fleet over immediately,” Brown said. “Supply chain issues and consumer demand are likely to be addressed by the time municipalities will need to transition their fleets.”

Given the increased need for charging capacity, infrastructure is a large up-front cost that municipalities transitioning to electric fleets have to address. Tucson’s mayor and council have approved code changes to ensure a certain percentage of parking spaces at new developments have EV charging capacity. Retail, residential and office spaces are all subject to the code.

Now, staff are looking at charging infrastructure at city-owned facilities and have identified four potential sites: Tucson Police headquarters, Tucson Fire Central, Tucson Water Plant 1 or the Thomas Price Service Center. About $1.8 million has been budgeted for design and construction of the charging infrastructure to build within 1½ years.

The city also received a $12.1 million grant from the federal Low or No Emission grant program for electric-powered buses that de la Torre said. Staff are still looking at the best way to spend.

The environmental department director will likely provide City Council an update on the EV fleet replacement program at its Jan. 11 meeting.