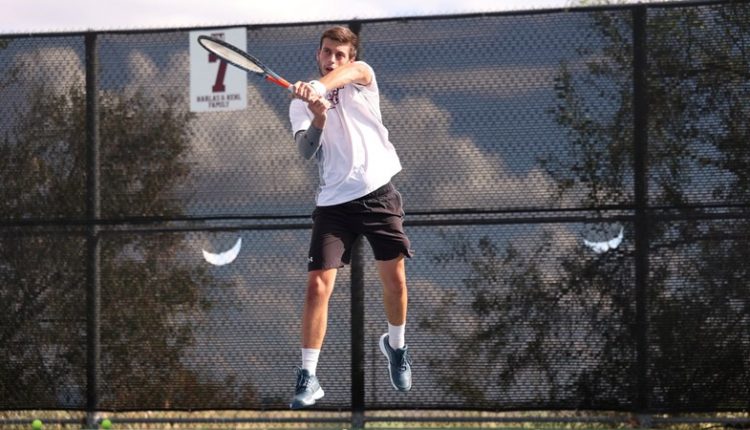 Tucson to Serve as the Start Site for Aggies’ Season

• For the first time in the 2022-23 academic year the NM State men’s tennis team returns to the courts, making the trek to Tucson, Arizona for the Arizona Invitational at the LaNelle Robinson Tennis Center.
• The three-day event is set for Friday-Sunday, Sept. 16-18 and will begin with doubles play at 9:00 am each day.
• Participants from six teams – Abilene Christian, Arizona Christian, Lamar, NM State, Northern Arizona and Western New Mexico – will descend on the Old Pueblo for the three-day invite.
• The Aggies return six players from last season – Corey Clarke, Luca Fe D’Ostiani, Itay Feign, Ryan Ford, Vassanth Mathan, and Jordy Visser.

• Doubles play will kick off the weekend on Friday as Roko Stipetic and Corey Clarke team up to take on Facundo Tumosa and Maikel de Boes of Northern Arizona in the Wildcat draw at 8 am
• Meanwhile, the other three Aggie doubles teams will be competing in the Beardown draw also on early Friday morning. Henrik Lynum and Vassanth Mathan will play alongside one another against Wyatt Anderson and Ntal Richards of WAC counterpart Grand Canyon.
• Itay Feigin and Jordy Visser will also make their season debuts as a doubles unit against members of the GCU team as they face Martim Marujo and Paolo Rosati.
• The final doubles team representing NM State in Arizona will be Luca Fe d’Ostiani and Ryan Ford. The sophomore tandem will collide with Daniel Torres and Morgan Donovan of NAU.

• In singles play, Mathan, Lynum, fe d’Ostiani and Ford will each partake in the Black draw this weekend with play starting on Friday at 8:30 am
• Mathan will see GCU’s Anderson, Lynum will take on Morgan from NAU, Ford will collide with Martin Bats of Gonzaga and fe d’Ostiani will receive a bye before facing the winner of the match his teammate Lynum is playing in.
• The White draw is where Stipetic will begin his singles career as an Aggie as he prepares to face Arizona’s Jared Horwood at 11:30 am on Friday.
• Itay Feigin will serve as the lone Aggie in the Red draw as he takes on Eric Padgham of Arizona at 10:30 on Friday morning.
• Coming off a campaign in which he earned Second Team All-WAC honors, Jordy Visser starts his season against Dominique Rolland of Arizona.
• The final member of the Aggies that will be competing in singles play this weekend will be Clarke. His weekend begins with a match against Arizona’s Jay Friend on Friday at 9 am

• A trip to Colorado is in order for the Aggies as they head to Air Force to take part in the Bedford Cup in the Mountains. The three-day ITA-sanctioned event will start on Friday, Sept. 23 and conclude on Sunday, Sept. 25.
• For complete coverage of NM State men’s tennis throughout the 2022-23 year, visit NMStateSports.com – the official home of Aggie athletics – and follow the Aggies on Facebook (NM State Men’s Tennis), Twitter (@NMStateMTEN) and Instagram (@ NMStateMTEN).