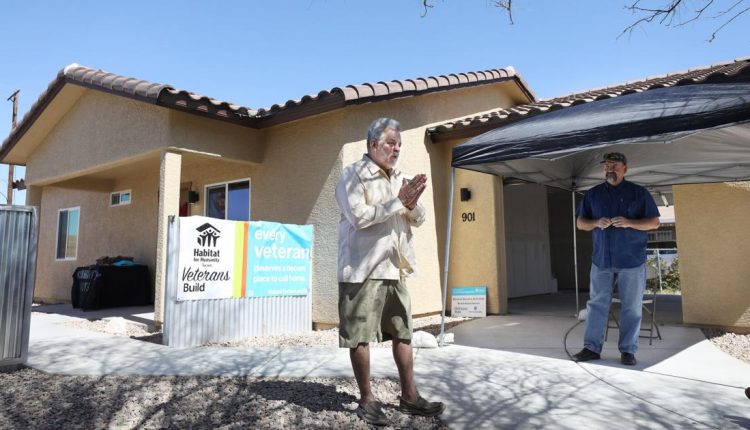 Usually about 50 to 100 people show up when Habitat for Humanity Tucson invites the public in to learn more about its program.

The last information session in February? over 300

“Families are citing rising rents, lack of affordable housing, unsafe neighborhoods and overcrowded conditions,” said Laura Sanchez, the agency’s director of marketing and communications. “There has been a huge increase in people seeking affordable housing in our community.”

Tucsonan Ignacio Gamez, 62, is one of the lucky ones. He learned about Habitat for Humanity’s opportunities for veterans a couple of years ago, and now finds himself the owner of a new two-bedroom home on East 24th Street.

The 20-year Navy veteran is extremely grateful for the opportunity and plans to offer the extra room to other veterans needing a place to stay for a night, or a while.

“I truly believe that the reason God blesses us is so that we can bless others,” he said.

Gamez participated in a program called Veterans Build, which started nationally in 2013 and quickly got picked up here.

Ignacio “Nacho” Gamez, center, greets people on the porch of his new Habitat for Humanity home during a dedication on East 24th Street.


“We have a very large and active veteran community here in Tucson, and it is an honor to be part of building decent, affordable housing for veteran families as well as advocated for veterans to have a safe stable place to call home,” said Charlie Buchanan, CEO of Habitat Tucson.

As the prospective homeowner, Gamez spent many hours assisting the builders and volunteering at Tucson’s Habistore. He says he enjoyed it all, and appreciated that he was expected to help.

“These guys and gals just roll their sleeves up and say, ‘Let’s get it done,'” he said. “They are amazing people.”

About 2½ million veterans heading households are 55 years or older, the National Low Income Housing Coalition reports. And, of those, 24% are struggling with housing costs. About 35% older veterans have a disability requiring home modifications and the need for support services.

In Tucson, about 448 veterans are using these federal housing vouchers to help them afford a rental but increasing rental costs are putting many at risk.

Gamez, who joined the military after graduating from high school here, was in a helicopter accident over the Indian Ocean during his service. He’s had several related surgeries for back problems, and may eventually need a spinal fusion.

“Over the last 15 years, I got more than I bargained for but I hate to complain,” he said. “I have friends who didn’t make it back, friends who are in wheelchairs.”

Ignacio “Nacho” Gamez chats with people after the dedication of his new Habitat for Humanity home on East 24th Street.


After retiring from the service, Gamez worked for over a decade for the Arizona Department of Juvenile corrections. He currently stays with a relative, but is looking forward to having his own space.

“In addition to our veteran homeownership program, we also have a home repair program that partners with low-income veterans for critical home and safety repairs like ramps, accessible showers and other livable repairs,” Sanchez said. “Through our programs, we help about a dozen veterans annually.”