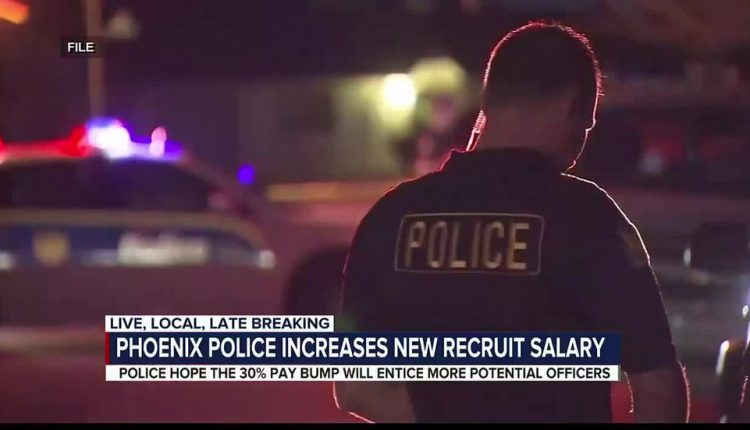 TUCSON, Ariz. (KOLD News 13) – The city of Phoenix has taken an unprecedented step to try to stop the attrition plaguing the police department which has hundreds of positions it can’t fill.

The city is offering a $20,000 bump in starting pay for new recruits bringing the salary for new hires to $68,000, one of the highest pay rates in the country.

What effect that might have on other departments who may lose officers to the city isn’t known yet but some are already feeling the impact.

Tucson city leaders set aside a million dollars to be used for pay raises for its officers but isn’t sure that’s enough.

“My expectation was that I wouldn’t have enough to meet some of the market adjustments based on some of the things happening up North in the Phoenix market,” Tucson City Manager Michael Ortega told members of the city council. “So what it is, I put in a placeholder.”

That placeholder was put on a spreadsheet outlining the city expenses including the police department. The million dollars still may not be enough. The news in Phoenix could not have come at a worse time since the city is in negotiations with the Tucson police union over pay raises.

“That is not a cap,” Ortega said. “That is a placeholder.”

Meaning that is just a number put on the expense line to take up space and may not turn out to be the real cost. It may be higher.

“Everybody in the state, every other jurisdiction in the state was pretty dumbfounded that the Phoenix mayor and city council took that move,” said Ward 6 Tucson city council member Steve Kozachik.” “It’s a decision they’ll regret three, four or five years down the road.”

One reason is because it goes far beyond just the base pay.

“One of the reasons why the decision Phoenix just made is so fiscally irresponsible is because it increases the base rate, but it also increases all the ERE, employee related expenses, part of which is the pension obligations,” he said.

Pension obligations which go on for years after they’re approved. The Phoenix law enforcement pension fund is already $2 billion in debt and is only 41% funded.

“We’re going to do something for our police department because one, they deserve it and two we have to stop the attrition,” Kozachik said. “But we’re not going to sell the farm and that’s what the city of Phoenix did.”