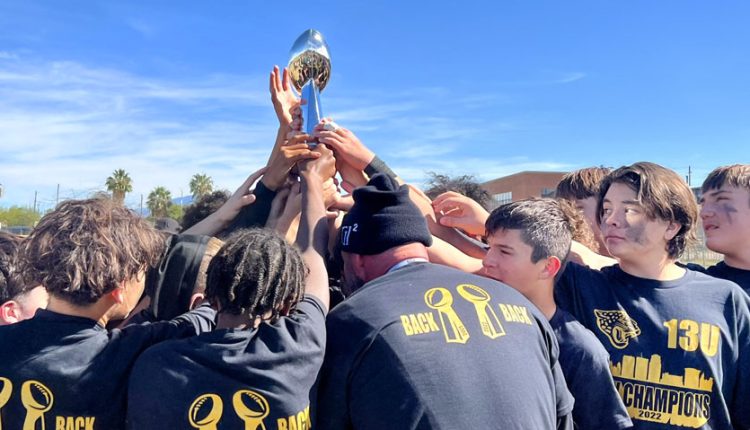 LINK: FREE 8U and 13U CHAMPIONSHIP PHOTOS

The 13U Jaguars dominated the field this year with a 9-0 record and scored over 400 points, including a 46-0 win over the Dolphins to capture the Tucson City Championship on Saturday morning.

The Wildcats Red beat the Vikings White to win the Flag Championship three weeks ago.

The 13U Dolphins had minimal possessions against the Jaguars due to a string of successful onside kicks that kept the high-powered Jaguar offense on the field and a running clock in the second half due to a 40-lead also limited opportunities for the Dolphins.

Maximus Alcoverde scored from 3-yards out to make it 28-0 in the second quarter and then Smith punched in a 1-yard dash to make it 34-0. Bondi found Jeremiah Johnson from 11 yards out for the 40-0 lead at the half. Issac Fierros scored from up close to make it 46-0 with 6:38 left in the game and that was also the final score with the Dolphins coming up short at the goal as time expired.

Maximus Alcoverde with a 3-yard td run. Jags lead 7:58 in the half. 28-0. Block extra. https://t.co/ohorvFz8Nn pic.twitter.com/YIgJGQyclu

Peyton Strand took the snaps for the dolphins with Brody Elicio other Ryan Luke in the backfield. KaneCollins caught an 8-yard pass.

The championship trophy presentation from TYFSF president Don Riley, a close friend of the late Julius Holt, the previous president. Tucson Jaguars 13U coach Jeffrey Smith then addressed his team. Jags will play in the regionals next weekend at Las Vegas. https://t.co/6cwPRYGTXM pic.twitter.com/kKw8B7TQdu