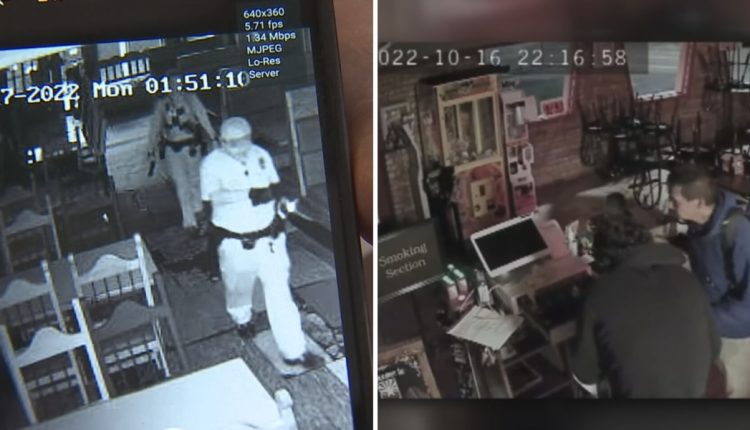 PHOENIX (3TV/CBS 5) — AZ Taco King started in a kitchen five years ago, and they opened their restaurant on 19th Avenue and Camelback Road. Down the street is Pepe’s Taco Villa, which has been open for 43 years. Both businesses are well-known in the community, and that’s why it came as a shock when they were broken into.

It was a normal day of business at AZ Taco King on Sunday night when owner Jaz Spears and her son locked up the restaurant and went home. Around 10 pm that night, Cox Security called the family to warn them there was motion inside their restaurant. “Me and my husband missed those guys in like four minutes,” Spears said.

The images on the security camera footage terrified both business owners; it was like a scene from a Halloween movie. One of the burglars had an ax in his hand. The burglars took a tablet, speaker, and some leftover change in the register and left a big mess. “My family’s here, my kids are here, and you know we made this home. In the last two years we’ve never got robbed,” Spears said, with tears filling her eyes.

Minutes after the break-in at AZ Taco King, security cameras caught two men walking up to Pepe’s Taco Villa right down the street. One man used the ax to break the back door. “I looked on my cameras right away and I saw there was someone running through the restaurant,” Pepe’s owner Luz Acosta said.

Spears called the police, and when they arrived, officers and a K-9 searched the area. However, the suspects left, leaving behind the terrifying weapon. “When the cop came out, they said, “hey, they left their axe,'” Acosta said.

Both business owners were left wondering what could have happened if they were still at their restaurants. They’re asking for the community’s help identifying the suspects as they clean up shop. The police kept the ax as evidence and are still investigating. Both restaurants are up and running. If you have any information, call Phoenix police.