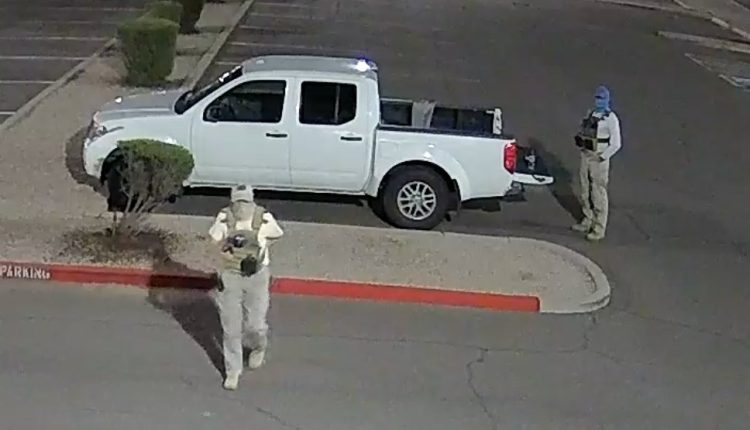 A federal lawsuit by the League of Women Voters of Arizona is aiming to stop extremist groups from surveilling dropboxes in Maricopa and Yavapai and counties.

The nonprofit Protect Democracy Project is representing the League of Women Voters of Arizona in the case. It seeks to bar three groups — the Arizona chapter of the Oath Keepers, the Yavapai County-based Lions of Liberty and Clean Elections USA, which is run by QAnon linked Melody Jennings — from continuing to surveil drop boxes.

The Arizona Secretary of State’s Office has already forwarded a number of complaints to state and federal prosecutors alleging that those monitoring drop boxes — who in some cases have been armed and outfitted in tactical gear — have been harassing and intimidating voters attempting to deposit their ballots.

The case accuses the groups of violating the Voting Rights Act, which prohibits voter intimidation, and the Ku Klux Klan Act of 1871, which outlaws conspiring to “prevent, by force, intimidation, or threat, any citizen who is lawfully entitled to vote, from giving his support or advocacy in a legal manner.”

“We expect it to move fairly quickly,” Will Ganoa, the state policy advocate for the Protect Democracy Project, said. “There are two weeks of voting left and time is of the essence.”

This legal challenge isn’t the first for Clean Elections USA, which is also facing a legal challenge from the Arizona Alliance for Retired Americans and Voto Latino on the same grounds. The two challenges could be consolidated, Gaona said.

Protect Democracy Project is asking that the court make the groups cease their activity and award punitive damages for intimidating voters, examples of which they cite in the lawsuit.

On Oct. 20, a 70-year-old voter and his wife were attempting to drop off their ballots at a Mesa drop box — which has become a point of contention — when they were approached by at least five men in their twenties and thirties. After depositing their ballots, the men began taking photos of them, their car, license plate and told the couple it was for “election security.”

The increased attention to ballot drop boxes is being fueled by the debunked film “2000 Mules,” in which conservative filmmaker Dinesh D’Souza alleged that supposed “ballot mules” were tracked by using cell phone geolocation data. The film alleges the people were paid to stuff ballot boxes with completed ballots, but provides no actual evidence such a thing happened.

The practice of submitting a ballot completed by another person, pejoratively referred to as ballot harvesting, is largely illegal in Arizona.

The film’s makers have refused to provide evidence backing up their claims, and Arizona Attorney General Mark Brnovich this month said both the FBI and the IRS should investigate nonprofit group True the Vote, which partnered with D’Souza on the film, for alleged fraud related to the claims.

Jim Arroyo, the leader of the Arizona Oath Keepers who is mentioned in the complaint, said in a July meeting that the group sent out an email to the more than 1,000 people on the group’s roster.

“For the November election, we would like to post people there, in addition to the cameras, to have eyes on target to be able to notify law enforcement,” Arroyo said, referring to the cameras the Yavapai County Recorder’s Office has already installed on the drop boxes around the county. “We have already coordinated with Sheriff (David) Rhodes, and he told us that, if we see somebody stuffing a ballot box and if we get a license plate, they will make an arrest and there will be a prosecution.”

Arroyo’s Oath Keepers are working with Lions of Liberty on what they call “Operation Dropbox,” a measure to watch all the drop boxes in Yavapai County. Their plan is to have “patriots” watch the drop boxes and report alleged incidents of “ballot box stuffing” to the Yavapai County Sheriff’s Office.

“Neither Defendants nor their volunteers will be able to determine whether people who deposit ballots are doing so lawfully as caregivers, family members, or household members of a voter,” the complaint says, referring to the people who can drop off ballots under state law. “Nevertheless, Defendants and their volunteers intend to photograph and report these individuals to law enforcement despite lacking any evidence of wrongdoing.”

Yavapai County is also at the center of another effort led by former Graham County Sheriff Richard Mack, who leads the anti-government extremist organization the Constitutional Sheriffs and Peace Officers Association.

Mack met with the Arizona Oath Keepers this month to discuss “election integrity” and an initiative led by True the Vote and Pinal County Sheriff Mark Lamb, according to CSPOA’s website. Mack’s group has been investigating alleged “voter fraud” with far-right Sheriffs across the country, often attempting to do things outside of their duties and jurisdictions such as impounding voting machines.

CSPOA and the Oath Keepers have long had close ties, according to researchers.

But in Maricopa County, the drop box monitoring is part of what’s called “Dropbox Initiative 2022.” The effort is led by conspiracy theorist Melody Jennings, whose website refers to “mules” repeatedly. On former President Donald Trump’s Twitter clone, Truth Social, Jennings has said that “ballot trafficking mules are about to be completely doxxed and put on blast at every drop box across America starting VERY SOON!”

Doxxing is the act of releasing a person’s private information, such as their personal phone number and physical address online. In the post, Jennings tagged Gregg Phillips, one of the main people behind the false claims in the film “2,000 Mules.”

The film has even been a major talking point on campaign trails this year, with gubernatorial candidate Kari Lake even paying over $3,000 to host a screening of the film earlier this year. It has radicalized people across the country to watch drop boxes to prevent supposed fraud. Ganoa said he hopes the lawsuit makes people think twice.

“It puts the Average Joe on notice that this conduct is illegal and the people engaging in it could include a lawsuit from the folks who are intimidated by this conduct,” Ganoa said, noting that the case includes unnamed defendants that Protect Democracy Project hopes to identify during the discovery process. “To properly put a stop to this conduct, figuring out who is engaging in it is important.”