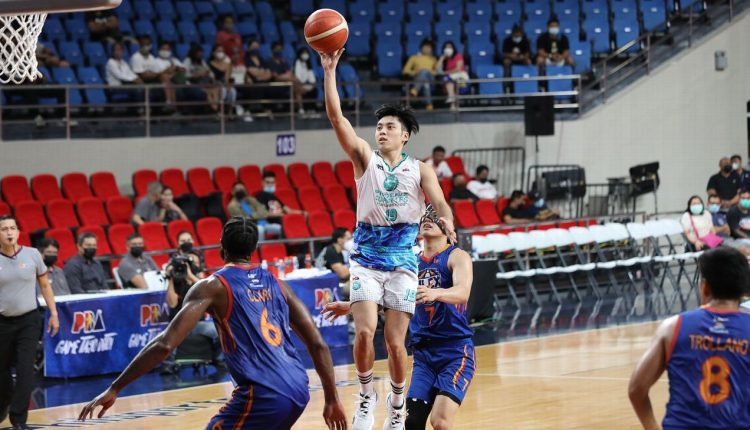 It took a personal coaching change, however, to unlock all the treasures he had in his chest — sure shot, sweet stroke, above average vision, active defense, all wrapped up in unflappable packaging. Tie a ribbon cut out from a winning tradition on top of all that, too.

With the full faith of Topex Robinson, the 5-foot-11 guard has turned into the gem of the 2022 PBA Draft for Phoenix Super LPG, posting per game counts of 13.3 points, 4.0 assists, 2.1 rebounds, and 1.2 steals in the ongoing Commissioner’s Cup. With his breakout of this conference, he stands on level ground with Blackwater Bossing’s Ato Ular as favorites for Rookie of the Year.

And with Tio now running the show, the Fuel Masters have zoomed to contention in the second of three yearly tournaments, presently at fifth-place at 5-4. They even rang off five wins in a row before their streak was stopped by even-hotter Converge FiberXers.

“Actually, I’m comfortable saying that Phoenix is ​​the perfect spot for me. For sure,” he shared. “I wouldn’t wanna be anywhere else other than Phoenix. Grab talaga yung trust from coaches to teammates. I’m grateful for them all.”

The 24-year-old’s getting to his next level away from Katipunan isn’t a knock on previous coach Tab Baldwin, though. Not at all. In fact, it’s yet another proof that the multi-titled mentor prepares his players to be pro-ready contributors who are team players, through and through. Look at Gian Mamuyac in Rain or Shine Elasto Painters. Look at Nieto twins Mike and Matt with the Elasto Painters and NLEX Road Warriors respectively. Look at SJ Belangel in the Korean Basketball League.

For four seasons, Tio was more often than not, the super sub for dynastic Ateneo Blue Eagles, spelling lead guards in Nieto and then Belangel. His best showing was last year, when he normed 7.9 points, 1.9 rebounds, and 1.4 assists, and he never topped any of those statistical averages in any other season.

For sure, there were countless times when he shined bright — even scoring 14 points in perfect 6-for-6 shooting in his very first game for the blue and white. When he didn’t, he was nonetheless a key cog in that juggernaut Baldwin built.

Tyler Tio looks to have already formed a strong relationship with Phoenix Super LPG coach Topex Robinson, who hailed the former Ateneo Blue Eagle as “a blessing that landed on their lap” in the PBA Season 47 Draft. PBA Media Bureau

“One thing I really learned in Ateneo was how to make the most of minutes I was given. I was playing behind really good guards so whenever I was given the opportunity, I made sure I did my job,” he narrated. “I think that’s something I try my best to carry on to the pro level.”

After Season 84, Tio decided to turn pro. Decided to bet on himself in the draft. After one round, his name was yet to be called. After another pick, he was still available.

Then with the second pick of the second round, 14th overall, it was Phoenix’s first crack at the rookie selection process. And boy, were they glad the player they wanted and needed was right there for the taking.

“Tyler was a blessing that landed on our lap during the draft. He’s a smart and intelligent player who’ll get the job done. Coming from coach Tab’s system was also a huge plus,” detailed Robinson. “The moment we got him, I told him he’ll be a vital piece in our team. I’m excited for what the future holds for him.”

The always-amiable coach was telling the truth. Indeed, after announcing their selection and his newest player was right there beside him on the team table, Robinson told Tio about the Fuel Masters’ big plans.

“I was very surprised, honestly. He told me right after he drafted me he was gonna start me. He said, ‘We’re really looking for a starting PG,'” recalled Tio. “I didn’t know what he meant. I thought I had a chance to compete. He repeated it to me after three or four practices. He said, ‘I already told you I was starting you.'”

Averaging 13.3 points, 4.0 assists, 2.1 rebounds, and 1.2 steals so far in the 2022-23 PBA Commissioner’s Cup, Tyler Tio is one of the favorites for Rookie of the Year alongside Blackwater Bossing’s Ato Ular. PBA Media Bureau

Yes, the long-time Ateneo sixth man, who had six starts to his name in his four seasons in the UAAP, was given the keys to a Phoenix car that had just lost its driver in Matthew Wright.

“It’s not like they were handing me the starting spot. It was a healthy competition. It was making each other better,” he remarked. “Pero yungchallenge sakin ni coach Topex, actually, it doesn’t matter who starts. His challenge was who was gonna finish the game. I’m enjoying the challenge. As a competitor, you wanna be out there, helping the team as long as you can.”

And so, despite having reliable veterans like RJ Jazul and RR Garcia, as well as another promising prospect in Aljun Melecio — before he was traded to the FiberXers — Robinson gave the ball to Tio. Slowly but surely, he caught on. And then, he caught fire, as he was hailed as PBA Press Corps Player of the Week last month.

His coach gave him his shot. He took it. Hey made it. He hopes to keep taking and making it.

“This is all because of the culture Phoenix has. Everyone knows the saying that a coach makes or breaks a player. If a coach believes in you, that’s everything,” he exclaimed. “As a player, all you need is an opportunity, and when you get it, it’s up to you to make the most of it. The fact that coach is giving me an opportunity is everything to me.”

There’s something being built in the hues of teal and blue. Tyler Tio is turning out to be the hidden gem of the latest draft, and perhaps the crowning jewel of Phoenix Super LPG’s continued contention.