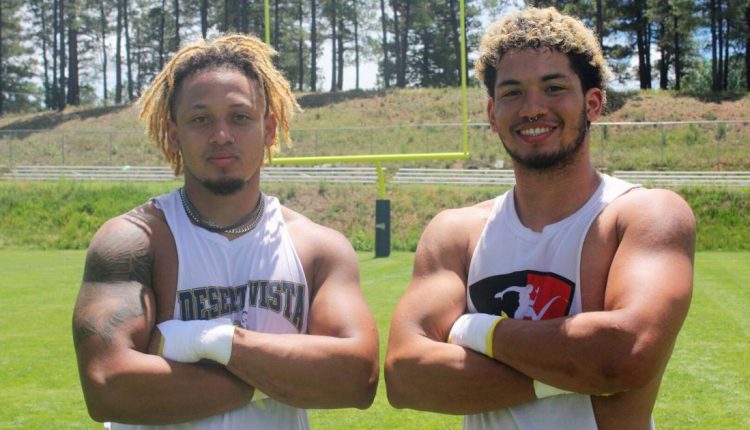 Tyson and Devon Grubbs haven’t yet had a collision on the Lumberjacks practice field.

“He’s not ready for it,” Devon said of his older brother.

“No, you’re not ready for it,” Tyson responded, chuckling.

The brothers, separated by two years, are now teammates on the Northern Arizona football team. Tyson is a running back in his third season, and Devon is a recent graduate from Desert Vista High School in Phoenix set to enter his freshman year as a defensive back.

The pair excelled for two seasons together with the Thunder, and they often played the same position — at times scoring touchdowns and rushing for major gains in the same games from the running back spot — but are on opposite sides of the field now.

For two seasons Tyson moved his way into the rotation at running back with the Lumberjacks. Meanwhile, he secretly hoped his brother, who was starting to impress Division I college coaches, would end up in Flagstaff.

“I hinted at it, but I wanted him to make his own decision and follow his dreams and what he wanted to do. I was so hyped when he told me he was coming here, though. Everyone wants to play with their brother,” he said.

That instant connection — though Devon did explore his options — ended up playing a role in getting him to Northern Arizona.

“It was a big thing I was looking forward to. We had a lot of fun in high school, and the idea of ​​playing with my brother, even though we’re not on the same side of the ball, it’s like a dream,” he said.

Coach Chris Ball is happy to have both on the field, too.

“It’s awesome. Tyson’s having a great camp so far, and I’ve been very impressed with the way Devon’s playing,” he said. “He’s very athletic and tough. He’s a really good football player.”

Now in the same colored jersey again — though the offense and defense technically clash hues in practice — the duo has begun to push each other. Part of that is easy, as they play separate sides of the ball. If one unit makes a play, it comes at the expense of the other, making it easier for the latter to see what they need to improve upon.

“He had his first interception yesterday. Even though it was a bad play for the offense, I was like, ‘Wow, that’s big-time.’ So I was excited for him,” Tyson said.

Devon is still making his way at the college level. With just a couple of weeks of official practice behind him, there have been challenges at first. The two have spent time lifting and working out together in the summer, however, to try to give him a running start.

They still talk often outside of practice, about football and everything else. That support has made the younger brother’s transition a bit easier.

“It’s been great so far. I love that there’s not just one or two players who can match my energy. It’s the whole team, especially Tyson,” Devon said.

And, already a hard worker, having a family member on the roster is a responsibility that Tyson said pushes him even more.

Whether that means one has to hit the other hard at some point in drills or not is yet to be seen.

“It’s really motivating knowing when I wake up in the morning that it’s not just me anymore. I know there’s my teammates, but I have to set an example for my little brother especially,” Tyson said.

Northern Arizona is set to visit Tempe to play at the Arizona State Sun Devils in the season opener on Sept. 1.