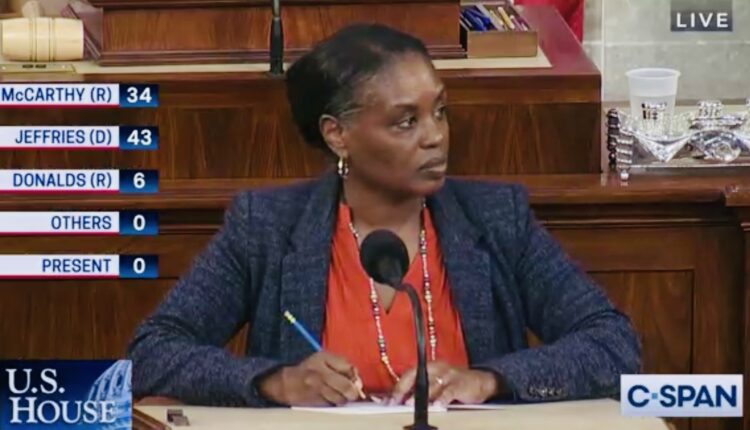 WASHINGTON — U.S. House Republicans’ stalemate over who should lead the chamber for the next two years dragged on Wednesday, with Kevin McCarthy failing to get the votes needed to become speaker on three more ballots.

The chamber then adjourned until 8 p.m. Eastern to give the House GOP a chance to meet privately, though House Republican leaders had no clear plan to garner the support of the members who have vehemently opposed McCarthy.

The second day of floor votes saw 21 GOP lawmakers vote against the California congressman, despite ongoing efforts to turn members to his side. That was an increase of one from Tuesday, with Indiana’s Victoria Spartz now voting present.

Until McCarthy wins enough votes, or the House elects another speaker, members-elect cannot be sworn in, meaning that while the 118th Congress is technically underway, the House has no members and no agreed-upon rules under which to operate, such as how legislation is brought to the floor. The clerk of the House has been conducting the proceedings.

Nebraska’s Don Bacon said late Wednesday afternoon that some Republicans are putting together a back-up plan.

“There’s a group of us that know that plan B has to be worked on,” Bacon said on a call hosted by D.C.-based political organization No Labels, which advocates for bipartisanship.

Bacon wouldn’t reveal details about negotiations on a compromise candidate for House speaker. “We can’t be public about it for the time being,” he said.

A social media post by former Republican President Donald Trump in the morning didn’t sway the holdouts to McCarthy’s side when the chamber came into session at noon.

“Republicans, do not turn a great triumph into a giant & embarrassing defeat,” Trump wrote, adding that McCarthy would do a “good job, and maybe even a great job.”

Colorado Republican Lauren Boebert, a McCarthy opponent, called on Trump to reverse course during a floor speech in the afternoon, saying that the party should work together and “stop with the campaign smears and tactics to get people to turn against us.”

“Even having my favorite president call us and tell us we need to knock this off,” Boebert said. “I think it actually needs to be reversed. The president needs to tell Kevin McCarthy that, sir, you do not have the votes and it’s time to withdraw.”

McCarthy said before the floor votes that Republicans plan to keep talking and that he had the “same game plan as yesterday.”

“We’ll find an agreement where we all get together, and we’ll work through this,” McCarthy told reporters around noon.

On a call with select Republicans on Wednesday morning, McCarthy touted his support from Trump, according to a GOP aide.

“I’m not going anywhere,” McCarthy said on the call that he led with Majority Leader Steve Scalise of Louisiana and GOP Whip Tom Emmer of Minnesota.

The House held three votes for speaker on Tuesday before the chamber adjourned for the night in an unsuccessful attempt for Republicans to unify around a candidate.

McCarthy lost the backing of 19 members on the first two votes before Florida’s Byron Donalds joined the group of lawmakers opposing McCarthy’s bid for speaker during the third ballot, bringing the toll of opponents to 20.

McCarthy needs the backing of at least 218 House members, a challenging task at the moment, given he can only lose four votes amid House Republicans’ especially narrow majority. That means McCarthy and his backers need to get at least 17 of the 21 members who voted against him Wednesday to change their minds.

The GOP lawmakers opposing McCarthy rallied around Florida’s Donalds as their preferred candidate on the fourth, fifth and sixth ballots Wednesday, moving away from pushing for Ohio’s Jim Jordan during the second and third ballots on Tuesday.

Texas Republican Chip Roy got a standing ovation from the entire House chamber when he noted that nominating Donalds for speaker, along with Democrats’ nomination of New York Rep. Hakeem Jeffries, represented “the first time in history there have been two Black Americans placed into the nomination for speaker of the House.”

The House held a second full standing ovation after Roy said that “we do not seek to judge people by the color of their skin, but by the content of their character.”

But the GOP split over who should hold the speaker’s gavel continued throughout the afternoon with the vast majority of the House Republican Conference pressing for McCarthy — both during floor speeches and in what appeared to be tense conversations on the House floor.

Wisconsin’s Mike Gallagher, who nominated McCarthy on the fourth ballot, argued that the disagreement among Republicans was part of the democratic process, a clear attempt to rebuff criticism the party is in disarray.

“Sure it looks messy, but democracy is messy,” Gallagher said. “That’s a feature, not a bug of our system. We air it all out, in the open for the American people to see.”

The floor speeches, however, didn’t move Republicans any closer to actually electing a speaker.

McCarthy for the moment is staying put in the speaker’s race with the backing of 201 members of his conference.

Those voting for a speaker other than McCarthy were: Andy Biggs of Arizona, Dan Bishop of North Carolina, Boebert of Colorado, Josh Brecheen of Oklahoma, Michael Cloud of Texas, Andrew Clyde of Georgia, Eli Crane of Arizona, Donalds of Florida, Matt Gaetz of Florida, Bob Good of Virginia, Paul Gosar of Arizona, Andy Harris of Maryland, Anna Luna of Florida, Mary Miller of Illinois, Ralph Norman of South Carolina, Andrew Ogles of Tennessee, Scott Perry of Pennsylvania, Matt Rosendale of Montana, Roy of Texas and Keith Self of Texas.

Spartz, a potential candidate for an open U.S. Senate seat in Indiana in 2024, voted present.

Spartz said in a written statement that she changed her vote because House Republicans need to negotiate “until we have enough votes and stop wasting everyone’s time.”

“None of the Republican candidates have this number yet,” she said. “That’s why I voted present after all the votes were cast.”

President Joe Biden, when asked about the process Wednesday morning before leaving for a trip to Kentucky where he was joined by Senate Republican Leader Mitch McConnell, said it is “embarrassing” House Republicans hadn’t elected a speaker.

***UPDATED: This story has been updated to include details of another vote, the chamber ending its work for the day and comments from Rep. Don Bacon.

High Country Humane at capacity with an unprecedented number of animals