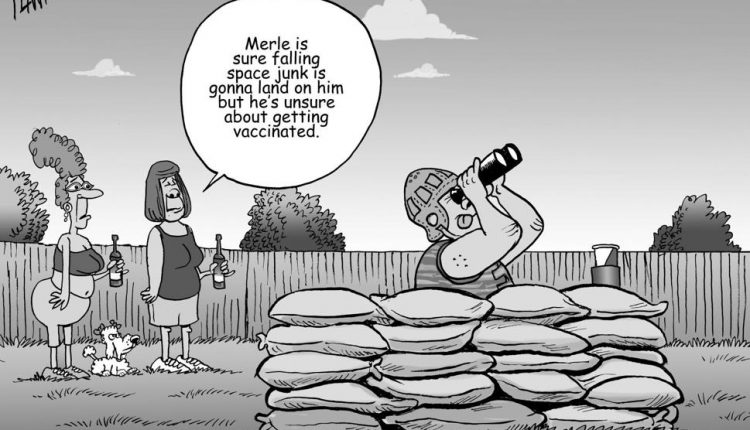 UFOs, are they watching us? | Editorial

Last Thursday night, many people saw something strange in the sky over Navajo County. Dozens, if not hundreds, of lights (apparently on board fast-moving ships) raced in a straight line across the sky, according to witnesses. Local sightings have been made at Show Low, Pinetop, and Taylor.

“Dozens of strange lights” were seen near Summer Pines on Show Low, near the corner of US Highway 60 and State Route 260, around 9pm Thursday night, according to an eyewitness I spoke to Friday morning.

They said the lights weren’t fast, they moved in a line. As the line stretched longer and longer, they said, “The lights at the front of the line multiplied from the air. Lights just appeared. “

According to the observer, there were at least 30 lights in the sky and one was moving in the opposite direction under the long line of light.

When the witness stopped and got out of his vehicle, “the lights just scatter in all directions and go – poop.” Added: “They stayed in this line until they disappeared.”

In Phoenix, Fox 10 Television reported, “FOX 10 viewers across Arizona reported seeing a trail of light in the sky on the night of May 5th. Some viewers say that at least 100 lights were moved across the sky in a single line of file; others claim to see them move from west to north. “

Sightings were also reported in Queen Creek, Surprise, Lake Pleasant and Duncan, also around 9 p.m., but the night before, on Wednesday.

On Friday morning, FOX 10 even posted a 19 second video of the moving lights on their website, recorded by Ameliana Garcia. They also posted two more videos of the lights submitted by viewers in the Phoenix area.

In the past, SpaceX’s Starlink satellites have been reported as a source of similar lights. The National Weather Service in Seattle said the Starlink launch Wednesday from the Kennedy Space Center in Florida is the likely cause of the phenomenon.

While this is hardly the first time “UFOs” have been seen in our state, did you know that there is a local chapter of MUFON, The Mutual Unidentified Flying Object Network, here on Show Low?

In a written Facebook message, MUFON responded to the lights: “Yes, it was the Space X Starlink project. They are internet satellites. Thank you for contacting us. “

So maybe they weren’t alien spaceships, but I need to know what they’re building. It has to be a huge project to be seen with the naked eye across the country.