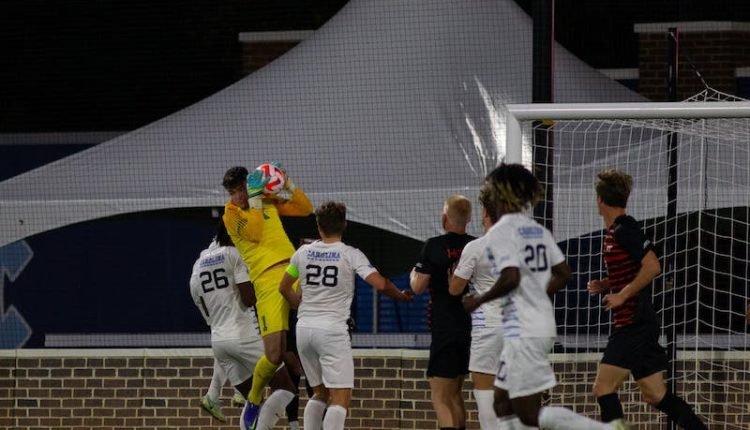 The Phoenix put pressure on early, taking the initial possession away from UNC and working the ball into their attacking third. On Elon’s first attack, sophomore midfielder Scott Vante blasted a shot from outside the goal box, which fell into the hands of redshirt first-year goalie Andrews Cordes.

In the 29th minute, the Phoenix would snap the standstill. After receiving a cross-pitch pass, Mason Duval found himself one step behind UNC’s backline and the senior forward blasted a shot into the bottom right corner of the goal.

Both squad’s attacking units would go cold for the remainder of the first period, and Elon entered the half leading by one.

Out of the break, both offenses remained quiet. It took until the 81st for the next shot to be taken, when junior forward Jack Dolk’s header snuck past the outstretched arm of Cordes. Dolk’s first goal of the year helped the Phoenix open up a two-goal lead.

Moments later, Dolk found himself with another promising opportunity. After working the ball into UNC’s goal box, Vante lined a cross-box pass to Dolk, who chipped in Elon’s third goal with his right foot.

The late goal proved to be the final scoring play of the night, and the Tar Heels dropped the midweek tilt, 3-0.

Elon’s backline shined throughout the night, holding a typically stagnant Tar Heel attack to a mere three shots. While the Phoenix countered with only five shots themselves, Elon was efficient in his strikes with three tries finding the back of the net.

In the attack, Dolk led the way for the Phoenix. The junior from Sweden came into the bout with zero goals to his name this season, but in less than 90 seconds he netted two shots to help extend Elon’s lead to three.

When was it decided?

After both teams held lengthy possessions in their attacking ends, the Phoenix opened up the scoring with Duval’s strike midway through the first half. Though North Carolina has overcome one-goal deficits this season, Elon’s score appeared to give the Phoenix an extra boost for the remainder of the match.

Elon built upon its lead in the second half with Dolk scoring two goals in the 81st and 83rd minutes. The Phoenix’s three-goal advantage late in the game ended any hopes of a comeback for the Tar Heels.

Why does it matter?

As the regular season winds down, the importance of each match heightens — both in the eyes of the NCAA tournament committee and for the sake of building momentum. Heading into the night, a win against the Phoenix was expected from North Carolina, considering the Tar Heels had never lost to Elon.

The defeat not only marks UNC’s first loss to the Phoenix in program history but further illuminates North Carolina’s recent troubles on defense. After surrendering two goals against NC State on Friday, the Tar Heels’ backline struggled again, allowing a season-high three goals to Elon. The once stout unit will need to regroup quickly with the ACC Tournament looming.

When do they play next?

The Tar Heels continue their road trip with their final away conference game of the regular season against Boston College. Friday’s contest is set to kick off at 6 pm

To get the day’s news and headlines in your inbox each morning, sign up for our email newsletters.