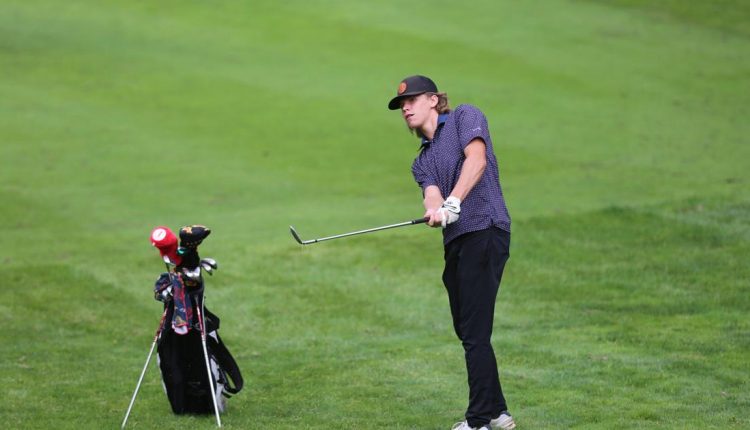 The Flagstaff Eagles boys golf team is undergoing what coach Joth Jacobson calls a “generation change” ahead of the fall season.

Four of the team’s top five scorers last season were seniors, including Tor Jacobson and Morgen Quotskuyva, who qualified for the 2021 Division II state golf tournament in Tucson in October.

Now, the team will mostly be led by underclassmen, including a crop of talented sophomores. They hope to create their own legacy in the coming seasons, starting this fall.

“We had a group of kids that played from their freshman year to senior year and kind of were the foundation. Now, it’s a new crop of kids — some experienced and some just learning for the first time — which is exciting,” Jacobson said.

There are a sort of clear-cut top few golfers, including sophomore Payne Lowry, junior Caleb Holgate, sophomore Sean Pablo and sophomore Jax Hickey. However, the order each of them qualifies for competitions, as well as who takes up the final spots on match days, is totally up for grabs.


Part of that is because the top is very even early in the preseason.

“We’re all in the same range, we get close scores to each other,” sophomore Sean Pable said.

“I know my top three, and after that it’s pretty open. There’s lots of opportunity, lots of chances for kids to make the team and play big matches,” Jacobson added.

Despite its overall youth, there is a feeling the Eagles are starting to become more solid over the past few weeks. There are many multi-sport athletes on the Flagstaff roster, but Jacobson has seen them become more invested in improving their golf abilities.

“It’s fun to see them really committing to it at an early age and take that time to get better,” he said.

It may be a slow start to the season, as many of the top players will be taking those spots for the first time. So the Eagles are focusing on internal improvement, not necessarily comparing themselves to other teams for a while.

The idea is to grow as a group and maybe become a contender as time passes. Doing so will require a significant change in practice and coaching style.


“I think last year it was more about making the good players even better, and now it’s developing players to a good level, and then maybe we’ll take that next leap. We’re working more on the fundamentals, making sure these guys get the experience, starting to get the scores down and having them get a good feeling about the game,” Jacobson said.

He believes that if the Eagles can have a player or two get hot toward the end of the season and reach the state links again, the year will have been a major success.

He joked that a trip to Tucson in late October is always nice, compared to Flagstaff’s fall.

But, as it stands, the Eagles hope that if they play their best, they can make a leap and be a legitimate contender.

Flagstaff was set to compete with Coconino, Page and Prescott in a multi-team match in Flagstaff on Thursday.


Get local news delivered to your inbox!