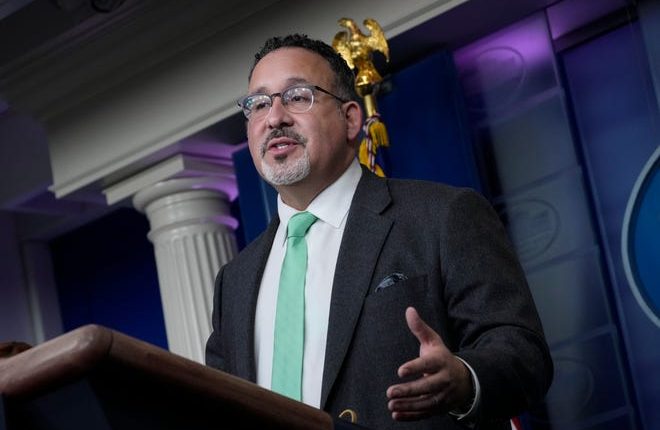 The head of one of the largest for-profit universities in the country suddenly resigned months after taking the post.

George Burnett was appointed the president of the University of Phoenix in February, and at the time the university spoke highly of his “deep understanding of our purpose of helping working adults acquire a higher education.”

But new documents obtained exclusively by USA TODAY show that Burnett’s departure came after an inquiry by the Department of Education.

Specifically, the department had questioned Burnett’s time overseeing Westwood College, a for-profit college based in Westminster, Colorado with run-ins with federal and state regulators over deceptive advertising among other concerns. Some of those cases helped lead to the federal government canceling $130 million in student loan debt tied to the deception of Westwood College students.

The Department’s requests included questions about how long Burnett worked at the college and its parent company, Alta Colleges, Inc., but also his role in the school’s advertisements, recruitment strategies and job placement reports. Burnett was also the CEO of Alta Colleges.

The department also said it found credible evidence that admissions officers at Westwood were trained to use “emotional triggers” when talking to potential students and that they were “trained, directed, or encouraged to not take ‘No’ for an answer from the prospective student .”

“Did you participate in or attend Westwood’s training sessions for its admissions representatives?” read one of the 17 questions sent to Burnett.

Andrea Smiley, a spokeswoman for the university, confirmed that Burnett had departed and that Chris Lynne, the university’s chief financial officer, will serve as interim president. Smiley also confirmed the Education Department’s inquiry.

“Because Mr Burnett believes this request could take some time to address, and not wanting to distract from the university’s mission of providing career-relevant higher education to working adults,” Smiley said. “He has stepped down as president and board member of the university, effective June 1, 2022.”

When asked about the inquiry, Education Department spokeswoman Fabiola Rodriguez said the department had a “duty to enforce its regulations and as part of that work we sent a letter asking a series of questions related to Mr. Burnett’s tenure while at Westwood Colleges.”

USA TODAY was not immediately able to reach Barnett for comment.

The University of Phoenix is ​​one of the nation’s largest for-profit providers of online college education. It currently has about 75,000 students, and it received about $930 million in federal money meant for student financial aid in fiscal year 2020-21. At its peak, the university had about 470,000 students in 2010.

The news comes as the Education Department ramps up its oversight of colleges that take federal money and deceive students. Just this week, the agency and the Office of the Vice President announced the federal government would cancel nearly $5.8 billion in student loan debt for students who had attended the now closed Corinthian Colleges, a for-profit university with a long history of fraud.

“While our actions today will relieve Corinthian Colleges’ victims of their burdens, the Department of Education is actively ramping up oversight to better protect today’s students from tactics and make sure that for-profit institutions – and the corporations that own them – never get again away with such abuse,” said Education Secretary Miguel Cardona.

The University of Phoenix has also found itself on the subject of federal inquires. In 2019, the institution settled a case with the Federal Trade Commission worth nearly $200 million. The agency said the online college falsely told students it had partnerships with major companies like Microsoft, Twitter, and Yahoo! that would lead to jobs.

But at question in the Department of Education inquiry was Burnett’s role in managing Westwood College, a chain of for-profit colleges owned by Alta Colleges Inc. Westwood closed in 2016 after being dinged repeatedly by state and federal investigations.

Burnett was the president of Alta College, but left in 2011. He went on to manage Northcentral University, a private university in California before taking the University of Phoenix job.

What did Westwood College do?

The Education Department’s inquiry was not related to the University of Phoenix. Rather, the agency had requested more information from Burnett because of his role overseeing Westwood College and the associated borrower defense claims, documents show.

Though Westwood closed in 2016, the federal government in 2022 still canceled the federal student loan debt of students who had attended. The agency discharged the debt through the borrower defense rule, a federal initiative that can refund students their student loans if they prove their college defrauded them.

In total, the department has erased about $130 million in connection to borrower defense claims from students who attended Westwood.

Colorado attorney generalsettled a lawsuit in 2012 with Alta Colleges over what the state described as “deceptive business practices” that included misleading students and deceptive advertising. That led to the institution to pay out $4.5 million, $2.5 million of which went directly to students.

And the Illinois attorney general filed a suit against Westwood College in 2012 that stated the college decided criminal justice students about their chances to “become police officers in Illinois, and misrepresented students’ ability to transfer Westwood credits to other schools.” The state settled the case in 2015, and that resulted in the institution forgiving $15 million in private student loans for students.

Sen. Dick Durbin, a Democrat from Illinois, has also called on the federal government to cancel the debt of students who were defrauded by Westwood College. And Illinois Attorney General Kwame Raoul did the same in May. A group of student advocacy groups also sued the Education Department in May to try and force the agency to clear the debts of Illinois students who had attended the university.