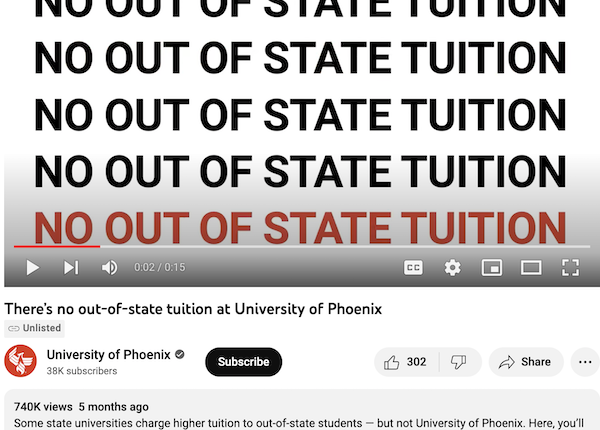 The University of Phoenix has been running a national advertising campaign that suggests to prospective students that the school is a public, state-operated institution, when in fact it is a private, for-profit operation. The ads, therefore, seem to violate a 2019 settlement agreement with the Federal Trade Commission in which the school’s owners agreed that their future advertising would be “non-misleading.”

The campaign from the University of Phoenix, with video ads on YouTube, Facebook, and presumably elsewhere, touts, “No out of state tuition.” The ads have been running for at least five months.

The school, long the country’s biggest for-profit college — at one time it was getting $4 billion annually in taxpayer-funded student aid — makes the same claim on the admissions page on its website.

“Out of state tuition” is a concept applicable to state-operated colleges and universities. It refers to the fact that many state schools, in order to benefit their own state’s residents, charge lower tuition to students considered “in-state,” than they do to students coming from somewhere else. Prospective students are often disappointed that a desirable public college in another state would charge them the more expensive out of state tuition; Hence the appeal of the Phoenix statement that it won’t charge such higher amounts.

But the term “out of state tuition” has no general usage or meaning in the context of for-profit schools.

The text accompanying the video continues, “Here, you’ll enjoy the same fixed, affordable tuition from the start to finish of your program, regardless of which state you live in.”

People seeing that pitch from the University of Phoenix could thus easily believe, wrongly, that it is a state-run school, and also an affordable one. In fact, it isn’t that affordable either. The school’s annual cost is $13,038, well below the mid-point of $19,526 for four-year schools, but significantly higher than the average cost of in-state tuition at state schools, $10,423. And by saying the school doesn’t charge out of state tuition, Phoenix suggests it is charging in-state rates.

Moreover, the University of Phoenix’s eight-year graduation rate is just 27%, so for the 73 percent who don’t graduate, the school is certainly no bargain.

The deception is even worse because the school has been caught deceiving students before, and it was expressly promised not to do it anymore.

In December 2019, the University of Phoenix and its parent company, Apollo Education Group, agreed to pay $191 million to resolve Federal Trade Commission charges that the company engaged in deceptive acts when it ran ads giving the false impression that the school worked with companies including AT&T, Yahoo!, Microsoft, Twitter, and the American Red Cross to create job opportunities for its students and tailor school programs for such jobs.

It was the largest financial settlement ever between the FTC and a for-profit college. In the agreement, Phoenix stated that it did not admit or deny the FTC’s claims. Andrew Smith, then the Director of the FTC’s Bureau of Consumer Protection, said at the time of Phoenix’s conduct, “Students making important decisions about their education need the facts, not fantasy job opportunities that do not exist.”

The University of Phoenix agreed in the settlement to a permanent injunction with the FTC that included a specific obligation not to make “any representation… about the benefit or outcome of any [educational] product or service… unless the representation is non-misleading…” “No out-of-state tuition” sounds like a benefit to me.

The University of Phoenix has not responded to a request for comment.

The University of Phoenix has a long history of deceiving, abusing, and overcharging students, and, in doing so, sometimes violating the law. The FTC should not shrug off this latest deception, an abandonment of the company’s legal commitment. Nor should law-breaking Phoenix get the benefit of the doubt here from other federal government departments — Education, Defense, Veterans Affairs — that have been sending billions in taxpayer dollars to this for-profit school and entrusting to it the futures of people across the country, often leading to bad outcomes. For its repeated violations, the University of Phoenix should be kicked out of federal student aid programs, period.

The Biggest, Buzziest Conference for Health Care Investors Convenes Amid Fears the Bubble Will Burst