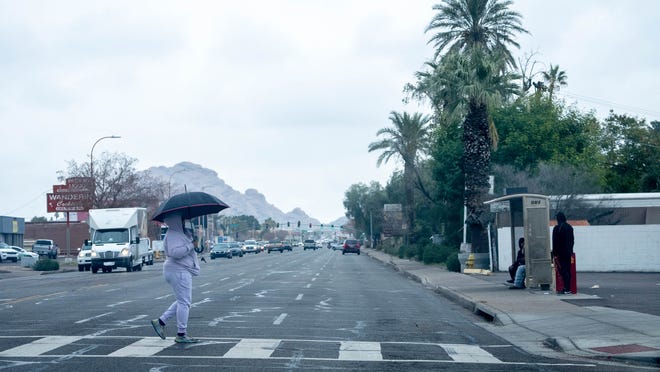 A winter storm warning has been extended until Tuesday evening for the northern Arizona regions above 5,500 feet in elevation, according to the National Weather Service.

Arizona Department of Transportation announced Sunday evening that State Route 64 was closed between mileposts 241 and 268 near the Grand Canyon due to winter weather conditions and related vehicle crashes.

The total accumulation of snow through Sunday night until Tuesday evening is predicted to be between 8 inches to 2 feet in Flagstaff and Williams.

The north rim of the Grand Canyon and surrounding northern areas are expected to accumulate eight to 18 inches of total snow. Other areas such as Heber-Overgaard, Show Low and Springerville are expected to receive between 2 to 6 inches of snow.

Sunday night is when snowfall is expected to begin, but will only be bringing in less than an inch throughout most areas of the High Country.

“Monday afternoon is right now looking to be the most intense snowfall with again a couple more inches to add on top of what we already have received,” said Paige Swenson, Flagstaff National Weather Service meteorologist.

Monday is the most hazardous travel day, however, the National Weather Service said that roads will be slick and snow-covered from Sunday until Tuesday.

Winds through Tuesday will be around 15 to 25 mph, but there could be gusts upwards of 35 mph which will result in blowing snow and poor visibility on the roads.

Rain and melting snow have potential on Tuesday to cause minor flooding for areas below 5,500 feet. Swenson warned that there is potential for rockslides in highly prone areas around Oak Creek Canyon, Highway 89 and south of Black Canyon City.

Spotty power outages could result from the winter storms in the northern and eastern parts of the state.

In response to heavy snowfall, the first day of classes on the Northern Arizona University Flagstaff Mountain Campus has been postponed to Wednesday of this week.

The National Weather Service recommended residents to “winterize” their vehicle, pack an emergency supply kit and avoid all nonessential travel during the high-impact winter storm periods, which will occur Sunday through Tuesday.

Swenson said conditions are expected to improve starting Wednesday with a slight chance of snow showers to return Thursday and Friday.

Road conditions can be checked at AZ511.com and the latest weather forecast can be found at weather.gov/FGZ.