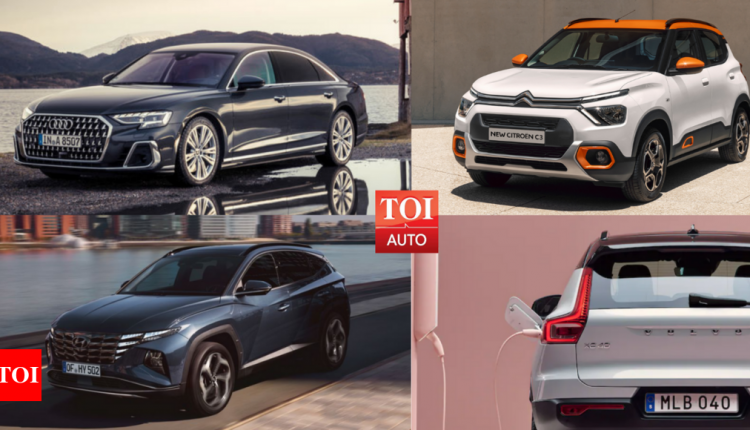 2022 has been a year of some big car launches in India, especially the month of June, which saw a host of debuts, including the Mahindra Scorpio-N, new Maruti Suzuki Brezza, Hyundai Venue facelift, Toyota Urban Cruiser Hyryder, and the Volkswagen Virtus price reveal. July is expected to be big on launches as well, with some noteworthy cars lined up for either a launch or an unveil.
Here is a list of all the cars that are set to make their debut in the country this month –
Citroën C3
Citroen is all ready to launch its second product in India this month, ie the C3 hatch – pricing of which will be revealed on July 20. Citroen has opened bookings for the car, and the C3 has also started arriving at dealerships.

At launch, the C3 will be available with a 1.2-liter naturally aspirated petrol unit (82 PS/115Nm) and a 1.2-liter turbo-petrol motor (110 PS/190 Nm), available with a 5-speed MT and a 6 -speed MT respectively. Pricing for the car is expected to start from around Rs 5.5 – 6 lakh (ex-showroom).
Hyundai Tucson
Hyundai has confirmed that the India-spec Tucson SUV is all set to be unveiled on July 13, with a launch expected in August. Upon arrival, the Tucson will go on to become Hyundai’s flagship SUV offering in the Indian market.

Apart from the radical design changes, the new-gen SUV is also expected to get tons of new tech like a 10.25-inch infotainment system, a similarly sized instrument cluster, a tri-zone climate control, ventilated front seats, a panoramic sunroof, as well as Advanced Driver Assistance Systems (ADAS).
Volvo XC40 Recharge
Based on the XC40 SUV, the fully-electric XC40 Recharge was originally scheduled for a launch last year. However, the debut was postponed and is now all set to take place on July 26. The e-SUV will be offered with a dual electric motor setup with a combined power and torque output of 408 PS and 660 Nm.

The Volvo EV has a claimed range of 418 on a single charge, and can support up to 150 kW of fast charging that can juice up the battery from 0 to 80% in around 40 minutes. A 11 kW AC charger can charge it from 0 to 100% in 8 – 10 hours. We expect the XC40 Recharge to be priced around Rs 75 lakh (ex-showroom).
Audi A8L
Audi is set to launch its flagship sedan A8 L in the Indian market on July 12, with bookings already open at dealerships and online. The Mercedes-Benz S-Class and BMW 7 Series rival is expected to cost around Rs 1.5 crore (ex-showroom).

Apart from the new sharper design, the new A8 L is expected to get tons of features like a 10.1-inch infotainment touchscreen with a 8.6-inch curved display placed right below for the climate control and seating functions, to name a few. The A8 L will likely be powered by the 3.0-liter turbo petrol engine with mild-hybrid tech putting out 340 hp. .