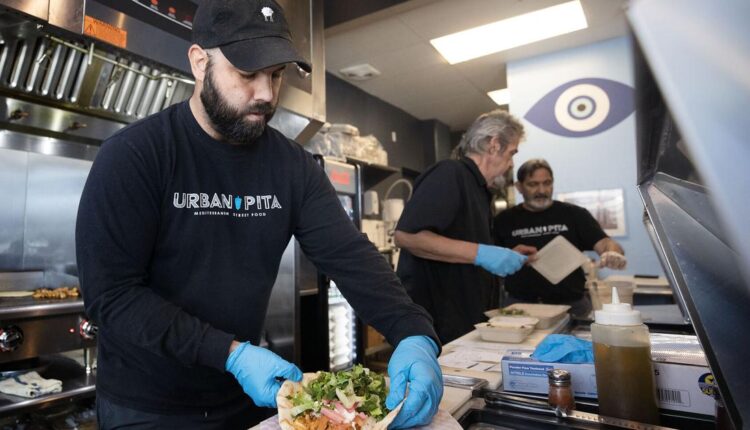 Urban Pita, a downtown destination for Mediterranean street food, will soon see a second location on Tucson’s east side.

Owners of the grab-and-go concept, known for its chicken shawarma sandwiches, gyros and other quick bites, have picked out a spot at 6320 E. Golf Links Road, in the Safeway Plaza at South Wilmot Road.

Freddy ElMesselmani, who opened Urban Pita downtown six years ago at 345 E. Congress with business partner Jeff Baker, said expansion was always in the cards for the business.

“People complain that they don’t like coming downtown when they are not working,” he said. “They don’t like the one-way traffic, the walking, the parking.”

El Messelmani and Baker chose East Golf Links over other parts of town primarily because of its proximity to Davis-Monthan Air Force Base.

“The base brings in a lot of business,” El Messelmani said. “A lot of people come from deployment and they are familiar with the food.”


ElMesselmani and Baker first opened Urban Pita downtown to cater to the late-night crowds, whose options were limited. The restaurant is open until midnight Mondays-Wednesdays and until 3 am Thursdays-Sundays.

“The closest late-night food option was The Grill and that closed down a long time ago,” ElMesselmani said. “Shot in the Dark Café wasn’t at its prime. This was a necessity.”

Urban Pita took off right away as a place to eat for folks leaving neighboring bars and venues, such as Hi-Fi, the Rialto, Club Congress and The Funky Monk.

Tucson’s east side is not necessarily known for its nightlife, but ElMesselmani said they will probably still keep the location open until at least midnight on most nights.

“I think people will come,” El Messelmani said. “Most everything else down there closes at 9 or 9:30.”

The menu will also stay the same: a mix of flatbreads, salads, sandwiches and combo plates based around four proteins: chicken shawarma, steak shawarma, gyro and falafel.

Urban Pita is opening a tapas restaurant in the space once occupied by Fired Pie, 350 E. Congress St.


ElMesselmani said Urban Pita’s east side location is the first of several planned locations throughout Tucson. El Messelmani and Baker are hoping to open spots on the northwest side and on the south side over the next few years.

ElMesselmani has also signed a lease for the former Fired Pizza location at 350 E. Congress, across the street from Urban Pita downtown, where he plans to open a Basque-style tapas restaurant next summer.

ElMesselmani said if all goes well, they plan to have Urban Pita’s east side location open by February.